Critical Hours: Search and Rescue in the White Mountains

I was startled a few years ago when the man training me in CPR, a very safety-conscious person who had saved many lives, declared flatly that there were no accidents. 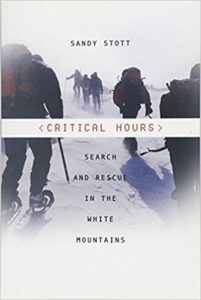 No accidents? What could be more preposterous, I thought. “What about car accidents,” I asked with moderated sarcasm, “don’t they fit the bill?

Car crashes are not accidents, he replied. “They always could’ve been prevented with adequate forethought or risk assessment. Yes, that could mean not passing, not taking a certain road or not driving at all, but if that’s the cost of your life, it’s worth it.” I grudgingly had to admit he was probably right.

Sandy Stott makes the case for prudence more firmly in his book Critical Hours: Search and Rescue in the White Mountains, a compendium of heroism and hubris in New Hampshire’s Presidential Range. The hubris comes from hikers who perished (or nearly did) near those peaks, and over the course of the book their tales tumble together into an avalanche of poor choices and missed cues. The heroism comes from the hundreds of dedicated volunteers and professionals who test their own limits as they yank injured, dazed or frozen people from the jaws of danger again and again.

In recent years, search and rescue has become more necessary and more challenging, writes Stott, himself a seasoned hiker and former editor of the Appalachian Mountain Club journal Appalachia. The promise of safety from cell phones, locator beacons and other high-tech devices has made recreational hikers, and sometimes even experienced ones, overconfident. And the hell-bent, triathlon-before-breakfast extreme fitness culture has turned to mountains paths for endurance training.

Critical Hours is partly a history of hiking, from the Romantic era forward, and of search and rescue efforts when the hiking goes awry, as well as the culture behind each, partly an inquiry into why we ascend summits and partly a biography of Mount Washington—all wrapped around a series of rescue stories Stott analyses for lessons.

The mistakes take many forms: not knowing the weather forecast, hearing but ignoring it, being fooled by mildness at the base, setting off too late, being experienced or poorly equipped and leaning over a waterfall. A missed trail sign, glove dropped or twisted ankle can snowball into full-blown crisis. While most of those who make such mistakes live to tell about it, the rescues are not always pretty or even truly necessary. My favorite numbskull is the large man who reported a badly sprained ankle, which required alternating teams of 12 men to carry him down in a litter—and then, in the parking lot, pronounced himself better and got up and walked away.

Trouble above the tree line is not confined to the clueless or naïve, Stott tells us, noting that even Henry David Thoreau nearly lost the trail in a fog on Mount Washington. Even legendary climbers of the Whites are not immune. One famous hiker, Bill Curtiss, was so strong and fit at age 67 that doctors could not believe the deep musculature of his chest. Unfortunately, their discovery came during an autopsy. Curtis was consumed by winter’s fury atop Washington.

Stott is well equipped to narrate the tragedies.. Born into a family of hikers—his father performed one of the rescues in the book — he is steeped in the history and culture of the White Mountains. And insightful about why some of us are driven to extreme challenges.

He is very good at describing the twilight dimming effect of hypothermia of the body, how it slowly robs first our physical, then our mental, faculties. Indeed, the weather is almost a character in this book, and its personality is fickle and sometimes cruel as it teases or deceives us about its true intentions.

Self-awareness, the ability to see and take in actual conditions, regardless of preconceived thoughts or expectations, and alertness to potential perils, Stott says, is the only the way to avoid becoming an anecdote in any sequel to this book. A little fear doesn’t hurt either. In Moby Dick, the second mate, Stubb, declares that he won’t allow a man in his whaleboat who doesn’t have a healthy fear of the whale.

Those who ignore the perils will likely be rescued by the large and increasingly professional network of private and government rescuers. But these teams have their work cut out for them. Prometheus was in bad enough shape when he had merely stolen fire from the gods. Now that we, his descendants, have GPS, emergency locator beacons and various other high-tech gizmos, it seems inevitable that the vultures will have a lot more picking to do.

Richard Higgins is the author of  Thoreau and the Language of Trees.

Comments Off on Critical Hours: Search and Rescue in the White Mountains