Posted on June 18, 2018 by Margaret Carroll-Bergman | Comments Off on Apples

Some might wonder – why write about apples in late spring? Surely, that’s for the autumn, when we, here in New England, can think of little else. Well, perhaps it’s more that apple trees, rather than apples themselves, are speaking to me right now. 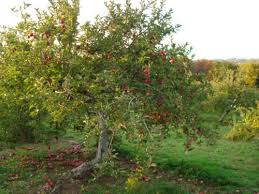 Their distinct shape is particularly noticeable at this time of year in late spring. There they are, small, wide, kinda gnarly-looking, prepubescent, gawky and tween-like. I grew up in the southeast of England, where apple trees are common in the back-gardens (yards) of suburban homes. At least, we had one.

Our back-garden was a delight; maybe 30x15ft, the neighbor’s stone garage making half a boundary to the left, a tall wooden fence and our coal bunker forming one to the right. The far end, for many years, looked onto what I saw as a big vacant “field,” but which was really an overgrown space in-between housing parcels, the last vestige of the field that existed before all the houses on “Longfield Road” were built. To me, as a young girl, this area which extended beyond the safe confines of our well-tamed garden, was a thrilling, wild, land of mystery, which the grown-up Thoreauvian in me still feels. My brother, 3 ½ years older than I, would camp out there with his friends, but only occasionally would I myself venture in.

I remember, it was this wildness at the back of our house which made our house unique to me. We were the only ones who had this extra “space,” and it gave me a sense of freedom from suburbia which I loved. Our house was also special to me because of the view from the front: from my bedroom window, as we were the only house with no house built directly opposite us, I could see way off into the distance, across the “Green Belt” fields, even spying, on a clear day, an ancient windmill in the next small town over.

My mother filled the front garden with flowers: roses, irises, red-hot pokers, daffodils and tulips, and she lined the pathway with pansies, and all manner of small, colorful plants. Roses were abundant in the back garden, too, and honey-suckle cascaded over the fence near the kitchen window, whose deep-scented aroma filled my girlhood summer evenings. But the back garden was dominated by two glorious trees: the apple and the pear. Mum and Dad planted the trees the year they moved into the new house, and the trees and the house aged together. Over the years, the garden filled up with red currant, black currant, and gooseberry bushes, even a huge, rambling blackberry bush whose soft, sun-warmed fruit was there for the snacking all summer long. But right in the middle stood the glorious, old, white-blossomed pear tree, alongside the pink-blossomed apple tree, both providing fruit and beauty from early spring to late fall. They grew taller and taller, wider and wider, and dad had to constantly prune, just to keep them manageable, until I noticed a turn; Dad couldn’t stop cutting, and the trees grew smaller and smaller, eventually, I realized, becoming a symbol for the axe-words which were cutting my parents’ hearts on the inside of the house.

And yet, the apple tree, along with all the other fruit in the garden, provided so much sustenance. Mum would say, “take the colander, and go get…,” and off I’d go, gathering apples for Sunday dinner’s pie, or rhubarb for that night’s “grutze.” Growing up in-between the wars in Germany taught my mother a thing or two about living off the land. Thoreau would have approved, I think. I now live in Stow, Massachusetts, or “Apple Country,” as it’s known. A transplant, just like the apple tree.

Lorraine Martin is the membership coordinator for the Thoreau Society.

This entry was posted in Environment, General, The Roost. Bookmark the permalink.