The Tree That Tamed Me

Posted on June 26, 2018 by Margaret Carroll-Bergman | Comments Off on The Tree That Tamed Me 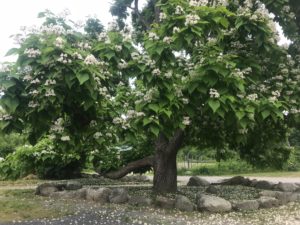 The most prominent tree at Thoreau Farm, Birth House of Henry David Thoreau, is a tall and splendid Northern Catalpa, located beside our parking lot. It lends grandeur and scale to not just the 1878 Kitchen Garden, but to the entire property.

The Northern Catalpa is a fast-growing native tree with rot-resistant wood. She is one of the first features visitors see, and often they pause with her before moving on to the house.

Its trunk and branches can tend to twist and bend. Ours has a large branch a few feet above and parallel to the ground, that bends and swoops like an elephant’s trunk, tempting visitors to touch and pat her as they walk by.

Before the birth house opened to the public for the first time in 2010, we oh-so-wise board members agreed: that Catalpa tree should be cut down. However, for reasons none of us can actually recall, it was left standing. Looking at her, I am awash with relief, though no one now can remember what we were thinking when we all voted to have her removed.

“My life is monotonous…I’m rather bored. But if you tame me, my life will be filled with sunshine. I’ll know the sound of footsteps that will be different from all the rest…The only things you learn are the things you tame…” The Fox to the Little Prince

Because I created, manage, and tend our Kitchen Garden, I spend scores of hours annually near this tree. Bit-by-bit, she’s slowly “tamed” me, and I’ve come to adore her in every season. She’s a sweet friend who smiles over the garden. I have come to need her in my view.

But I have a confession to make: I used to heartily dislike Catalpa trees. I can’t quite say why. Their long, dried “string bean” seed pods make a mess. I found the enormous leaves too big to please my personal esthetic. And those flowers: I found them from a distance to be quite tacky.

But I’d never seen the blooms up close before, which totally revolutionized my view of Catalpa, and began my seeing our tree in a new light. She’s very amenable to a face-to-flower close-up for anyone taller than four feet, taming with her sultry and copious blooms in snowy white with orange and purple markings on their throats. They grow in lovely clusters, which decorate the tree in beautiful profusion in June. They have a light scent that for me is almost touches a memory I can’t quite grasp before the smell dissipates.

I still am not a fan of those seed pods, which can be up to 20 inches long! They fall in equal profusion in the fall. Between flower and pod fall, the leaves shed in the fall, too, after turning a stunning yellow. Any tree that requires three clean-ups a year (one each for flower, leaves, and pods) is what I consider “high maintenance.” But it turns out, I think she’s worth it.

And when the time to leave was near: “Ah!” the fox said. “I shall weep.” “It’s your own fault,” the little prince said. “I never wanted to do you any harm, but you insisted that I tame you…” The Fox and the Little Prince.

The Catalpa is not a long-lived tree, some living only 50 years, though they can live much longer in the best conditions. We had wondered how old ours was, and working in the garden one day a few years ago, two visitors provided clarity. They were a pair of the Breen sisters, part of the last generation of children who grew up in the house, daughters of the farm’s last private owner. They revealed that the tree was planted to mark the birth of their youngest sister. It’s in that way we learned the tree’s age, now around 65 years. Given that the Northern Catalpa typically grows to a height of 40–60′ with a spread of 20–40′ at maturity (according to the Arbor Day Foundation), we can see that our tree has likely reached her full glory.

This past fall, a storm brought down a massive branch, really an entire section of the tree. We discovered that our Catalpa is not fully well. In fact, her main trunk has become hollow, which can just barely be seen by looking up at the gaping hole that’s opened in her torso, located over six feet above ground. This tree’s time is perhaps not immediately neigh, but her end moves into sight.

When I think of her no longer gracing that spot, I am touched by grief. Despite her failing strength, she bloomed magnificently this year with her usual timing. I ponder that if I had never had the chance to fall in love with her, I wouldn’t have become so sad at her anticipated departure. But our relationship was entirely worthwhile; now no other Catalpa is “our” Catalpa, as the time I’ve spent with her has made her special to me.

I muse about the possibility of replacing her with another special tree, something native – perhaps a blight-resistant American Elm or Chestnut? But that would be a tree I haven’t met yet – one that is not yet special to me.

Said the fox, “Here is my secret. It’s quite simple: One sees clearly only with the heart. Anything essential is invisible to the eyes.”

Deborah Bier is a rabid gardener and a board member of Thoreau Farm Trust. She is a best-selling author and a dementia behavior specialist.

This entry was posted in Environment, Henry David Thoreau, Literature, Nature, The Roost. Bookmark the permalink.