This month, as we transition into 2018, the various social and political challenges addressed in the book What Would Henry Do? published by Thoreau Farm Trust last year in time for Henry’s 200th birthday, loom today no less significant.

This unique collection of 41 essays — by many of this century’s great Thoreauvian thinkers — ponders critical issues by speculating how Henry might respond to them. After a stressful year of disruption on the national and international scene, the essays in our book might be more essential for us all to contemplate now than at any time in each of our lives. 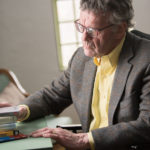 As I explained in my introduction to the book, back in Henry’s time “societies in every corner of the earth had long been dominated by agriculture, ensuring a life where most everyone remained in one place from birth to death, living on and working off the land just outside one’s door. You interacted with the same friends and neighbors day in and day out, you thought the same thoughts, adhered to the same credos, held similar assumptions.

Today, at the dawn of a fresh year, we’re faced with the same sort of questions. How we answer them will either solve or exacerbate the many problems of our times. So on behalf of the Thoreau Farm Board of Trustees, I invite you to join us as we facilitate a dialogue throughout the coming year via panels and discussion programs, or by engaging with our blog, or during a quiet visit to Henry’s house and/or Walden Pond, or simply carrying the ideals and messages of Henry with you as move about the many corners of the earth.

Who can be found between pages of our book? For starters there’s: Wicked author Gregory Maguire; Laura Dassow Walls, (author of the current best-selling Thoreau biography, Henry David Thoreau: A Life);  Larry Buell, author, (most recently, The Dream of the Great American Novel) and expert on Transcendentalism, Emerson and Thoreau; Robert D. Richardson, author of acclaimed biographies of both Henry and Ralph Waldo Emerson; Frank Serpico (yes, that Frank Serpico, former New York City police detective); actor-activist Ed Begley Jr.; and a former U.S. president who goes by the name of Jimmy! And many more.

Available at Amazon, Barnes & Noble, the Shop at Walden Pond, the Concord Bookshop and independent bookstores throughout the US and Canada.

Ken Lizotte is President of the Board of Trustees at Thoreau Farm and lives in Concord, Massachusetts, with his family.

This entry was posted in General, Henry David Thoreau, Literature, Living Deliberately, The Roost and tagged What Would Henry Do?. Bookmark the permalink.