Editor’s Note:
This article originally appeared in The Concord Journal May 14, 1942. The writer, Ruth Robinson Wheeler, updated it for The Thoreau Society Bulletin #31 April 1950. “The Thoreau Houses” was updated in 2017 by her son, Joseph Coolidge Wheeler, a Thoreau Farm Trust Board Member

It takes a little hunting to locate all the houses in Concord, which have Thoreau associations.

John Thoreau, Henry’s grandfather, had been a successful merchant in Boston. His second wife was one of the six brothers and sisters of the Kettell family of Charlestown, who hired the Wright Tavern to run as a bakery. Deacon John White married Esther Kettell in 1778 and lived in the house, which is now the southwest end of the Colonial Inn, so when John Thoreau married Rebecca Kettell in 1797, he knew of a similar house, which now forms the opposite northeast end of the same inn. This was owned by Ammi White, a cabinetmaker, and had been built about 1716 by Mrs. White’s great-grandfather, Col. James Minot. The Whites sold it in 1799 to John Thoreau, who sold out his business at the head of Long Wharf in Boston for $25,000 — a tidy fortune in those days, enough for a man of 45 with five children to retire on. Though Grandpa John died in 1801, this remained the home of his family — his daughters, and his son John, Henry’s father. John was then 14 and soon went to work in Deacon White’s store. Later in 1835-1837 when Henry was in his last two years at Harvard, his immediate family lived here with aunts.

Henry’s grandfather Dunbar (maternal side ) died in 1767 in Keene, N.H., and 11 years later, Henry’s grandmother Mary married Deacon Jonas Minot of Concord and came to live with her children, Cynthia and Charles, at the Minot Farm. 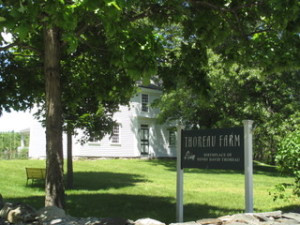 This was a comfortable old farmhouse then located at 215 Virginia Rd. The house is still standing but it was moved in 1878 several hundred yards to the east where it still stands at 341 Virginia Rd. It is owned and operated by The Thoreau Farm Trust.

When Jonas Minot died in 1813, the widow Mary Jones Dunbar Minot inherited the “widow’s third,” which included the east half of the house. Her daughter Cynthia had married John Thoreau in 1812. John had tried keeping a store, which stood at the present site of the Town House and probably lived above the store. 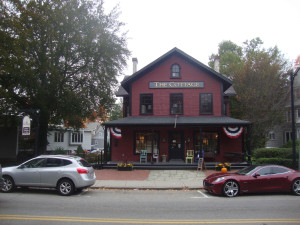 Building where Henry’s parents kept a store and most likely lived. Now located at 15 Monument St.

This building was sold at auction to John S. Keyes in 1850. He moved it to its present location at 15 Monument Street.

Widow Minot asked her son-in-law to run the farm for her, while she moved down to Lexington Road to the “old red house”. 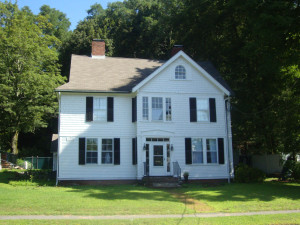 This house, now painted white and much enlarged is at 201 Lexington Road. It is called The Captain Thomas Wheeler House. She lived in the east half until she died in 1830. This house is opposite the Concord Museum.

Henry David Thoreau was born on July 12, 1817 in the old Minot house when it was still at 215 Virginia Road. In his Journal under the date of December 27, 1855, he wrote, “I was baptized in the old Minot House by Dr. Ripley when I was three months old and did not cry.”

The next spring, John Thoreau gave up the farm and lived with his family for seven months in the west half of the house where Cynthia’s mother lived on Lexington Road. Then came the move to Chelmsford, where the Thoreaus lived next to the meetinghouse; and the move to Boston in 1821. Back in Concord from 1823 to 1826, the family lived in the “brick house” probably the one, which stood on the corner of Main and Walden streets but was torn down. At this time, I believe, John Thoreau worked at pencil making with Charles Dunbar in a little shop, which stood near the present Scout House. 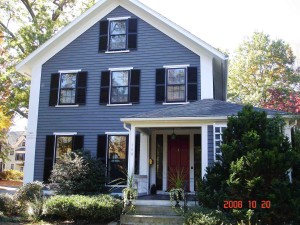 This shop now forms the kitchen ell of the Tuttle house at 128 Walden St. 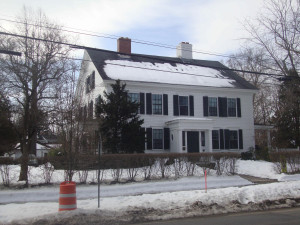 They then moved across the street to 185, which was then a simple square house.

Here they lived for eight years and from here in 1833 Henry entered Harvard, rooming in Hollis. In 1835 his family moved in with the aunts on Monument Street.

In 1837 the family moved to the old Parkman house. This house was moved in 1872 when the public library was built. In this house, Henry Thoreau began his school, wrote his first lecture, his first journal and his first essay. 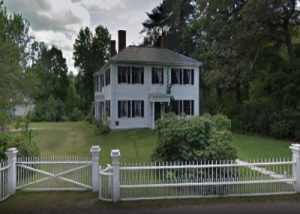 From here he took his trip up the Merrimac in 1839 and from here he went to Emerson’s house, at 28 Cambridge Turnpike in 1841 to live for two years.

When he came back from Staten Island in 1843, the family moved to a combined house and shop on Belknap Street where the family lived until 1850. Thoreau meanwhile was at Walden from July 1845 to the fall of 1847 and at Emerson’s through 1848. Belknap Street was then called Texas Street because Texas was very much in the news at the time when the railroad and the new station were built in this district. The Texas house no longer exists.

In August 1850 the family bought “the yellow house,” now standing at 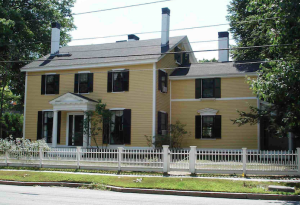 255 Main Street. The present ell on the right was built later by the Alcott’s. There was an ell at the rear, which the Thoreau’s used for the secret part of their pencil making process. Here Henry David Thoreau died on May 6, 1862, and here his sister, Sophia, carried on the graphite business, for several years. She died in 1876.

The Concord Library has photographs of the old Minot farm house, brick house and Parkman house and they may be seen in THOREAU by Henry Seidel Canby. You can find the brick house in the background of Main Street in 1862 (page 10) and the Parkman house (which no longer exists), on the Main Street side beyond the library (page 102).

This entry was posted in General, Henry David Thoreau, The Roost and tagged Thoreau Farm, Thoreau Houses. Bookmark the permalink.