I am thinking today of people who live in terrible times, when whatever good we summon or create in our daily lives gets threatened by the bile we and others also harbor. And so it’s no stretch to think of Henry Thoreau living in the 1850s a decade crawling with evil and aimed surely at civil war. And I think of his huge, complex mind and attendant spirit and wonder how he rose each day to work to write to walk without being washed away by sadness. He could see so much. What sustained him?

I ask myself this question on a day similarly riven, when I feel split from country and future, when my imagination’s gone quiet before despair, when my quiet belief in innate decency fails. I didn’t go to work today; it seemed so beside the point. But after a day of sitting here, I’ll have to get up and go…where?

Well, yes, there to the work I’ve committed to and I’ll keep at it as compact with self and known others. Its daily motion will be salve of a sort.

These few days in and on, I know I will also return to personal struggle with despair. How to go at it? Thoreau sought both to address his time’s evils and live a life with joy at its center. He did not turn or hide away – he looked directly at slavery in its many forms, from primary evil to enslavement of self. In many ways, he even tugged apart some of the nature he revered – to know it, understand it, perhaps, sometimes, to change it (at least the human part). And still, as he walked out into the world each day, he brought and found reverence. 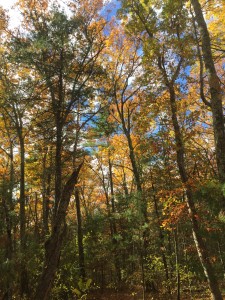 Afoot in the forest

Early in his writing, in the essay, The Natural History of Massachusetts, Thoreau set down what sustained him throughout:

Surely joy is the condition of life. Think of the young fry that leap in the ponds, the myriads of insects ushered into being on a summer evening, the incessant note of the hyla with which the woods ring in the spring, the nonchalance of the butterfly carrying accident and change painted in a thousand hues upon its wings, or the brook minnow stoutly stemming the current, the lustre of whose scales worn bright by attrition is reflected upon the bank.

It is no small feat to be a keen analytic intelligence, stern moralist and giddy walker. So much encompassed in one being.

I am no Thoreau. But I must try to walk like him.