Out out…even as most are turning in. Down to the sea, flat, windless, blue, with only a jiggle of waves’ reminder, and its seems a day to aim for little islands, to press against the incoming tide for a while, before riding its last push in.

By Black Rock, along the east shore of Shelter, then aim for the humped back of the next little island; its firs look like raised fur on an archback cat. And as high tide nears, it offers a little white sand beach for landing. Thank you, I think I will.

I go ashore on Irony Island, its half-acre fine home for a former English teacher, even as he suspects that this isle is straightforward, simplicity itself, its name derived from the orange-streaked iron of its stone, and not from any duplicity, or turning upside down of words.

If there is any irony here, it lies in the white-splashed rocks at its top. There the orange stone gives way to small drifts of broken shells and white abstracts of guano. The gulls use Irony as anvil for clams they can’t open. And, once they’ve swooped down on their fill of the exposed, soft bodies, the gulls splash the remainders of their satisfaction and pleasure all over the rocks. A whitewash of Irony. 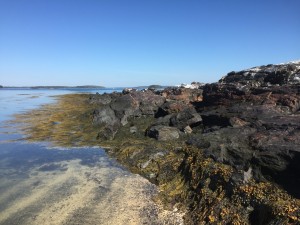 I’ve more islands to visit before turning with the tide, but for now, I’ll be here, on Irony; the gulls will be back when the tide drops and the clam flats open.

It is, when you’re there, a singular place. 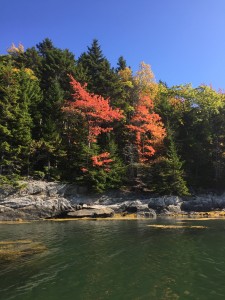 The island after Irony.