Mowing the Lawn – At a Cost

“Why should we live with such hurry and waste of life?” Thoreau, Walden, “Where I Lived and What I Lived For”

The front yard HAD to be mowed. I had cut the whole back yard a few days earlier. But with all of the rain we had gotten, the grass just kept on growing. Another storm front was on its way, and I had just a small window of time after work before the raindrops were sure to fall. I hurried home, filled the mower’s gas-tank, and yanked on the cord. Since the landlord had recently changed the spark plug and the air filter, the machine roared right up. It practically carried me along with it.

Usually I enjoy the act of mowing. I get a chance to take a closer look at nature. Most of my lawn isn’t grass, of course. The violets, clover, wild strawberries, creeping Charlie, oxalis, and black medic far outnumber any blades of grass. But isn’t diversity good? And from the street, who can tell? It’s all greenery. I think the variety is fun to see. And the bunnies, birds, and squirrels seem to appreciate it a lot, too.

But today I was driving angry, so to speak. The world was too much with me. I was turning thoughts around in my head: mostly from posts I had seen online, and mostly geared toward our tangled political scene. I should know enough to ignore such stuff. But today it had overwhelmed me. I was furious. I marched up and down my rows with determination, chewing on every little political exchange I had seen and participated in, in recent days. I wasn’t enjoying my mowing at all. Truth be told, I wasn’t even there. 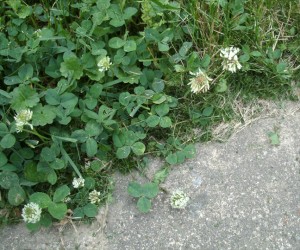 I swung around again to the patch of clover next to the sidewalk. Abruptly, I stopped; there was a big bumblebee scurrying among the flowers. I paused, waiting for him to finish his good work. I brake for all animals. Except that it seemed to be taking him a long time to attend to these flowers, and I quickly realized that he wasn’t flying from one bloom to the next. He was tiptoeing haphazardly around their stems. I bent down to take a closer look, still with my grip on the mower handle. In the next instant, I saw that only one of his wings, the left one, was buzzing. The right one stood still, and was cocked at an odd angle. It looked as if he’d gotten hurt somehow. Poor guy. And then the true horror dawned on me. It was my fault. I had run over him in the last pass-through. I hadn’t even seen him then. How could I have been so careless? 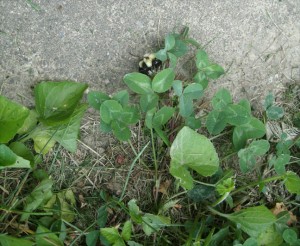 “I’m sorry, I’m sorry, I’m sorry,” I chanted to the bee. Darn it. I couldn’t do anything to fix this situation. A bee that can’t fly is doomed. And it was all my fault. Still, I had to finish the yard work. A pre-storm breeze had begun to blow, and the sky was growing dark. I mowed around the clover and apologized to the bee every time I came close. How could I have done such a terrible thing?

If you know me or read my posts here, you know that I’m an animal lover. I freely let spiders live in all corners of the house. (https://thoreaufarm.org/2014/08/down-came-a-spider/) I once relocated a misled mouse from the kitchen to the basement of Thoreau Farm (https://thoreaufarm.org/2015/10/henry-and-the-mouse/) I do my best to do no harm to my fellow planet-dwellers. And yet this time, I had let outside events play hard enough on my emotions that I hadn’t been paying attention to what I was doing. If this was a key lesson from the Universe, it was a particularly difficult one to bear.

“It sometimes happens that I cannot easily shake off the village. The thought of some work will run in my head and I am not where my body is – I am out of my senses. In my walks I would fain return to my senses. What business have I in the woods, if I am thinking of something out of the woods?” ~ Thoreau, “Walking”

Ah, you’re right, Henry. I was out of my senses. I hadn’t seen what was right in front of me. I let the ridiculousness of current events distract me. I should have known better.

After I finished the job and locked the mower away, I returned to the scene of distracted crime. The bee was still staggering around the clover patch. Sometimes he took a tumble and did a somersault or two because of the uncertain footing. I had grounded a pilot who barely knew how to walk. I had sentenced him to certain death. And still I kept apologizing, as if it would do him any good: “I’m sorry, I’m sorry, I’m sorry.” Every few hours I checked on him, as if in hope that he would shake off the experience and would suddenly take off and say goodbye. But we both knew this wouldn’t happen.

He made it through the light rain overnight, and he made it into another day. The last time I saw the bumblebee, he was sitting quite still on top of the violets. The broken right wing was now gone entirely. I wasn’t sure if he was even alive. But when I broke off a clover flower and put it down gently near him, he flinched a little bit. No, I’m not going to hurt you again, Bee. I’m sorry, I’m sorry, I’m sorry. He waved one of his antennas at me, or at the flower. By the following day, he was no where to be found. 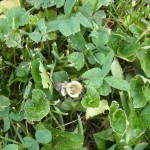 Days later, I admitted my awful deed to a friend. At first, he made light of the story. But when he saw how serious and upset I was about hurting the bee, he said quietly, “Did you do it in malice and with an intent to ill will?”

“Then you need to forgive yourself, as the bee has already forgiven you.”

The grass continues to grow. Soon I have to mow again. But this time, I’ll pay closer attention. I’ll leave the outside world to deal with itself and concentrate on my own little part of it. I would fain return to my senses, and to the person I know myself to be.

One response to “Mowing the Lawn – At a Cost”