Fuel for the Fool

Posted on April 1, 2016 by Sandy Stott | Comments Off on Fuel for the Fool

The prevailing color of the woods at present, excepting the evergreens, is russet, a little more red or grayish, as the case may be, than the earth, for those are the colors of the withered leaves, and the branches; the earth has the lighter hue of withered grass. Let me see how soon the woods will have acquired a new color. Thoreau, Journal, 4/1/52

Spring, even in this year’s halting version, makes me giddy. There’s a certain silliness that sometimes opens in my mind, like the first crocus, purple, outlandish against the dun leaves. That suggests today as a second first day of spring, the day the fool in me, in us, breaks ground.

Did they have April Fool’s Day when Henry Thoreau was alive? Two searches say…maybe: the first, predictably, is via everyone’s uncle, Google:

There I found lots of hits for the day, but little to say of it in America 1850. I did learn that my ancestors found pleasure in “hunting the gowk,” Scottish for the cuckoo, symbol of the fool. That day of sending people on phony errands was followed by Tailie Day, which was full of butt jokes – pinning a kick-me sign there, etc. And I found that celebration of spring’s pranks is worldwide…and of uncertain origin…appropriate for pranksters, for sure – most humor is of uncertain origin.

And so on to Henry Thoreau’s journals. I paged through 8 or 9 April firsts, scanning each entry for a hint of humor, the glint of a pun. But, counter to the clown spirit of our 4/1s, these entries are downright sober, the 4/1s of Thoreau’s 1850s full of precise observations and clear language; they are not so much purple against brown as rills of clear water after the season of ice. Spring’s rise also favors long entries and all manner of sightings brought in from long, afternoon walks. I took my cue. 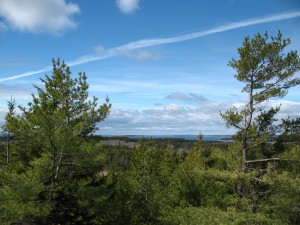 Along an April way, and on an April day.

And so to a walk: some 20 minutes in, laughter breaks out in a tree to my right. Though long used, as a teacher, to providing comic relief without intending to, I’m only ambling along under a grayish sky, not even humming or talking to myself. So, what’s so funny? And where is the laugher? But I know that laugh; it belongs to one of my favorite birds, a top five among the feathered tribe. It’s a pileated woodpecker, and even as I can’t find him amid the branches, he peels off another laugh. It’s not you (or maybe it is), he seems to say. It’s just, up here in the tree or out in the air, that kind of day.

And put that way, I guess it is. I walk on, leave the laugher behind…except that he stays in my mind.

And later, along a field’s edge, I see the 1st bluebird of spring, chip of sky, season’s new color blue against the tan grasses. No fooling!