This morning I got my boat out of the cellar and turned it up in the yard to let the seams open before I caulk it. The blue river, now almost completely open (i.e. excepting a little ice in the recesses of the shore and a good deal over the meadows), admonishes me to be swift. Thoreau, Journal, 3/8/55.

Often, we arrive at a season’s edge the way we revisit an old clearing. What, we wonder as we draw near, has changed? What’s the same? And so we go primed for comparison.

Still, when it comes to favorite places, we go too harboring a secret hope – may it be the same as I remember; may time and winter’s passage have been gentle, unremarkable; may I live again in this happy place. In a way, those hopes sum to another: may I feel the same in this place. Today, after loading the boat on top of the car (having reinstalled the roof-rack yesterday), I plan to go to the sun-inflected harbor with that hope.

That calendar winter endures even as its meteorological twin has vamoosed is fodder for street conversations across town. Even the piled residue where dutiful neighbors raked snow from their roofs dwindles to mere white accent. And little collapses of dirt along the trails show that frost is heaving from the ground; a few green shoots, freed from the straitjacket of frost, eye the sun.

And so, a little before eleven, Geoff and I set out for our nearest local launch site. Even as we raise the boats to the car’s roof, we can see the wind in the overhead pines; they wave vigorously. “Well,” says Geoff, “that’s the forecast. We’ll stay close to shore.”

At Simpson’s Point, we don’t even bother to get out of the car. The water’s roiled with whitecaps, and the wind blows directly on to the concrete tread that lets trailered boats into the bay. Next, we try Mere Pt three miles south along the peninsula. It’s rougher, and the seasonal dock we might shelter behind to launch is…well, seasonal…and so, not there. 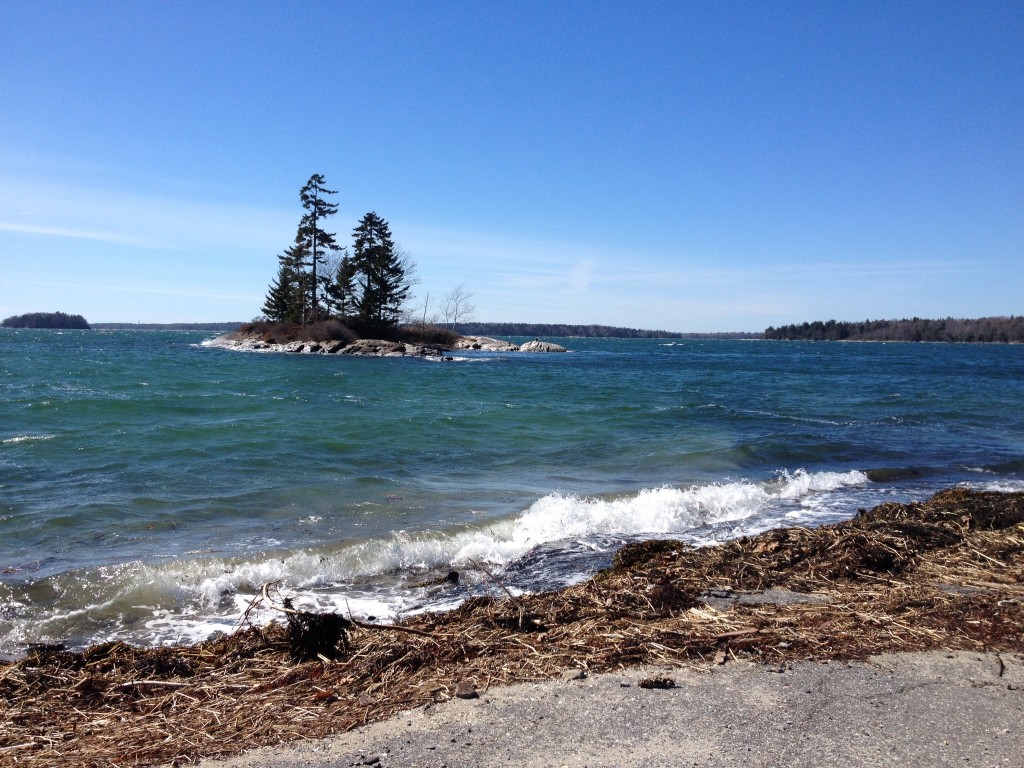 There’s enough prep time for paddling our kayaks, especially in cold water (today, a nearby buoy reads 39 degrees) to feel like an investment. So, we go a little farther afield, over to Lookout Pt. There, we know a little comma-shaped cove faces north, and so we’re pretty sure we’ll find enough shelter from the south wind to get into the water without being wave-battered.

Here, the south wind streams unimpeded up the bay, and it is honking (the same buoy that gave me the water temperature records a steady 20 knots, with gusts to 25). The water froths with whitecaps. But our little north-facing cove’s only shivered by the wind, and the water looks, as cold water will, crystalline. 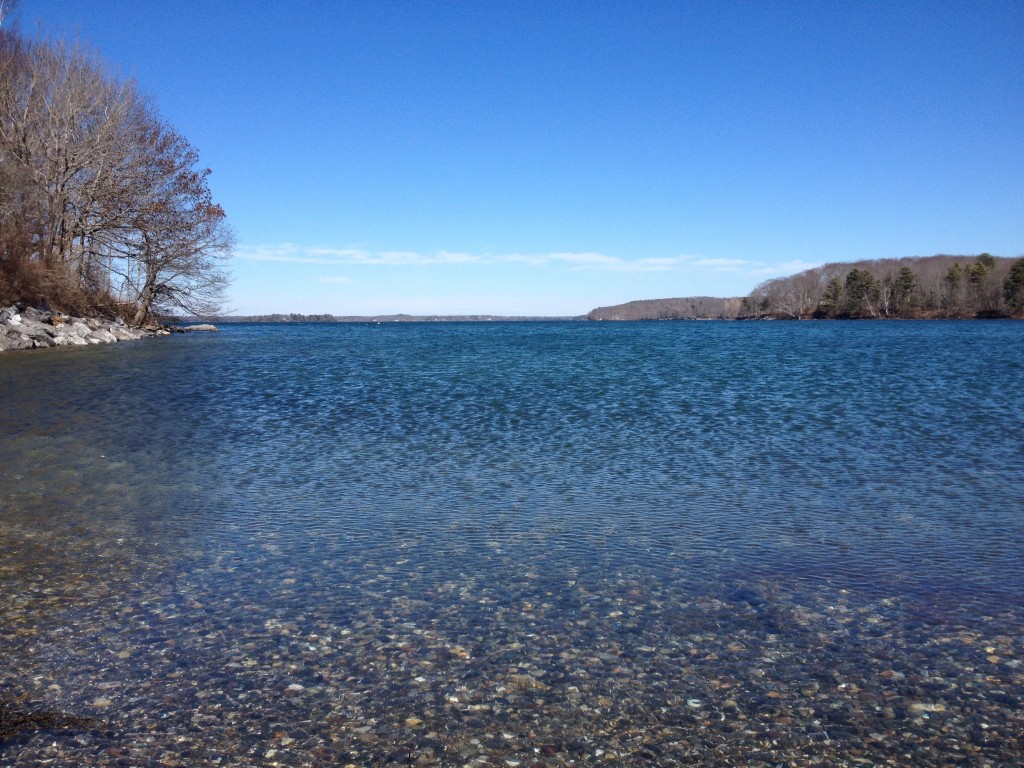 We gear up, tote our boats to the waterline and lever ourselves in. I ease off the sand, and, by the time I’ve attached my sprayskirt, the wind’s taken me 50 yards north. After months out of my boat, I feel the little wobble of rebalancing, and then, as I begin to paddle, angling toward the east shore, everything settles – the water lifts and jostles, and I make the hundred, familiar adjustments, relaxing down into sea and cadence. Soon, now out of the cove’s lee, I’m a part of the waves rather than subject to them. Geoff joins me and we run down fast with the wind, sliding and surfing down the waves.

An hour later, after exploring some small coves and cliffs still garbed with scraps of remnant ice, and after eliciting complaint from a large flock of overwintering Canada geese, we turn and fight our way upwind at a knot or so. The work is warming, pleasurable, even as the gusts nearly stall us. One sharp, green wave lifts before me; I press forward and it breaks over my bow and washes along the whole boat. It is the day’s spawn and the season’s baptism.