I was invited to a holiday dinner by a pair of new friends. They live in an expanding housing development that just a few years ago was still a field standing tall with corn. They gave me explicit directions to their townhouse. I was to follow Elmcrest Boulevard to Cobblestone Drive and then their street, Oak Leaf Drive. If I reached Field View Drive or Green Park Drive, I would have gone too far.

Although I had seen this neighborhood from a distance, I had never driven through it. I already suspected that I would see neither elm trees nor oak trees, and that I would not be able to drive or walk on cobblestones. And the “field view” wouldn’t be of a “green park.” It would offer the pleasing sight of endless garages and rooflines, or of mud and machinery and of other houses being built to fill in the empty spaces. I knew I wouldn’t like it. But if this is where these folks wanted to live, so be it. They were my friends, and they were nice enough to invite me to dinner.

When the time came, I made my way to the entrance of Elmcrest Boulevard. It wasn’t as grand as it sounded. And it had nary a straight stretch. Not even one inch. It wound through the place like a drunken sailor: first this way, and then that. Other cross streets turned off at each bend. I drove slowly and focused on the names on the signs, hoping to finally spot Cobblestone Drive. But when Emerson Drive showed up on my right, I started laughing. Really, THE Emerson? Ralph Waldo Emerson? Here in suburbia, almost 400 miles away from Concord, Massachusetts? I glanced at the clock. I had time. I could inspect how Mr. Emerson’s legacy was interpreted here. I made the turn onto Emerson Drive. 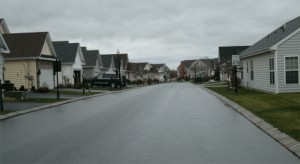 As I suspected, both sides of Emerson were filled with houses that were too close together. They were neat and tidy, and they all looked the same. Then Alcott Drive turned off to the left. I laughed again. I could picture poor Bronson shaking his head at the sight. The next left was Thoreau Drive. Of course! It had to be. I turned left. Here I was, driving along Thoreau. It looked just like Emerson and Alcott. Interpret this statement as you will. 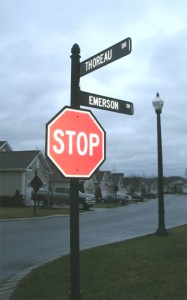 Obligatory stop at junction of Emerson and Thoreau

The literary theme continued. The streets leading off Thoreau were James Way, Dickens Lane, and Hemingway Lane. Then Emerson showed up again. It had circled around behind the rest. I turned left to get back to where I needed to be. I expected to see Alcott Lane again on my way back. But no. Hawthorne Lane had sneaked in ahead of Alcott. It turned out that Alcott and Hawthorne twisted around each other here. Interpret this statement as you will.

Emerson Drive soon became Walden Way. Really now, this was simply too much. 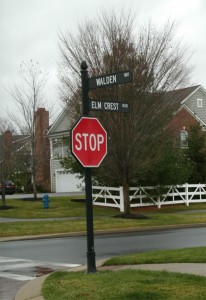 But to the developers’ credit, the road was just a short pass-through back to Elmcrest Boulevard. The only structure on Walden Way was a common building that fronted a pool and a series of tennis courts. Behind it loomed a small but muddy retaining pond. Once I passed these, I could make a turn and get back to where I needed to be. It took only a few minutes more to find my friends’ house. 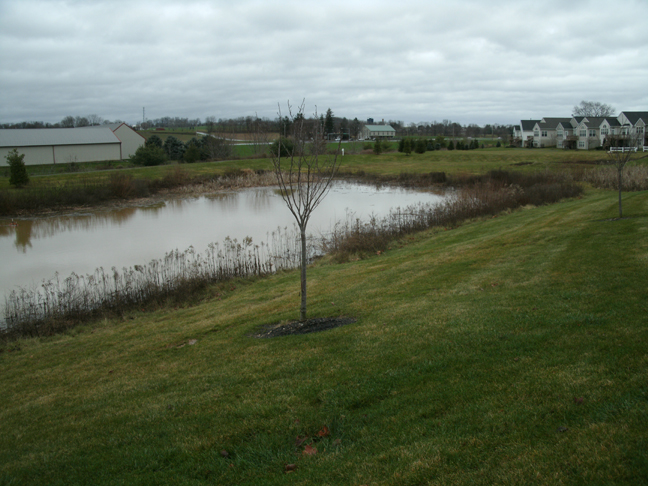 The dinner was great, and so was the conversation. We all ate too much. Soon the sun dropped behind the bulldozers parked behind my friend’s backyard. Clouds moved in. I thanked my hosts for their hospitality and headed home.

It wasn’t too dark yet. So I followed the Transcendental route again, this time in the opposite direction: Walden Way, Emerson and Thoreau, with a glance at Hawthorne, Hemingway, Dickens, James and Alcott. This time, I took pictures. I almost wanted to know who had named these streets and why. Were the choices meant as a true tribute to the authors? Or were they merely names to fill up signs? Did the residents know who their streets were named after? I was torn between feeling validated in my love for these writers and being appalled.

And even though it would be a great address to have, I knew I would never want to live along this version of Thoreau Drive. I’d rather live in a house on a street that’s older than me. One that has some character in its framework, and with mature trees towering over it. Many years will pass before you will be able to say this about my friends’ neighborhood. (If ever.) Still, such a discovery allows us a chance for a vicarious visit to the legacies of the Transcendentalists, in a place you’d never expect to find them.

Whether they’d be gratified or not, it turns out that the Transcendentalists are everywhere.

3 responses to “Finding Thoreau in Suburbia”