Locked Out of … or Locked In to Routine

I walked out the back door and closed it tightly behind me. Then I looked at what I had in my hands. My wallet, my pen, and my notebook. Something was missing. My hat, first of all. Anyone who knows me can attest that I always wear a cap when I go outside. This was distressing enough. But my ring of keys was missing, too. My keys! Uh-oh. I had just locked myself out of the house.

It was 7:30 a.m. I had already planned my morning. I would eat breakfast at my favorite local diner, which was a drive of about one suburban mile east. It would be good to listen to the usual background banter between the head waitress and other customers I knew. I could spend a leisurely hour there and do some creative writing at the same time. Then I would drive about two miles west to get to my 9-to-5 job. I would stop at a convenience store along the way to buy something for lunch or for a mid-day snack.

But now – no keys. No way to drive anywhere. I checked the back door of the house, and it was shut tight. Pushing and shoving it didn’t help. I walked to the front door, and it was sealed too. No windows were open, not even a smidgeon. I circled around to try the window above the kitchen sink. Nope, I couldn’t open it from the outside, either. My cat jumped up on the counter and meowed at me from the other side of the glass. She looked as if she wanted to help. Too bad she didn’t have the wrist-action necessary to turn the 1950s-era crank. What now? 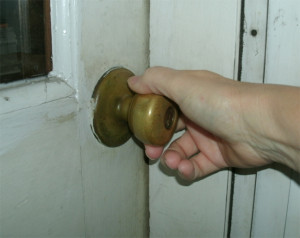 I knew of only two duplicate keys. One was in the hands of a friend who lived about six miles away. The other one belonged to the landlords, who lived about four miles further. I don’t carry a cell phone, and I hadn’t memorized the numbers for the key holders. At least I had money and my I.D. with me. I could take the bus to the friend’s house. But he had a lot of commitments these days, and there were no guarantees he would be home, even at this early hour. I decided instead to just start walking the one direct mile toward my workplace. I could call and e-mail both my friend and the landlords from there, after looking up their numbers online. And I could eat at another diner along the way. After all, this self-anger and mild distress was making me hungry. Off I walked.

I wasn’t fuming too much about my situation, but I was far from calm. In the grand scheme of the whole world, I knew being locked out of the house wasn’t as serious a problem as those that other people were facing today. This one was solvable. Still, I found myself charging down the street while thinking, thinking, thinking, to the quick beat of my heart and my feet. I had marched several blocks before I stopped myself. What was I doing? In answer, I heard, as I often do, from Henry Thoreau:

“I am alarmed when it happens that I have walked a mile into the woods bodily, without getting there in spirit. … It sometimes happens that I cannot easily shake off the village. The thought of some work will run in my head, and I am not where my body is – I am out of my senses. In my walks I would fain return to my senses. What business have I in the woods, if I am thinking of something out of the woods?” ~ “Walking”

The Universe had granted me the chance to walk more than 20 blocks on a perfectly nice and unseasonably warm day in early November. I should make the most of this opportunity. My house key issue would surely be resolved before noon. I had no need to gnaw on this bone. So, deliberately, I put it aside and enjoyed the rest of my walk. I said hello to people and dogs sitting on their porches. I caught sight of small homes and businesses I had never noticed before. I ate breakfast at a diner that I don’t normally patronize, and I got to hear all kinds of interesting talk going on around me. I filled up a page in my notebook. I made it to work a little after 9 a.m., completely unscathed and in a far better mood than I had been in an hour earlier. Then I spent most of the next eight hours typing into a computer database, searching online for additional information, and putting things away. Locked into my usual routine, as it were. But by choice.

“When sometimes I am reminded that the mechanics and the shopkeepers stay in their shops not only all the forenoon, but all the afternoon too, sitting with crossed legs, so many of them – as if the legs were made to sit upon, and not to stand or walk upon – I think that they deserve some credit for not having all committed suicide long ago.” ~ Thoreau, “Walking”

I contacted the landlords. One of them took a duplicate key to the house at lunchtime. He hid it in a place we had agreed upon. I could keep it as an extra so that this problem wouldn’t happen again. Life was good.

At closing time, one of my co-workers offered me a ride home; I politely turned her down. I thought I deserved another long walk – this time, in the growing dusk. And I took a slightly different route home, remembering Thoreau’s fondness for following circular routes in order to see continually differing landscapes. Now, aromas wafted out from the homes and businesses. Someone was cooking hot dogs. Someone else was doing laundry. The air above the sidewalk was briefly sweet with the lingering waves of the cologne of a passerby who nodded. I have to admit, though, that it felt strange not to have the weight of the keys in my hand or in my pocket. I felt lighter, but slightly off-kilter at the same time. (I’ll leave further analysis of the weight of the keys to you, dear readers.) And still, I said hello to people on porches who were doing last bits of business in the fading light.

“Warm, huh?” I said to a man who’d just moved his garbage bin to the side of a house.

He opened a front door as I continued on my way. To an unseen person, he yelled, “Hey, step outside here once.”

Yes, I thought as I kept on walking. Please step out. Breathe the air. Walk into the dusk. Had that person been locked in all day, too?

Full dark had descended by the time I reached the house. The shiny key was waiting in its hiding place. I unlocked the door, walked inside, and greeted the two cats, who immediately demanded to be fed. To them, it had just been another day. To me, it had been something special. Something I should do more often, and more deliberately. I just needed a nudge from the Universe to do it. 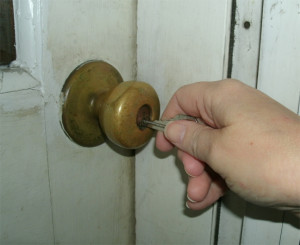 One response to “Two Gifts”