Tawny Grammar – Hearing the Leopard-wind on the Kerry Way

There are other letters for the child to learn than those which Cadmus invented. The Spaniards have a good term to express this wild and dusky knowledge, — Gramatica parda, tawny grammar, — a kind of motherwit derived from that same leopard to which I have referred. Thoreau, Walking

The old way to Killarney: first there is the music in the name; who wouldn’t want to walk toward Killarney, with its lingering “aaar” sound following the hard opening K? To say that I will spend the day walking to Killarney calls up a little mist of romance from my Gaelic ancestors, albeit Scots-Gaels, who are, the Irish tell me, a different sort of Gael. But in the larger world, a Gael is a Gael, and so a sliver of me feels at home here; that feeling will deepen as I reach the wind-washed, treeless mountainscapes later in the day. This will be a day on “the old way to Killarney,” a stretch of a path now called the Kerry Way, and every “old way” leads back as well as on.

As is true for many ways, to reach a semblance of trail on the Kerry Way, you must leave town. Kenmare, in this case. And after some early bumbling that almost sets me on the way to Sneem, I find the street that aims straight into the hills that rise above Kenmare, climbing through new housing that looks down on the town and then cresting the first ridge to find wire-girt fields with cows or sheep nosing about. Behind that ridge stretches a little valley of farms, and then above, there are the mountains that separate Kenmare from Killarney; my way makes for the mountains. 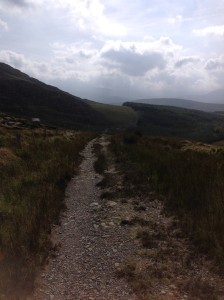 The way up from Kenmare

A few kilometers in, I’ve outwalked the tarmac, but not yet (never to?) the wires. Soon the trees too are gone, and sheep speckle two bony mountains that rise before me. A signpost assures me that I am indeed headed for Killarney; I hum a little made-up tune whose only word is “Killarney.” The aptly-named pass at Windy Gap draws my eye and then my feet, and I go up.

The Kerry Way is a 200+kilometer walkers-loop around the Iveragh Peninsula, which holds also the much more famous auto route, The Ring of Kerry. The Way was only completed in 1989, and as it meanders it also intersects with other walking ways that reflect a quiet surge of long-distance walkers among the myriad, motoring public. Chief among these intersectors is the E-8, which travels from Cork to Istanbul, over 2000 foot-miles away. And so a winding line of connection stretches out before me. 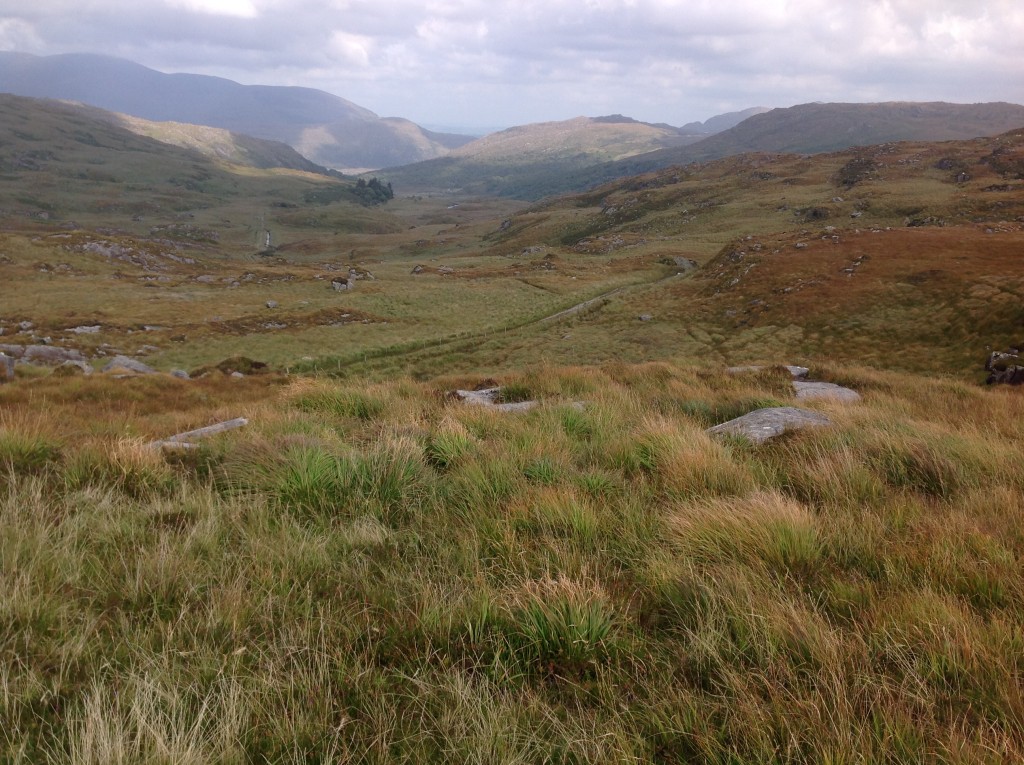 The way down the valley to Killarney

But mostly, I feel I am following the present into the past. The way to Killarney is foot battered, and it is more direct than the twisting, newer road that rises from Kenmare with the same goal. Why the new route doesn’t follow the old seems a mystery, but I am glad to be in foot-country and out of even aural contact with machines. The wind has taken over.

The day’s high point blows in at the pass between two knuckled mountains, Knockanaguish and Peakeen. The long grasses that grow the sheep ripple like water and the air washes and swirls uphill with a liquid roar, turning somersaults over the ledges, then leaving the downhill grasses on the other side untouched. Just as we find voice by pressing air over our vocal chords, so too does the wind as it calls against the grasses and rocks. It is a wild language, what Henry Thoreau calls a “tawny grammar” in his essay Walking. Mere words would fly away on this wind, scatter like bits of confetti; there is no writing this wind. It moves like a leopard. But there is listening as this cat-wind yowls the story of this old land, writes itself on the way to Killarney.

Click on this link to hear the wind, see its passage through the gap: IMG_0719