“In the Lee farm swamp by the old Sam Barrett mill site, I see two kinds of ferns still green and much in fruit. … To my eyes they are tall and noble as palm groves, and always some forest nobleness seems to have its haunt under their umbrage. Each such green tuft of ferns is a grove where some nobility dwells and walks. All that was immortal in the swamp’s herbage seems here crowded into smaller compass, — the concentrated greenness of the swamp. How dear they must be to the chickadee and the rabbit!” ~ Thoreau’s Journal, October 31, 1857

I like ferns. I think they invite good vibes and happiness. You can’t stay in a bad mood when you look at a fern. So when a pair of beautiful specimens started growing in the shade of the north side of the house last year, I was pleased. They stayed green and leafy for the entire summer. And they grew. And they grew some more. By the time fall arrived, the ferns reached the windows. I could look out and admire them from my very own bathroom. I marveled at how tall they’d gotten. Sometimes I got the urge to cut one of them down, grab it by its thick woody stem, hold it high, and wave it back and forth as I paraded around the neighborhood. But that would have meant the sad end of it afterward, too. So I let the ferns alone. And what about their woody stems? I should have considered them an important clue. 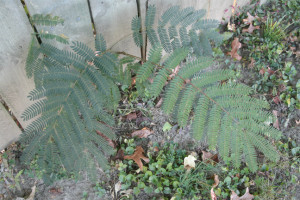 How the ferns began

My ferns lost their fronds in winter. They looked like twin palms standing naked in the snow. I noticed that a third and smaller one stood nearby, too. I worried about their survival. I shouldn’t have. Spring brought them all back again. This time, they had fewer fronds along the bottoms of their trunks and more at the tops. And they began to grow even taller.

When several people came by to help me with lawn clean-up, my first piece of advice was to let the big ferns alone. Don’t cut them down, I said. The workers looked puzzled. I knew they would understand as soon as they walked behind the house and saw the fronds. And they did. No ferns were harmed in the taming of the yard. And still they grew. 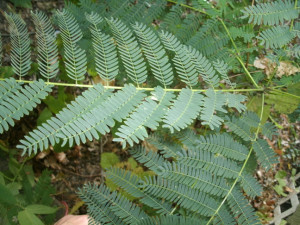 Scientists tell us that ferns were once the main and largest plants on the planet. Their growth, death, and decay contributed to the formation of coal deposits during the Carboniferous era. One source I found said that their fronds were “clustered at the top of a treelike trunk, sometimes 30 or 40 feet in height, rather than growing directly from the rootstalk.” Well, this described my backyard ferns exactly. And now I was finding smaller versions of them on other parts of the property. Was I growing Ur-Ferns here? Were these individuals part of a species left over from ancient times? If so, how and why had they parked themselves behind my house? Were they going to take over the place?

I found an answer of sorts one day during my early evening neighborhood walk. As I sauntered along the sidewalks, I kept my usual eye out for squirrels, rabbits, and birds. But I noticed some of the greenery, too. Four blocks away from my house, I saw something so powerful that I had to stop. A large tree I had walked past for months suddenly demanded my attention. I could barely believe my eyes. The “leaves” of this tree looked exactly like my beautiful ferns. I stared at them as my brain processed this new information. Evidently my big ferns weren’t ferns at all. They were young trees. They could even be related to this one. What a revelation! My saunter slowed to a thoughtful trudge as I turned around and made my way home. 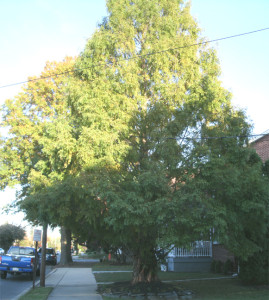 The Fern-tree down the street

“It is only when we forget all our learning that we begin to know. … If you would make acquaintance with the ferns you must forget your botany. You must get rid of what is commonly called knowledge of them.” ~ Thoreau’s Journal, October 4, 1859

I guess I forgot my botany, Henry. Ferns wouldn’t have woody stems. They wouldn’t grow as high as the house. I got out my guidebooks to identify them. It turns out my ferns may instead be mimosa trees. They’re all going to keep growing taller. Soon, I’ll have to pull out the smaller ones popping up behind the shed and along the fence. But the twins behind the bathroom window? I’m going to leave them there. I’m going to assign their fate to a future caretaker of this property. And I’m going to keep enjoying them while I’m here. 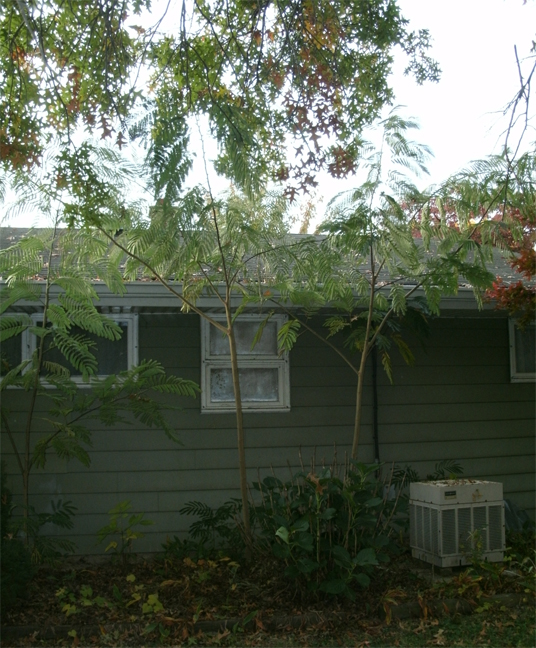 Comments Off on Ferns and More