The Art of Spying a Woodpecker

“How far the woodpecker’s tapping is heard! And no wonder, for he taps very hard as well as fast, to make a hole, and the dead, dry wood is very resounding withal. Now he taps on one part of the tree, and it yields one note; then on that side, a few inches distant, and it yields another key; propped on its tail the while.” ~ Thoreau’s journal, May 10, 1853

On the last day of 2014, I went for a winter walk with a friend. It was intensely cold in southern Vermont – too cold for us to walk the long path we preferred, even though no snow covered the ground. Instead, we sauntered briskly around his neighborhood and came back around to stand in front of his home.

He introduced me to one of his neighbors, and the three of us chatted out in the middle of the street. All the while I was distracted by the soft tapping of a woodpecker on a nearby tree. My companions didn’t seem to be bothered by it. They did hear and acknowledge the sound when I mentioned it to them. While they talked on, I scrutinized the tree that I believed the sound was coming from. It was taller than a three-story house, so there was plenty of bark-covered territory to inspect. Still, I didn’t see the bird. Where could it be? I had to know.

Locating a woodpecker is a study in both acoustics and movement. You must both listen and look. I turned away from the human talk to sidle closer to one side of the tree. I examined every inch of its edges, looking for any small silhouetted and bobbing outline. No bird. But the tapping never stopped. It sounded as though someone was constantly worrying a baseball into a worn catcher’s mitt, over and over and over again. Our conversation hadn’t stopped it. And my quiet stalking around the trunk didn’t slow it down, either.

I made it to the other side of the tree and did another surface scan, beginning at the bottom. Finally I caught movement connected with sound, very close to the top. The woodpecker was hanging onto a cross branch that reached high over us. Unlike Thoreau’s bird, this one was focused on just one section of just one limb. It was digging deep for insect food on this cold day. All I could see from ground level was its white and mottled tummy, and the motion of its head and beak attacking the wood. 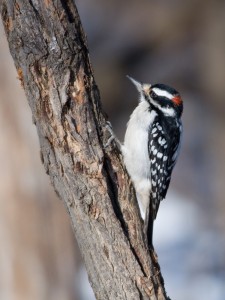 Male Hairy Woodpecker – these guys can be hard to spot.

Now I could point it out to my friend. “Can you see red, or any other identifying marks?” he asked, squinting into the sun.

I didn’t have my binoculars or bird books with me. “No. Just his white tummy, from this angle and distance. Although there are people who could tell you what the species is just by listening to the pattern of the taps.”

“Unfortunately, I am not one of them,” I admitted.

Another neighbor came out for a walk. When she saw that we were all looking up, she pulled her head back to do the same and asked, “What are we looking at?”

“A woodpecker,” I said. I raised my arm and described which branch he was on.

Sure, this woodpecker was easy enough to spot when someone else showed you exactly where he was drilling. I had done all of the work to “find” this guy. I was frustrated at how casual this discovery was for everyone else around me. If the air had been warmer, I would have watched this bird for the better part of an hour. By myself, no doubt.

Maybe woodpecker-watching isn’t just a lesson for the eyes and for the ears. Maybe this little bird is a teacher of humility, too.

Tagged as Unlike Thoreau

One Response to The Art of Spying a Woodpecker