“Each town should have a primitive forest where a stick should never be cut for fuel, a common possession forever, for instruction and recreation. All Walden Woods might have been preserved for our park forever, with Walden in its midst, and the Easterbrooks Country, an unoccupied area of some four square miles in the north of the town, might have been our huckleberry field. . . . Journal, 10/15, 1859. 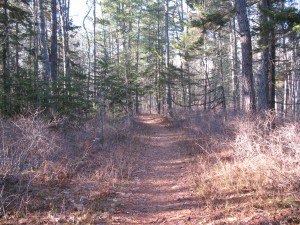 Five or so years ago, I took a walk into our town Commons, a two-hundred-acre stamp of wood- and wetland set aside for wanderings and recreation. Already, after a few years along these trails, I was growing attached to them and to the trees that always awaited me there. So the sound of saws snarling unsettled me; as I walked deeper into the woods, the saws grew louder. Near the heartland of the Commons lies a pitch pine barren, once a common finding in our area, now a rare one. The cutting was going on there, and, as I approached I heard the familiar crack followed by the gathering rush of toppling as a tree went down.

No little outrage quickened my pace. The saws of the world, even here? I said to myself. Even in the Commons?

Here is the moment to remind myself that it’s always good to get the full story before boarding the express to outrage. Here is compression of that story: the cutting in progress aimed at large white pines that had overshadowed their smaller pitch pine neighbors; the Commons were “in succession,” shifting into their next stage. But the pitch pines and their barren were now unusual, deemed worth preserving, and, with some thinning, they would thrive. Okay, I thought, let’s see. 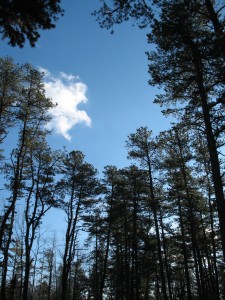 To ring in this new year and celebrate its possibility, I went for a walk in the Commons. The air was sharp, the sky open faced. And in the barrens heartland, the pitch pines rose from the general scrub like columns of gray smoke; then their thick needles poked the sky. The barrens had an expansive feel that infused me with hope for what’s ahead. Here and there, I could see the aging stump of a white pine, and from one I looked aloft, imagining the 80-foot tree that stood there and the way it would have obscured the sky. 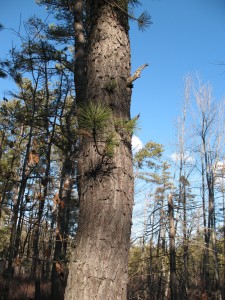 The selective cutters had done well, I thought. In one tiny grove, more than 50 pitch pines aimed at becoming full trees; each had been given a chance; a few would become the grove’s dominant trees. And the barrens, with its wide spacing of trees would provide walking reminder of what once was usual in our area.

Our Commons now has its uncommon barren and its common paths, where I and others have a place to wander throughout the coming year. What we hold in common is a place both rare and usual; it is where we often walk to find ourselves.