A Time for Squirrels

“I should like to see a man whose diet was berries and nuts alone. Yet I would not rob the squirrels, who, before any man, are the true owners.” ~ Henry David Thoreau, Journal November 7, 1853

I was sitting and typing in my writing porch on a recent breezy afternoon. The gusts were powerful enough to blow acorns right off the nearby oak tree. Bam! bah bah plop. Bam! bah bah plop. They slammed onto the porch roof, bounced twice, and landed outside my door, over and over. I put aside my work to go out, pick up a few acorns and look at them. They were squat and smooth and had fallen right out of their caps. The tree was still holding fast to those. 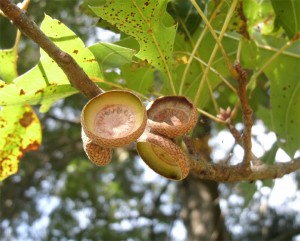 Where acorns fall, squirrels appear. Now our yard is full of bounding puffy gray tails and the squawky sounds of critters claiming certain stashes as their own. They’re everywhere, all of the time: running over our roof, running up and down the wooden fence, perching on the railing or on a branch to take a snack break. Squirrels R Us.

This routine frenzy of fall always reminds me of a passage from John K. Terres’ book, From Laurel Hill to Siler’s Bog: The Walking Adventures of a Naturalist (New York: Alfred A. Knopf, 1969, pp. 196-198). Terres wrote from North Carolina, where he had adopted as an indoor pet a young flying squirrel he named Hepsey. One evening he decided to test Hepsey’s nut-gathering prowess:

In an experiment, I put one hundred hickory nuts on my bureau at dusk one fall evening to see what she would do with them. By midnight, when I returned to my room, she had stored them all. Some were in her nest box, others were in the folds of the window drapes, some were in my shoes under the bed, and others in the pockets of my shirt and trousers that hung outside my closet door. Just as the wild flying squirrels of Laurel Hill have food storage places in holes in trees a short distance from the home nest, or in the forks of limbs and under fallen leaves of the forest floor, these had been Hepsey’s hiding places for her stores.

At midnight when I came to my room, Hepsey had disappeared. I did not look for her but counted another one hundred hickory nuts and spread them on my bureau. The next morning when I got up, every nut was gone. Hepsey had picked up and stored two hundred in one night.

One squirrel + one night = two hundred hidden hickory nuts. Terres did some calculations. He considered the amount of prime nut-harvesting time, from September through January, and how many of those nights would have decent collecting weather. By his account, each flying squirrel in his neighborhood had the potential to grab and hide from 10,000 to 12,000 nuts in a single season. Since he often found “uneaten flying squirrel caches,” Terres was “sure that they usually stored many more than they ate. Hepsey seldom ate more than one or two hickory nuts in a night.” Which explains where hickory trees come from.

When Henry David Thoreau was developing his tree succession theories, he did a squirrel calculation, too. He estimated that on a piece of land measuring ten rods square (1/16th of an acre), squirrels would have to plant only 10 acorns a year “in order that there might be one oak to every square rod at the end of ten years.” (October 17, 1860) Too bad Henry didn’t sneak a squirrel past the rest of the Thoreau household and keep it in his room the way John Terres did. 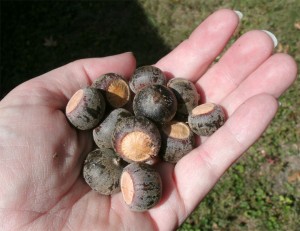 Terres learned something else from watching his companion closely. “After Hepsey had stored a hickory nut or acorn, she would not store that same nut again. Her sense of smell or taste was so keen that she distinguished at once a nut she had had in her mouth before and refused to carry it away.” Presumably, this ability also helped Hepsey identify which nuts were really hers, when it came time to find and eat them.

If our squirrels are each hiding 10,000 acorns this year, and eating only a small percentage of them, maybe this is good news for me. Maybe I won’t have to mow the backyard at all in a few years. It will have become an oak forest. Then I’ll hear some REAL acorn thunder when I’m writing in the porch.

2 responses to “Fall of Nuts”