That Hum and Buzz

Think of an insect three inches long that makes a sound so loud it keeps you awake at night. When we traveled to a beautiful spot on the Delaware Bay recently, that is what we encountered. Think of another insect, half that size, which has inspired poets and painters the world over. Many of us have this first creature in the trees near our homes, and this second small animal near our hearths, along the flowered edges of our homes and our gardens. Cicadas and crickets–the singers of the bug world.

The cicada makes the loudest sound of any insect on earth; not one louder insect sound has ever been recorded. A cicada can reach 120dBs, which is equivalent according to the experts to: a riveter, a wood chipper, thunder in a summer storm, a diesel engine room, and a Fourth of July fireworks display. That’s loud! The female cicada makes no sounds whatsoever, and of all of these loud males, the Australian cicada buzzes louder than any other cicada…bububuuuuuzzzzzzzzzz! An astonishing sound. 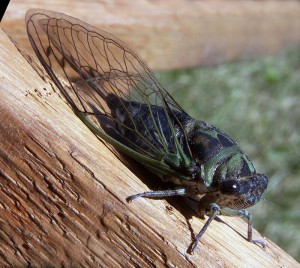 Here is what John Keats said about the warm sound of the crickets by his hearth: “from the stove there shrills / The Cricket’s song, in warmth increasing ever.” Keats wrote these lines in a beautiful poem entitled “The Poetry of Earth is Never Dead.”  So the poet, who is perhaps the greatest wordsmith of our language since Shakespeare, finds this tiny black bug to be a creature that can make a sound that warms us, even in the cold and dead days of winter.

The level 130dBs of sound is described by the experts as “deafening” and also as the “threshold of pain.” We all know what it is like to hear a sound so loud that our ears literally hurt. We have all turned up the stereo headphones too loud, or we have stood too close to dad when he was firing up the chainsaw right next to us, or we have been in the fifth row of a Led Zeppelin Concert in 1969–right in front of that bank of Fender amps–and, although we said we loved it, it really did hurt our ears. So imagine a little insect that can make a sound only 10dBs below this “threshold of pain” and then imagine dozens of these, or even hundreds of these, in the trees and shrubs around you on a late summer night. 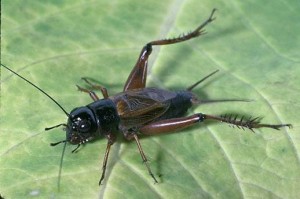 Of course, there are other insects that make memorable sounds: grasshoppers, bees and wasps and mosquitoes and midges all buzz, and some buzz loudly. But I say that crickets and cicadas carry the day. They have the voices that do not die and, as Keats said two centuries ago, they are still “increasing ever.” We hope so. Although climate change may expand the range and population density of certain species, it will also upset the balance of many insects and most of their sound-making fellow species. Like the poet, I want to hear my nearby cicadas and crickets for years to come.

One Response to That Hum and Buzz