The silent Memorial Walk around Walden Pond is a tradition during The Thoreau Society’s Annual Gathering. We meet at the house replica near the parking lot at 7 a.m. on Saturday morning. When we introduce ourselves, we also share the names of people we are dedicating the walk to. The whole group walks in memory of Henry David Thoreau and scholars Walter Harding and Bradley P. Dean. Individuals may choose also to walk for family members, friends, and mentors who have gone on before. I always dedicate my participation to two of my mentors, Thoreau scholar Edmund Schofield and singer-songwriter and environmentalist John Denver. I wear Ed’s tan corduroy hat during the walk, as he often did whenever he spent time exploring Walden Woods.

On this July 12th, about a dozen people stand in our circle. We sing a verse of Happy Birthday in Henry’s honor. Then, when the introductions come around to Jeff Hinich of Ontario, he stretches out his arms as if to embrace the group and says, “I dedicate this walk to all of Henry’s children!” We laugh. We know that Henry and his siblings never married and that no direct descendants of their family exist. And yet: isn’t Jeff right? Aren’t we all Henry’s children? Didn’t he father good books and essays and opinions that in turn brought together followers like us?

I think on this satisfying idea as we walk single file across the road and down to the level of the pond. We edge past a handful of long-distance swimmers preparing to work on their pond-laps. A few are already in the water. Now we turn left in order to round the pond clockwise. As the first one in the line, I often get to see a few things the others don’t. Chipmunks squeak and scurry in front of me, almost underfoot. Robins are in abundance today, too. I play a game of tag with one bird for more than ten yards. It bobs ahead of me, stops to let me catch up, then bobs ahead some more. Finally it realizes that I am not going to stray from the path that we’ve both been using. It flies up into a small tree and watches our group pass from this vantage point. I try not to laugh out loud.

Otherwise, it’s a pretty calm scene at Walden Pond. Some fishermen quietly cast lines from boats or from the shore. Even the train tracks lie idle. The MBTA continues to make improvements and repairs on this section and has suspended weekend service for most of the rest of 2014. So we wait for the train that doesn’t come, then continue on to the site where Henry’s house once stood. Here we fan out and take our time, thinking about Henry and our loved ones, too. Some take a few seconds to stand in his doorway and look down to the cove.

For most of the fourteen Memorial Walks that I’ve been on, I’ve seen white Indian pipes growing in select spots around the cairn and outside of the house markers. This time, there are none. I tiptoe to all of the places where I’ve seen them in the past, and no white shoots are beginning to lift the leaf litter. The weather conditions must have been different this year. Maybe the heat or moisture levels haven’t been right. Maybe the unique curved heads will pop up later in the season, when they can amaze other visitors. Or maybe they were quite early, and I missed them. I feel disappointment at their absence.

What I notice instead is all of the small pine trees rising here. Many aren’t even as big as the one Charlie Brown places a single red ornament on each Christmas. One is certainly less than four inches tall. Yes, I’ve seen seedlings before. But either there are more of them today, or I’m somehow extra aware of them now. Then it dawns on me. These little guys are Henry’s children, too! He once planted hundreds of white pines in this area. Granted, we have no easy way of proving that these specific saplings came from his specific plantings. But in the grand and symbolic scheme of the Walden Woods ecosystem, we can call them descendants. More of Henry’s children. And at this thought, I smile again. 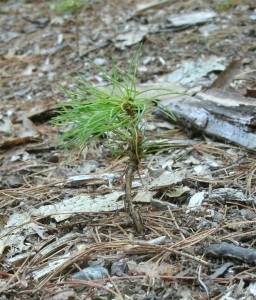 Faith in a Seedling

We saunter back to the parking lot. Now, families loaded down with beach paraphernalia hurry toward us, eager to stake out some sand and sun for the rest of the day. Some of them may be Henry’s children, too: if not now, then perhaps at some future moment. How many children does Henry David Thoreau have? It’s an innocent enough question that’s hard to answer. But on this particular morning, and only at Walden Pond, I count at least a dozen people and hundreds of seedling pines. Many more are sure to surface in the years to come.