It’s been nearly a year since I stepped out the door, turned left at the driveway’s end and walked off into these New Hampshire hills. But even as the town road bears right uphill and I go straight along this spur’s tire-flattened gravel, the images arrive: in them I (or we) are setting out, often with the Oregon Ridge in mind. It could be blueberries on the ledges; it could be relief from the heat; it could be hope of another moose antler; it could be solitude. Any of these pretexts will do.

Fifty years seems a long stretch, unless, as I have, you have been reading a book set in geological time; then, fifty years seems a mere intake of breath, a shallow one at that. I have a mind habituated to the ephemeral, the thought equivalent of a day moth, whose 24-hour life cycle seems hurried, but usual. But on this return to the ridges I first walked 55 years ago, I keep making a conscious effort to see the slowest motion of long time and its events. The tilted planes of rock remind of a time when they were not aslant. And the pluton of Cardigan itself, a resistant dome of weathered rock, reminds of all the companion rock and soil washed away over millennia to reveal this mountain.

On my way up the aptly named Skyland Ridge, I drop into a small drainage, where a clear brook burbles its little July song. The climb up the bank on the east side is reach-out-and-touch-the-ground-before-your-face sharp, and, as a I look back down some 50 nearly sheer feet to the brook, I take in the cutting it has done… is doing, even as I watch its little summer flow, taking down this mountain a few molecules at a time.

Usually the shift to this sort of deep time meditation is too great a leap, and I return soon to looking at leaves, musing about mosses and listening to birds sing their territories. The nearby drumming of a pileated woodpecker reminds of time’s more immediate beat, as do the fist-sized holes in a trailside tree. But on this day a recurring perception keeps nudging me back to longer spans of time, and, after a while, I realize that I am also looking at changes in the land over the 55 years. In particular, I keep seeing the slow crawl of trees as they recolonize and reclaim the bare rock.

Cardigan’s brother peak is named, arrestingly, Firescrew. As a boy, I simply noted that it topped out just above 3000 feet and hurried toward it summit, repeatedly. Later, I began to wonder about its odd name, and I found it derived from a massive forest fire in 1855; its heat was so intense that it burned with a swirl (or screw) of flame and smoke visible for many miles. Then the charred, sterile soil washed off both mountains, leaving them as domes of rock, with views worthy of their higher northern neighbors, the White Mountains. 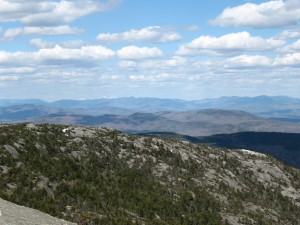 Firescrew’s Ridge and Its Returning Forest (note Mt. Washington in the Farground)

As a boy I reveled in the Cardigan’s exposed mountain feel; it played much bigger than its 3100 feet; so too did Firescrew. The absence of trees and brush created this feel; it was all elemental rock pressed up into the sky. Over these decades, soil and seeds have blown into creases in the stone, and generations of grasses have lived and died. Gradually enough soil has accumulated to host bushes, in spots the much-loved blueberry. And on: more growth, more decay, deeper or taller brush, with trees following. It takes only a little imaginative effort to see both peaks reforested some hundreds of years in the future.

And with this little effort and this day’s walking, the door to the room of deep time opens. In this room the rocks live and move; we are kindred, I think, as I sit here looking out.

Comments Off on Uplands of Time