Hawks were much on Henry’s mind during the April days of 1855. Often, he had taken to the water, and, as he rowed and floated, he saw fish hawks; being Henry, he wanted to know what these hawks were eating, and a number of entries have a catalogue of pout parts found beneath a hawk’s perch – another recorded arc in our round world’s cycles. And whenever he walked he scanned for them too: “Going up the hill, I examined the treetops for hawks.”

Throughout these days and lines wherever hawks appear so too does the loud, dark shadow of the crow. For days now I’ve had this avian pairing in mind as another chapter of its story plays out atop a tall hemlock next to the Sudbury River. 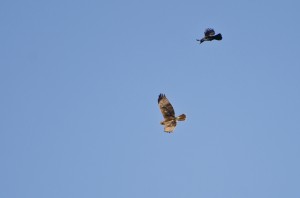 Most mornings this spring, the tall hemlock by the Sudbury River has been topped by his figure. Still from this distance, sentinel-like, this young redtail hawk takes in the floodplain, and were I a four-footed scurrier, I’d hope to be aware he’s there.

Morning after a strong front blew through: no time to be totem for the redtail today. He comes to his morning perch and lights, folds his wings; immediately he has to flare them for balance, then the red rudder of his tail fans out and tips him forward. He looks like a child on a teeter-totter, or an athlete rehabbing his bum ankle. For a full minute he wobbles; the whole world of his vision must rock. Then he opens his wings, flies off downwind, sinking to and skimming the field before pulling up into the gray branches of just-flowering, shorter maple.

And this morning under low clouds, I’m watching as the hawk pulls up flaring wings to his perch; above and fully engaged is a single crow, and the crow begins a series of inverted parabolas, diving on the hawk, whose feathers are truly ruffled – he still looks as if he slept in them. Then, for a minute or so, the crow lights in a nearby tree crown, and, through binoculars I can see him “talking” at the hawk, who turns to face him. “Yo, young fella,” he seems to say. “I’m comin’ right back; I’ll be on you all day like red on your tail.” The crow then lifts off and resumes his diving harassment, and, at each near approach, the hawk ducks his head a little and opens his beak…and I wonder if there’s a price for flying too close, or if this is another part of the world’s tutorial for this young hawk, who also seems to be in his first molt.

On this third morning the washed air after a rain makes the redtail shine, even as his primary color is dun. He is perched to the right and below his usual uppermost point, and perhaps that’s because his black nemesis is here too. Can this be the same crow? Did he sleep nearby, open his yellow eye and say, “Where’s my hawk?” stretch his wings and resume his inverted parabolas of outrage? Really? As I watch through glasses, the hawk tracks the swooping dives of the crow, opening his beak and flaring a wing and cringing (it must be said) at each approach; the crow drops into my magnified field of vision, accelerating to and by the hawk’s head, then rises away and out of sight. I time his appearances – every 7 or 8 seconds, he’s back; when a longer interval arrives, I put down the glasses and find him atop a nearby maple. Even without magnification, it’s clear he’s still talking at the hawk, even as he must be doing whatever the bird equivalent of panting is.

Then, after all this, the crow suddenly arrows away south; the hawk watches him go, wondering, I’m sure, when he’ll be back. I wonder too. For now, the hawk is again alone on top, totemic, imperturbable.

Spring is bird season in Henry’s journals – and here today. Their morning chorus chases off the cold winter silence, and everywhere they are constructing the coming season from beakfuls of grasses and twigs. Overseeing it all is a Sudbury River hawk.

This entry was posted in General, Henry David Thoreau, Nature, The Roost and tagged Sudbury River. Bookmark the permalink.

One response to “Hawk and Crow”