The Year of the Pigeon

In the 19th century, they flew in flocks so enormous that they filled the entire sky and seemed to go on forever. They were Passenger pigeons, Ectopistes migratorius. And Americans considered them to be just as endless a natural resource as the water and the trees and the rest of the terrific bounty found on this continent. This opinion prevailed until the last individual, a captive pigeon named Martha, died in the Cincinnati Zoo on September 1, 1914. With her death, a once prominent species went famously extinct.

Henry Thoreau was quite familiar with these birds. In June 1861, he and traveling companion Horace Mann Jr. examined several wild pigeon nests that they had found in basswood, oak, and hop hornbeam trees in the prairie land near Minneapolis. When the men later steamed by riverboat up the Minnesota River, they passed through a remnant of the Big Woods, the noted old-growth stand that once covered 2000 square miles. Here the trees on either side of the water were “all alive with pigeons & flying across our course,” Thoreau wrote. You can almost imagine the sight and the sound of a thousand beating wings. 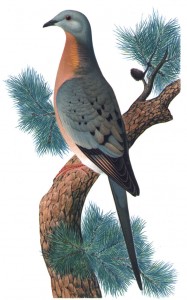 Back in Concord, Thoreau saw smaller flocks and individual Passenger pigeons in the wild. But several men he knew also built “pigeon-places” designed to attract large numbers of birds. They offered good nesting spots and plenty of food … until large nets were strung up and dropped to catch and to kill as many birds as possible. Entries in Thoreau’s journal describe these local outposts.

“Saw a pigeon-place on George Heywood’s cleared lot, — the six dead trees set up for the pigeons to alight on, and the brush house close by to conceal the man. I was rather startled to find such a thing going now in Concord. The pigeons on the trees looked like fabulous birds with their long tails and their pointed breasts. I could hardly believe they were alive and not some wooden birds used for decoys, they sat so still; and, even when they moved their necks, I thought it was the effect of art. As they were not catching then, I approached and scared away a dozen birds who were perched on the trees, and found that they were freshly baited there, though the net was carried away, perchance to some other bed. The smooth sandy bed was covered with buckwheat, wheat or rye, and acorns. Sometimes they use corn, shaved off the ear in its present state with a knife. There were left the sticks with which they fastened the nets. As I stood there, I heard a rushing sound and, looking up, saw a flock of thirty or forty pigeons dashing toward the trees, who suddenly whirled on seeing me and circled round and made a new dash toward the bed, as if they would fain alight if I had not been there, then steered off. I crawled into the bough house and lay awhile looking through the leaves, hoping to see them come again and feed, but they did not while I stayed. This net and bed belong to one Harrington of Weston, as I hear. Several men still take pigeons in Concord every year; by a method, methinks, extremely old and which I seem to have seen pictured in some old book of fables or symbols, and yet few in Concord know exactly how it is done. And yet it is all done for money and because the birds fetch a good price, just as the farmers raise corn and potatoes. I am always expecting that those engaged in such a pursuit will be somewhat less groveling and mercenary than the regular trader or farmer, but I fear that it is not so.” ~ Thoreau’s journal, September 12, 1851

“Brooks has let out some of his pigeons, which stay about the stands or perches to bait others. Wild ones nest in his woods quite often. He begins to catch them the middle of August.” ~ Thoreau’s journal, July 18, 1854

“They are catching pigeons nowadays. Coombs has a stand west of Nut Meadow, and he says that he has just shot fourteen hawks there, which were after the pigeons.” ~ Thoreau’s journal, September 14, 1859

While Henry Thoreau kept in contact with the owners and operators of these pigeon-beds, he was most interested in what the birds ate. He wrote down what kinds of seeds the men used as bait, and what evidence could later be found in the birds’ stomachs. “It is a wonder how pigeons can swallow acorns whole, but they do,” he noted, on September 13, 1859. They must have been truly remarkable creatures. And because Heywood, Harrington, Brooks and Coombs were not the only folks who kept pigeon-places, the pigeons are now gone.

In 2014, we can use the centenary of the last Passenger pigeon as a time for contemplation about sustainability. Certainly we now understand that species come and go, within the natural dynamics of our earthen environment. But Martha’s kind suffered a man-made extermination. How many other deliberate and preventable extinctions have happened in our lifetimes? How many more will we tolerate? How and when will we memorialize the future disappeared: the last Cave salamander, the last American emerald dragonfly, the last polar bear? Now is the perfect time to reflect and consider and act, and to learn from the mistakes of the past.

To learn more about “Project Passenger Pigeon: Lessons for a Sustainable Future,” visit http://passengerpigeon.org, or “Like” its page on Facebook.

2 responses to “The Year of the Pigeon”