In 1855 January was as variable as the one now winding down. Near its end, Henry Thoreau wrote, “What a Proteus is our weather,” and then went on to say, “Let me try to remember its freaks.” The list that follows tracks Thoreau’s close relations with all weathers, though I was heartened also to read this: “January 17. Forget.” Ah, even Henry Thoreau, he of the wide-bodied journal-memory, forgot things.

What also runs through Thoreau’s journal that month is his fondness for skating. At every opportunity, and they were many, Thoreau is out on the meadows and rivers on his skates; it seems his winter’s walking. So, it was unsurprising to reach Jan 31st and find Henry out early on that cold day, already attaching his blades to his feet and, after trying “my boatsail on the meadow in front of the house” setting out up the Sudbury. The boatsail got left behind because, though he could “go well enough before the wind,” he found “I could not easily tack.”

And so Thoreau set off, and as I followed his account of skating upriver, I thought, How different (as usual) from other skaters was Henry. That tossed me back to my own skating memories, mostly from childhood, and the way skating was often confined. Either it was rink-bound, or, even as we skated on our ponds and meadows, enclosed by land and/or conjured, snow-lined banks. And, enjoined still by our parents, we skated only on secure ice. So, we skated in circles and ellipses. Who among us skated upriver? Let alone followed its winding course for 12 miles? 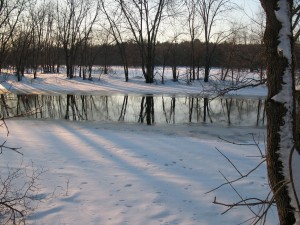 Henry’s Highway – albeit, not quite icy enough

What caught and kept me in this day long ago was Thoreau’s sense that he was adventure-skating – where the bridges and causeways crossed the river he found “on every shore there was either water or thin ice which would not bear.” Okay, we’ve all seen how melt traces such the footings and beams of such structures. Time then to turn back. Instead I read this: “I managed to get on some timbers of a bridge, the end of a projecting “tie” ?, and off the same way, thus straddling over the bridges and the gulf of open water about them on the edge of the thick ice, or else I swung myself on to the causeways by the willows, or crawled along a pole or rail, catching at a tree which stood in the water, — or got in.” Ah yes, “in.” That too.

For me this small story is irresistible, both for its persistence and for its absence of complaint – nothing about soggy clothing, cold hands, uncooperative ice. No woe, o no. The day ends, however, with this advice applicable today, I think:

You were often liable to be thrown when skating fast, by the shallow puddles on the ice formed in the middle of the day and not easy to be distinguished. These detained your feet while your unimpeded body fell forward.