“Of course it is the spirit in which you do a thing which makes it interesting, whether it is sweeping a room or pulling turnips.” Henry D. Thoreau, Journal, November 26, 1860

Last week with this positive attitude in mind, I headed outside and grabbed the rake. The community pick-up trucks were due on Monday, and I had many hours’ worth of work ahead to gather up all of our leaves and deposit them on the front curb.

Our big back yard is home to four large trees: a red oak, a sweet gum, a white pine, and an indeterminate deciduous tree whose leaves turn black and curly. Two houses west, a tall maple litters the landscape with progeny that comes our way with every wisp of the wind. Get the picture? I had raked and gathered just two weeks earlier, but now I found myself wading through another thick layer of leaves. They were back. Let the games begin.

Could leaf-raking be undertaken as a transcendental activity? I thought so. I dismissed the use of the landlord’s gas-powered leaf blower, which was stored in a nearby shed. Such devices are an affront to the eyes, ears, and nose, in my opinion. And too many of my neighbors relied on them. I wanted to be deliberate, be outside, be quiet, and become one with this small part of the world. For just a little while.

It was a bright but brisk and windy November day. I soon had to go back inside to get my winter gloves and scarf, though I was dismayed when I could not find the matching woolen hat. My ears would have to suffer. The wind also gave the leaves their last chances to dance and to fly. I often found myself herding a flock instead of leading a charge.

Eventually my brain ceased to dally with its daily cares and instead focused on sounds. We’re never far away from the mechanics of civilization. With my full attention drawn downward, I could still hear a small plane flying overhead, regular traffic on a nearby highway, an occasional siren from a passing ambulance, and the pointed stops of buses that carry our suburbanites to the nearest city. At least these buses are now powered by natural gas and not by diesel fuel.

In the midst of it all, the act of raking itself created a satisfying sound. It was soothing to listen to the flat wooden fingers as they stroked the leaves, the grass, and the ground. By comparison, the same action turned suddenly harsh when the rake moved across the wooden deck and the asphalt driveway. Over them all, I kept an even pace. Rake, rake, rake. Drop batches onto a plastic tarp. Drag the tarp to the front sidewalk. Slide the leaves onto the sidewalk. Over and over, again and again. Even thrice-weekly workouts at a gym didn’t exercise the kinds of muscles I was using now. I would be sore for days. But it was a good, healthy feeling.

A few lines of noisy Canada geese steered across the sky above me. I stopped to watch as one group turned itself around and headed back to where it had started. Silly geese. Then little birds came to inspect the territory I had just uncovered. Juncos and tufted titmice looked for tiny unearthed goodies. We shared the yard for the rest of the afternoon.

When I was finished, hours later, ours was indeed the largest and tallest leaf pile on the block, and I was darned proud of it. When I admired it from our front picture window, I was reminded of another familiar Thoreau passage:

“Every man looks at his wood-pile with a kind of affection. I love to have mine before my window, and the more chips the better to remind me of my pleasing work.” From“House-Warming” in “Walden” 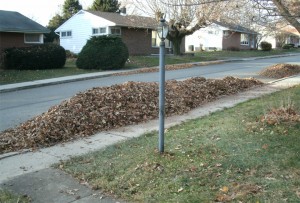 And so this woman could look at her leaf-pile with a kind of affection too, knowing that its bits and pieces would soon be transformed into mulch. Someday it would all help something else to grow, somewhere else.