We section off time to mimic the sun’s rolling passage, and we shape our round days to resemble each other in the way close cousins sometimes do. Slowly, it often seems, imperceptibly, we roll along until we reach a marker that signals difference. We step step again, and suddenly, we are in new land- or timescape. 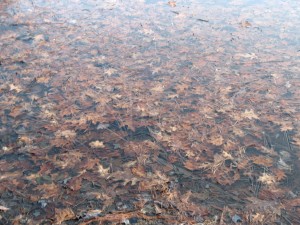 So it is for me when the month of light, November, ends and the month of late afternoon, December, begins. A December day feels always on the verge of darkness to me, and to counter that feeling, I begin to brew afternoon tea, and I look for a long book.

I experienced a similar feeling recently, when I left the light-filled pages of Walden after an Nth reading.

On a Monday early, we went to Walden Pond as punctuation for our readings of Walden. On Friday, we had closed the book. “The End,” Henry writes (and a student pointed out). I’d never paid attention to those two words, though, given the long drafting of Walden, I should have. There they are, set apart as if to say, “okay, no more comfort of linear travel along these lines of print. Out with you; get out of the little rectangle of my house, out of your house too, out under the light of the morning star.”

“O,” we say, disconcerted by the simultaneity of it all, “let’s begin again; let’s reread; we’ll even study!”

And so, there, beyond The End, we were. We had special permission from the state park to arrive and park and visit the house site before official opening. I had secured that permission after a test walk on the trails that approach Walden from the west had convinced me that the sneaking that appealed to me took more time than we had.

Sanctioned, official, upright, we crossed Route 126 and descended to the pond, bearing right then along the northern edge. The water level was the lowest I can recall, opening a fringe of sand that nearly circled the pond. Tendrils of fog rose from the water like gray snakes. It was, as always, perfect. We walked in silence and in file.

Then, the “morning star” rose over the ridge to the south of Pine Hill. The train shot through.

Time reassembled itself. We boarded for December.

One response to “On to December”