In recent years, Dr. Richard B. Primack and his Boston University associates have used Henry Thoreau’s meticulous botanical notes to track global warming. Henry recorded the days when various flowers bloomed annually in Concord in the 1850s. The BU folks compared his dates to current data and proved that plants were now flowering earlier. Finally, Mr. Thoreau gained the scientific reputation that he deserved all along.

But I have learned that you don’t have to be an academic researcher in order to figure out the difference that a century and a half makes. All you have to do is watch the crab apple trees.

When Thoreau traveled to Minnesota in 1861, he and traveling companion Horace Mann Jr. “botanized” from the train windows. They crossed southern Michigan via the Michigan Central Railroad on May 21, and began to glimpse trees with pink and white blossoms in the distance. What were they? The Massachusetts men weren’t sure. They were given no chances to jump out at any station stops and examine the branches closely.

After spending an extra day in Chicago, the duo crossed northern Illinois on May 23. Again, they saw the mysterious trees in bloom as they rattled through farmland and prairie land. And once again, they never stopped close enough to one to scrutinize it or to grab a sample.

Our northern Spring explodes with pink and white hues: cherry trees, Japanese cherries, apple trees, dogwoods, red buds, crab apples. Each one adds beauty to a landscape that is just beginning to otherwise grow green. The brilliant blossoms can create the most remarkable scenes, especially when the warmer days come on the heels of a cold and colorless Winter. We almost don’t remember that such colors exist, until Spring revives them. Today, it can feel as if we’ve suddenly gone from the set of a 1950s black and white movie to a 21st-century high definition thriller. And sometimes, the transformation can occur overnight. 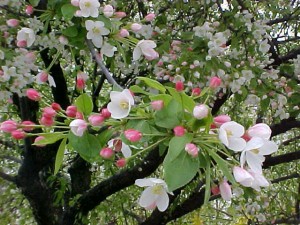 Henry Thoreau knew about these other trees, but not about the crab apple, Malas coronaria. It was not a New England native. He’d never seen one before. He had read about them, and he had even considered buying one from a Pennsylvania nursery and planting it in his yard in Concord. Now he suspected that this Midwestern specimen was the crab apple that had to date eluded him. He considered it a “half-fabulous tree” and was dismayed that he had been “launched on the bosom of the Mississippi without having touched one.” He may have mourned this lost opportunity.

Thoreau and Mann spent about a month in Minnesota. It wasn’t until June 11th that Henry returned to the idea of tracking down a crab apple. He finally found one that had been planted by a nurseryman who had relocated from Virginia and had brought some southern species with him. Thoreau clipped a sample for his herbarium. But of course, by then the flowers were long gone. He never did get a chance to examine the beautiful blossoms.

The bottom line is that Thoreau saw crab apples in bloom in the Midwest on May 21 and 23, 1861. When did your crab apple blossoms appear this year?

Where I live in southeastern Pennsylvania, the crabs came out during the third week of April. I suspect that they’re still blooming in Massachusetts and other points north as I pen this post. Even taking regional differences into account, our crab apples emerge well before the ones Thoreau saw, back then. Yes, our season begins earlier than his. But wouldn’t Thoreau be pleased to know that, thanks to contemporary landscaping techniques, crab apples now grow in many yards in Concord? Today he wouldn’t have to go far to see one.

One response to “Eyeing Crab Apples”