Posted on September 17, 2012 by Sandy Stott | Comments Off on Stone Advice to Pilgrims

Out-of-towners aren’t always familiar with the protocols of visiting Concord, Massachusetts. Some forget to pack essential elements from home. So let this be an appeal to those Transcendental Pilgrims who plan to make their first-time journeys in the future. Be sure to bring something to leave as a tribute to Henry David Thoreau at Sleepy Hollow Cemetery, at Walden Pond, or at both sites. Don’t be caught embarrassingly empty-handed.

Throughout the calendar year, people leave mementos at Thoreau’s gravesite in Sleepy Hollow. The stone carved with the simple name HENRY is often surrounded by pine cones, pine-needle sprigs, acorns, pebbles, rocks, pencils, pennies, and hand-written notes. Unprepared pilgrims sometimes pick up random natural gifts along the cemetery pathways, courtesy of the tall trees that give the place its park-like atmosphere.

In early May and in mid-July, corresponding to the dates of Thoreau’s death and birth, the piles at his marker grow taller. Thoreau’s neighbors on Author’s Ridge – the Hawthornes, Alcotts and Emersons – often attract similar but smaller heaps of tribute. Henry and Louisa May Alcott draw the most items. Not that anyone is counting, of course.

A different kind of tribute sprawls a few miles south, at Walden Pond. At the site of Thoreau’s house stands a cairn that was begun by Mary Newbury Adams on a summer day in 1872. Mrs. Adams was visiting from Dubuque, Iowa, and was walking around the pond with friend Bronson Alcott. When Alcott showed her the by-then empty plot where Thoreau’s house once stood, Mary was moved to memorialize the landmark in the Gaelic tradition. In Alcott’s words: “Mrs. Adams suggests that visitors to Walden shall bring a small stone for Thoreau’s monument and begins the pile by laying stones on the site of his hermitage, which I point out to her.” The cairn has varied in height and girth ever since. The exception came in the late 1970s, when state workers first hauled the heap away as a presumed eyesore and a safety hazard, and then supposedly brought the same rocks back three years later. (In theory.) Today, visitors still bring stones from home – sometimes inscribed — and other individuals take some of them away.

But a nearby and more deliberate rock connects Walden with the Thoreau Farm Birthplace. When granite posts were installed to outline the pond house site in the late 1940s, an additional large stone was placed where the chimney had risen. Its carved letters include a line from the Thoreau poem “Smoke,” which was published in 1843 in The Dial and later in the pages of Walden:

Beneath these Stones
lies the Chimney Foundation
of Thoreau’s Cabin 1845-1847
“Go thou my incense upward
From this hearth.” 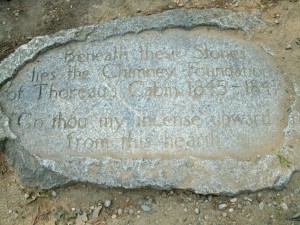 This rock came from the original Thoreau birthplace property, courtesy of owner and local historian Ruth Wheeler. According to Roland Wells Robbins, the farm’s pastures were “littered with granite boulders of all sizes and shapes. After inspecting many, we decided on a flat surfaced boulder about three feet long and two feet wide. It weighed about twelve hundred pounds and would insure protection for the chimney foundation.” Somehow, it was hauled over to Walden Pond. Now embedded in the earth at the far end of the house site, this piece of glacial litter is a quiet link between the land Henry David Thoreau was born on, and the two-year home that served to establish his literary and cultural reputation.

So: We’ve already left our rock at Walden. Have you?