Look to the Skies

As a weekend docent at the Thoreau Farm Birthplace, I do a fair amount of chatting about our friend Henry. Because our tours begin in the front yard, one of the first questions a guest is apt to ask is: “What would he think of that?” A nod or a finger pointing to the sky will accompany the raised eyebrows.

You see, the east-west runway of nearby Hanscom Field lies just beyond the property’s tree line. On most days, this lane is used for regular airplane take-offs. When the wind shifts slightly, it’s used instead for landings. The airport serves mostly small craft, but they all look rather large to us because they’re so close. Large and loud. The intrusion is only temporary, though, until the plane either soars away or touches down. Even on the airstrip’s busiest days, at least a few minutes of peace will pass before the next silver-clad “bird” shows up.

I quickly recite the text of Thoreau’s journal entry of January 3, 1861: “Thank God, man cannot as yet fly, and lay waste the sky as well as the earth! We are safe on that side for the present.” This quotation usually gets a giggle from the group. I also remind folks that the proximity of the runway to this house is similar to that of the railroad tracks and the site of Thoreau’s home at Walden Pond. Visitors understand this analogy, especially if they’ve just come from the pond and from hiking around its perimeter. If they happened to be at the state reservation at the “right” time, they got to see the gray and purple cars of an MBTA commuter train clatter along the tracks at the western edge of the water. Whether we consider the trains cutting through Walden Woods, or the planes flying over the farmland of Thoreau’s roots, both illustrate a relationship between people and nature, both are examples of industrialization’s imprint on nature. 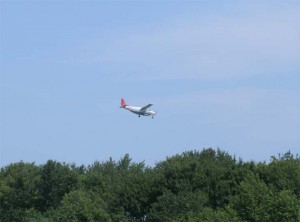 Plane above the Thoreau Farm Treeline

On occasion, another question may arise: would Henry Thoreau have gone up in a plane, if he had been given the chance? Well, speculation across the centuries can be a tricky task. But let’s start with the “Sounds” chapter of Walden to find Thoreau’s reaction to the introduction of the railroad to Concord. At first, he calls the soot-spewing locomotive a “fire-steed” that makes “the hills echo with his snort like thunder, shaking the earth with his feet, and breathing fire and smoke from his nostrils.” But he grows to admire the way the trains improved both daily time-keeping and transportation. Thoreau traveled by rail frequently: to go to Boston and Worcester, to travel to lecture sites throughout New England, and even to reach his favorite mountains – Wachusett in Worcester County and Monadnock in New Hampshire. He did not discount all new inventions.

So, based on his acceptance of the railroad, I believe Henry Thoreau would have tried flight at least once, if only to see his hometown from yet another perspective. Who knows? Maybe he would have had to alter another one of his famous sayings: “The universe is wider than our views of it.”

On the other hand, if you look up that flying reference in Thoreau’s journal, you’ll see from his follow-up remarks that he appears to be addressing the issue of pollution, and not of mere travel. Ah. That would be a lesson for another day.

3 responses to “Look to the Skies”