Posted on August 14, 2012 by Sandy Stott | Comments Off on Roost Interview with Christine Woodside – Editor of Appalachia 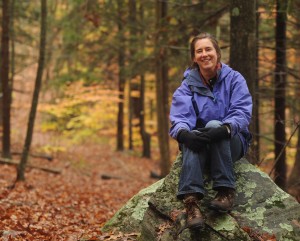 Christine Woodside is a writer and editor who lives in Deep River, Connecticut. She has written many articles for The New York Times, the Yale Forum on Climate Change and the Media, as well as relatively unknown magazines like New England Watershed and Connecticut Explored. Chris wrote a book about alternative energy (Energy Independence, Lyons Press) and is writing a book about Laura Ingalls Wilder and how the Great Depression helped form the pioneer myth. Chris was a newspaper editor and writer for 18 years.
Chris serves on the advisory board of the Metcalf Institute for Marine and Environmental Reporting at the University of Rhode Island, where she was a fellow in 1999. She hiked the entire Appalachian Trail with her husband Nat Eddy and two friends some years back. She and her husband have two grown daughters. Learn more about her New Jersey ancestors and early years at her Web site, http://www.chriswoodside.com.

Chris edits Appalachia journal (published twice each year – see http://www.outdoors.org/publications/appalachia/) and the quarterly, Connecticut Woodlands (http://www.ctwoodlands.org/ctwoodlands). Appalachia is the journal of the Appalachian Mountain Club and its oldest publication.

The summer-fall issue is published in June; the winter-spring issue comes out in December. Appalachia offers essays, journalism, poetry, and reports of mountain accidents (in the White Mountains of New Hampshire) and exploits (in the high elevation peaks around the world). The Journal also reviews books on wilderness-related topics and publishes poetry by some of today’s leading poets.
Chris has decided to devote much of Appalachia’s December 2012 issue to an exploration of Thoreau’s ongoing influence. In the following interview she reflects on some of what she found as she composed the issue. 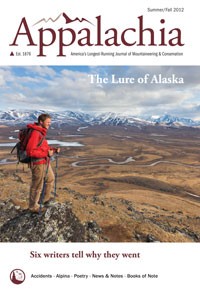 • You’ve decided to devote a sizeable part of the upcoming issue of Appalachia to Thoreau and his legacy. What drew you to take such an in-depth look at him?

I wanted to play up the difference between modern sensibilities and Thoreau’s, laying bare how strange it feels for a modern person to think and act like Thoreau.

• Now that you’ve reached the final stages of preparing the issue, what shape has the Thoreau section taken?

Three of our Concord-based members of the Appalachia Committee have written about Thoreau’s legacy in his hometown. Lucille Stott has written the anchor piece of journalism about Thoreau’s life in Concord, the restoration of his birthplace as Thoreau Farm, and the throngs of readers and scholars who read his papers at the library. Parkman Howe has written about the house where Thoreau died and some townspeople’s perception of him as a ghostly figure. Sandy Stott has written about teaching high school students to meet Thoreau as a writer speaking directly to them, rather than as a famous literary figure. Kristen Laine has chronicled her attempt to ramble through the woods and fields of her home property like Thoreau. The issue also includes an essay by Heather Stephenson about circumnavigating Walden Pond with her young daughter, flower ID book in hand, and a short piece about Thoreau’s botanical (mostly) observations on New Hampshire’s Mount Monadnock by University of New Hampshire professor Peter J. Thompson.

• As you gathered response and commitment from various writers, how did your plans for the issue change? In other words, what major themes have emerged?

I thought the issue would highlight how difficult it is to live and think as Thoreau did, now that it’s 2012. I was wrong. I have realized that modern people who read and consider Thoreau are not trying him on in a shallow way; many writers respect him deeply and understand his attitudes.

• How has working with the issue’s various writers and their articles changed your sense of Thoreau and his ongoing effect?

My original assignment to Kristen Laine was: go camping, Thoreau style. Don’t move around too much. Sit and contemplate a set of wild flowers, that sort of thing. But Kristen wanted to stay close to home and ramble daily over the same terrain, noting what was growing and what wasn’t, as Thoreau did in his later years. She proves in her piece that…. well, I’ll let you read it.

• What surprised you as you worked on this issue?

That I no longer feel Thoreau was eccentric in any way.

• Thoreau famously went to Walden to observe and think and write, but many point to his daily walks as the key contemplative practice that informed his writing. Where do you go to find your questions and begin to forge answers to them?

I started walking in the woods as a way to write more honestly about 15 years ago, after my father died. I already knew at that point that getting onto a forest path, alone, helped me sort out what I thought. But I was still in the mode of putting off the time in my life when I would act on those thoughts.
The day my father died, he told me about a conversation he’d had with someone at work, who had asked him if he had ever written stories. “No, but my daughter is trying to,” he said to her.
At that point I was waiting for the rest of my life—for the calling (this was 17 years ago) to write something other than newspaper articles—to happen to me. My father held up a Newsweek magazine cover about people who were fried by work. He raised his eyebrows.
That night, he died, and in the days after, I felt this tremendous push, something to do with him and my interpretation of him, to start writing stories. I knew I was a writer, but I was not writing from my own ideas.

Some years before all this, I had met myself in the mountains. My husband and I and two friends had quit our jobs and sublet our apartments to hike from Georgia to Maine for four and a half months. I was 28. This was the first time I had ever broken from society’s expectations, and, tame as it was, it liberated me to be homeless for that period.
I needed to do that then, and I still need to walk every day now, because I am one of those people who tends toward trying to please the world. I smile at people who are rude. I blush at pushy clerks. Walking alone takes me to who I really am and makes it possible to write originally. If the prose isn’t supposed to smile, it doesn’t. But I have to trudge through the woods first.

• The theme of Thoreau Farm is “Living Deliberately,” and visitors to the house often leave notes about what those words mean to them. Has this issue of Appalachia given you any new insights about what it means to live deliberately today?

I do think the issue will remind readers that we must try ever harder to live simply and deliberately in this age of distraction. We must take command of computers and the Web, remembering they are tools only. We must resist the urge to research how everybody else does something—whether it be gathering firewood, building a shanty, writing a poem, or making spaghetti—before we attempt it ourselves. We must stop buying things to solve problems that aren’t material.

• In the long run, Thoreau placed his hope for the future and faith in a seed. Where do you find hope as you survey and write about the challenges we face?

I find hope in birds that return year after year to their nesting grounds and do the same things, bravely, minute after minute. They never give up.

• What do have you in mind for future issues of Appalachia?

Well, I’m thinking about an issue with a few articles about women’s difficulties (and the solace they find) in the mountains. I want to continue my mission of nurturing new writers alongside the accomplished writers I recruit to the pages. I’d like to gather narratives of water journeys and maybe devote an issue exploring the similarities between rainforests and New England/British Columbia forests.