“For my part, I could easily do without the post-office. I think that there are very few important communications made through it. To speak critically, I never received more than one or two letters in my life — I wrote this some years ago — that were worth the postage.” ~ Henry Thoreau, “Where I Lived, and What I Lived For,” Walden

Just before Thanksgiving, the United States Postal Service unveiled the slate of new Forever stamps that will be released in 2017. Thoreau fans were delighted to discover that the post office had remembered to honor Henry’s upcoming 200th birthday. Sometime next year, we’ll be able to put his face on our envelopes once again.

This view of Henry was created by accomplished illustrator and artist Sam Weber. Weber was born in Alaska and grew up in rural Ontario. He holds an MFA from the School of Visual Arts and now works in New York City. Among his many past projects are cover illustrations for the books Mr. Mercedes by Stephen King and Norse Mythology by Neil Gaiman, as well as several covers of National Geographic issues. How did he come to land the chance to create a new look for Henry Thoreau?

“That’s a good question, although to be honest, I’m not entirely sure how this opportunity came my way,” he admits. Weber suspects he was already on the USPS radar because of his previous work for the office: the painting for a special 93-cent stamp of American author Flannery O’Connor, released in June 2015. He got the Thoreau assignment sometime afterward. 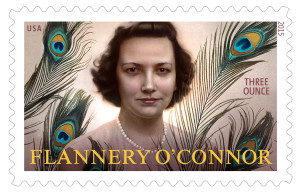 When Weber looked for a photographic reference of Henry Thoreau, he decided to use the popular 1856 Maxham daguerreotype as a guide. He finished the painting this past spring.

Those of us of a certain age remember the last time Henry Thoreau was so honored. It was back in 1967, when he turned 150. The artwork was created by American multi-genre artist Leonard Baskin, who drew it in one of his familiar styles. A lot of Thoreauvians didn’t think the image did Henry any favors. Sam Weber disagrees. “I love the Leonard Baskin stamp,” he says. “It has so much personality and character. Baskin’s visual sensibilities are quite different from mine, but I am a big admirer of his work.” 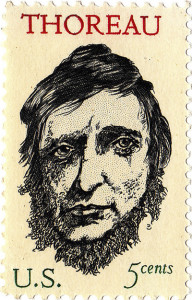 Weber had not been too familiar with Thoreau and his writings before he began work on this project. But he learned more about both as he went along. “I’ve come to truly admire his thoughts on the environment and on civil disobedience,” he says. Like this piece, many of the others in Weber’s portfolio are portraits. “Portraits have always interested me. I love that feeling of locking eyes with someone from the past through an image, painted or otherwise. In this way especially, I think this project resonated with my artistic voice.”

He continues, realizing how much Henry Thoreau means to a great number of people: “Historical portraits are always difficult, as my artistic abilities inevitably fall short in capturing the special quality individuals like this have on our hearts. I’m grateful for this unique opportunity, and I hope that I’ve done the man some justice.”

So far, we’ve heard only positive reactions to the new stamp. We can’t wait until we can see it and use it ourselves. USPS officials tell us that they have yet to solidify the date and location of the first-day-of-issue stamp dedication ceremony. Stay tuned for more details on this front, as we receive them. In the meantime: many thanks go out to them and to Sam Weber. This one will make letters truly worth the postage.

At Thoreau Farm on Wednesday, November 2, 2016, Dr. Lawrence Buell will speak on the topic of his latest book, The Dream of the Great American Novel, and Why It Continues to Thrive. He appears as part of the annual Concord Festival of Authors. The talk will begin at 7:30 p.m. All are welcome to attend.

Dr. Buell is the Powell M. Cabot Professor of American Literature Emeritus at Harvard University. He taught at Harvard from 1990-2011, and has earned many awards and honors along the way. He has also written and edited a number of books, including New England Literary Culture: From Revolution through Renaissance; The Environmental Imagination: Thoreau, Nature Writing, and the Formation of American Culture; and a biography of Ralph Waldo Emerson. In The Dream of the Great American Novel, Buell identifies four templates or scripts by which the literary genre can be considered. Such key books as The Scarlet Letter, The Great Gatsby, Uncle Tom’s Cabin, and Moby Dick turn out to be touchstone and model writings that have inspired others to follow. Buell’s presentation will no doubt be of interest to those of us who are avid readers or writers, or both. 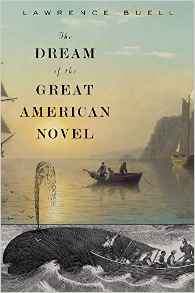 We know Professor Buell as Larry. He has long been a Thoreau Farm supporter, and he serves on our Board of Trustees. His admiration of Henry David Thoreau dates back to his days of growing up in the area just west of the city of Philadelphia, Pennsylvania. Larry first came to Thoreau’s writings in his senior year of high school. He could relate to the Transcendentalist immediately. “He appealed to me with his cantankerousness and rustic tastes,” Larry says. “I grew up in a then-country locale that, like Thoreau’s Concord, underwent suburbanization.” He has carried a fondness for Thoreau ever since. And he has both taught and written about the man for decades. 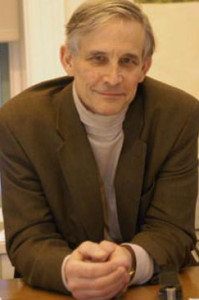 While Larry has many favorite Thoreau quotes, he fires off two of them quickly: “Beware of all enterprises that require new clothes,” from Walden; and “It is so hard to forget what it is worse than useless to remember,” from “Life without Principle.”

Like us, Larry believes that Thoreau’s life and work are relevant to our own lives today. He says, “In our increasingly urbanizing, regimented, crowded, and commodity-saturated world, Thoreau’s pastoral pushback, critique of business-as-usual work ethic, insistence on breathing space, and think-small voluntary simplicity will never go out of fashion.  These ideas also allowed Thoreau to be a political conscience without the fear of reprisal that might inhibit those of us with more complicated entanglements.”

Few will forget that last year at this time New York told us that Henry Thoreau was really a cheerless curmudgeon and hypocritical scold with the heart of Ted Kaczynski and the writing ability of Bronson Alcott. Many were astonished that the Thoreau Society had somehow missed this for this 75 years.

Now from New York comes another October surprise, this one from the Times, not the New Yorker. Also overlooked by Thoreau and Concord partisans, it recently announced, is the fact that the pencil capital of 19th- century America was–drum roll, please –New York City! Who (beside Kathryn Schulz) woulda thunk it?

I will not play fast and loose with the facts (unlike some writers), so I will corroborate. On Tuesday, October 11, 2016, a metro column in The New York Times began:

New York Today: Our Past in Pencils
BY ALEXANDRA S. LEVINE

“With school back in full swing (except for all the days off recently), let’s sharpen our knowledge of New York history.

Today’s lesson: How our city was once the capital of pencil manufacturing in the United States.

It further stated that New York in 1861 had, and I quote, “one of the country’s first lead-pencil factories.”

Now, are we who are in the know going to savage the author of this ridiculous claim with vicious personal attacks? Of course not. Concord people are decent and forgiving. Ms. Levine is probably a sincere and lovely person in addition to being a criminally inept reporter.

As everyone else knows, Concord had sophisticated and productive pencil factories while raw sewage still flowed on New York streets and no one dared venture into the raving wilderness above Wall Street.

Here, Ms. Levine, not to put too fine a point on it, are the facts:

The first wood pencils in the New World were made in Concord in 1812 when William Munroe invented a machine to cut and groove wood slats and filled them with a graphite paste. Fifty-nine (59) years later, in 1861, Eberhard Faber built what the Times calls the first “large-scale” pencil-making factory, in New York. Munroe’s shop was primitive by comparison. However he produced 175,000 pencils in 1814, only two years after starting, and five million pencils in 1835 alone. Sounds large-scale to me.

Munroe was soon joined by a cluster of prominent pencil makers in Concord and surrounding towns, including Ebenezer Wood (Acton), Joseph Dixon (Salem), Benjamin Ball (Harvard) and, most famously, in 1821, the father of the humorless misanthrope, and then the insufferable sourpuss himself. It was partly because of Henry Thoreau’s involvement that Concord led the pencil industry in the United States into the 1840s. At that time, Thoreau pencils were among the most sought after in the country. 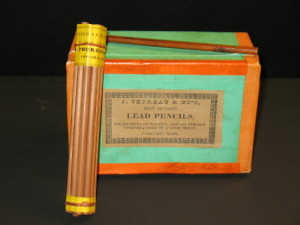 Concord pencils apparently were even admired in New York. In a family history, Munroe’s son wrote that some of his father’s less principled competitors illegally slapped Munroe labels on their stock. “One merchant in New York”—that putative pinnacle of all things pencil—“sold German-made pencils with ‘W. Munroe’ on them as illegal knock-offs.” No names mentioned, but just noting that Eberhard was from Bavaria.

The question then is: What makes one pencil-producing city the pencil capital of a nation? The quantity of cheap pencils turned out? Probably not. Would not innovation and quality be better criteria?

Concord pencil makers early on mixed graphite with wax, spermaceti and other substances. All worked but had drawbacks. The French were the only ones who knew the right recipe. Nicolas-Jacques Conté invented the modern pencil lead in 1795 by mixing graphite with clay—but he kept the formula a strict secret. Henry Thoreau decided to find the perfect graphite mix on his own. After researching it at the Harvard Library in 1840, he hit upon the idea of using clay—rediscovering what the Frenchman had figured out 45 years earlier. The result was a pencil lead that was harder and darker than any his family had made.

Thoreau also designed a machine to grind graphite better and another one to drill a hole lengthwise through the wood slats so the lead could be slid inside. The only reason the Thoreau family got out of the business was that the right recipe soon became common knowledge, resulting in stiff competition. The Thoreau’s wisely abandoned the pencil business in 1853 for a more profitable one: selling powdered graphite (“plumbago”) for use in electrotyping.

Having now settled this matter, to be fair I should point out that when I gently informed Ms. Levine by email of her error, she was the soul of grace. She apologized and promised a correction. I thanked her and said having at least one of these October misrepresentations corrected would set many local minds at ease. Her reply was not encouraging. She was off to her next story. New York workers, she said, have found the exact spot where the original Concord grape grew in Central Park.

Writer and editor Richard Higgins lives in Concord. University of California Press will publish his Thoreau and the Language of Trees in March 2017. He may be reached at rihiggins@comcast.net.