“I think that it is not too soon for honest men and women to rebel and revolutionize.” – Civil Disobedience

I never know where I’m going to be in my life when Henry’s words speak to me.

I was lucky enough to grow up near Walden Pond, close enough to think of it as a swimming hole primarily. The general aura of Concord as an historic and literary capital was something murmuring in the background. I just wanted to jump into the water on a hot day.

Henry’s words have always existed around me, I keep a beat-up copy of Walden in my beach bag and read a line or two, sitting in the sun in between swims. I’m still convinced it’s the best multimedia book of the 19th century, a meta-commentary of time travel and (at times comic) instruction manual for how to experience a pond. Reading Walden in a library is just not the same experience as having the sand between your toes on a hot day, as you are being careful not to drop the book or iPad into the water.

Can there not be a government in which majorities do not virtually decide right and wrong, but conscience? – Civil Disobedience

His quotes about environmentalism populate the bumpers of SUVs. On Facebook and other social media sites, memes with his picture pop up, sometimes accompanied by a quote which may or may not be his original words. Take note, the comment threads of the incorrect quotes are, ironically, always the most educational and fun to read. 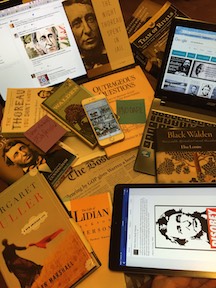 I have always felt that I’m on a first name basis with Henry. Like he’s the crazy uncle I always wanted (and still want) to grow up to be. I write plays about him and the Transcendentalists, which are based on direct quotes from primary sources. Some phrases have such resonance that they demand to be spoken out loud. It starts with one quote, then another joins the conversation, then another. And the voices get stronger, building into a larger narrative, a story from the past that wants to be told.

Civil Disobedience is suddenly relevant and speaking to a lot of us.

Other works are having a new moment of relevance, too. The novel turned non-fiction book 1984  became the #1 best seller on Amazon even though it was published in 1949, (exactly 100 years after Resistance to Civil Government). Or the Broadway show, Cabaret, about Berlin in between the wars. Even the movie Casablanca has a more poignant storyline now because the plot turns on crucial papers of transit, refugees who are caught between countries, trying to stay alive. And I bet you thought it was just a romantic movie.

Let every woman and man make known what kind of government would command her and his respect, and that will be one step toward obtaining it. – Civil Disobedience

With the internet, catchy phrases are democratized now.  Anyone with a Twitter account can come up with a phrase, and anyone with a sign can contribute to the conversation. The goal is to keep it short and strong. Every hashtag is a reference to a larger story. #NoDAPL is about the protest of the Dakota access Pipeline by Native Americans and allies.  “Nevertheless, she persisted,” about Elizabeth Warren speaking truth to power on the floor of the Senate and now a reminder of every bad girl who made history. And one of my personal favorites seen at a recent march, attended by a few million people: “So bad, even introverts are here.” Emphasis by understatement.

The new administration is intentionally trying to throw everything into chaos. They are trying to weave a narrative of #AlternateFacts. It is a strategy of disorientation. No matter what an individual’s political leanings might have been, every day seems to bring a new questioning of reality. Fortunately, as students of history, we may be well aware that this kind of upheaval has happened before. This new strategy of disorientation is ironically helping us to see parallels in history in relatable ways. How have the people of other regimes fought back?  History doesn’t repeat itself, it just rhymes.

“Not till we are lost, in other words, not till we have lost the world, do we begin to find ourselves, and realize where we are and the infinite extent of our relations.” – Walden

It seems that we have reached a moment in which his words are speaking to us now.

Most of the people reading this post may have spent most of their lives in a time and place where Henry is known primarily for Walden and his writings about nature. Civil Disobedience can seem like an outside echo to those living in peace, we understand that it is relevant in only the most abstract sense. It’s not even enough to be published as a stand alone volume, coming in under 10,000 words. Even a fan of Thoreau, is more likely to own it as part of a package deal with his other writings.  But those words crystalized into movements, and spoke to Gandhi and Martin Luther King Jr. and millions more, and touched the evolution of humanity in ways that cannot be quantified. Millions of people in history suddenly finding a voice.

And now, in this political moment, we are speaking out on social media, staging marches, addressing our congresspeople. Making our voices heard.

“Civil Disobedience is not our problem. Our problem is civil obedience.” -Howard Zinn

I’ve always seen his words as powerful ideas waiting for their moment. Sometimes it’s the sense that you are dipping your feet into the same pond that he swam in. Sometimes it’s the sensation that you must make your voice heard, especially against a government that perpetrates evil. That’s what makes this country great, the ability to criticize with your right to free speech (at least for now).

This is Henry’s 200th birthday year. There is no better birthday present (or Valentine) for an author than for his/her words to become relevant. What a gift.

Tammy Rose is an award winning playwright and artist. In 2016, she wrote & presented “Skimming the Surface: Thoreau vs Schultz” at the Thoreau Society Annual Gathering and “Transcendental Ghosts of Fairyland Pond” in the Hapgood Wright Town Forest of Concord as part of the Emerson Umbrella Summer Art Ramble. In 2014, she brought SENSE (another one of her plays) to the Thoreau Annual Gathering.

Note to reader: To remind everyone, in Henry’s day, women did not have the right to vote in America.  I’ve decided to “collaborate” with him to help him update his language to the current legal voting status of women.  Thus all male pronouns will have female pronouns standing in solidarity next to them.  Dear reader, if you feel this offends you, or worse- if you feel this does not matter- take heed, it will matter to your daughters.