Last month I gave a talk about Henry Thoreau at a public library. More than a dozen people were in the room. I opened the gathering as I always do: by asking the audience members what they remember about the man. Whatever they come up with helps to drive the rest of the presentation. Typical responses are these:

“He followed The Road Less Traveled.” (Well, no, that was Robert Frost. But Henry probably would have liked that poem.)

“He was friends with Emerson.” (Yes.)

“Didn’t he spend a night in jail for not paying his taxes?” (Yes. That’s where Civil Disobedience comes in.)

“He went home for dinner every night and took his laundry home to his mother.” (What 19th-century man would have done differently?)

Actually, most people know at least something true and authentic about Thoreau. And I can tell when I meet someone who knows more details than the others do. This was the case at this particular talk. The first person who raised her hand asked, “Didn’t he make pencils?”

I try to remember to bring up the Thoreau pencils later, if no one mentions it earlier. Sometimes I forget and am distracted by other Thoreau stories. I’m always grateful when someone prompts me for it. Perhaps the topic of pencils came up this time because we all had back-to-school days on our minds.

The Thoreau family came into the pencil-making business through Charles Dunbar, Henry’s uncle on his mother’s side. Eventually Henry’s father took over the firm, and it became John Thoreau & Co. Henry himself figured out a way to get the right clay that would bind well with graphite and produce a better pencil. He then labeled them with numbers 1-4, according to their hardness. The number 2 pencil was about average when it came to hardness and darkness. It didn’t smear as much as heavier pencils did. 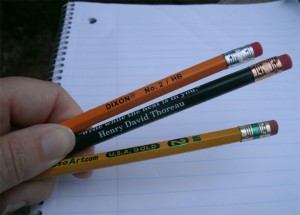 The connection between Henry Thoreau and the pencil-making business is a fun one to think about and to talk about. Maybe this is because it’s something that’s slightly unexpected. We connect Henry Thoreau so closely with nature, philosophy, and social justice that such a small and practical matter like the act of making or using a pencil gets overlooked.

The next time you’re holding a number 2 pencil in your hand – even if it’s just to shade in a few tiny circles on a standardized form — you can thank Henry David Thoreau for the opportunity to do so.