Thoreau & Twain on Learning and Loss

Unless you’re shelving classics in alphabetical order by surname, the names of American authors Henry Thoreau and Mark Twain don’t usually surface at the same time. The two men never met, although their lives overlapped by 27 years. Twain began his writing career just as Thoreau was ending his. By then, they were based on opposite sides of the country. Their writing styles and choices of topics differed widely, of course. But both wrote travel narratives. And both were known for their keen powers of observing the activities of nature and man. Overall, Henry focused more on the first; and Mark, more on the second. Both had unique senses of humor, too. 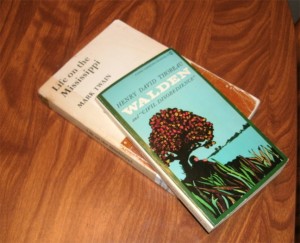 Thoreau and Twain Together

One issue they may have agreed on was the costs they both incurred by choosing a certain way of earning money. They could have debated their results. Is it possible to be TOO familiar with Nature? Do we lose something irreplaceable when we gain too much technical knowledge of the natural world? Consider these two passages.

In his journal entry for January 1, 1858, Thoreau mourns the loss of finding wildness after conducting a lot of surveying:

“I have lately been surveying the Walden woods so extensively and minutely that I now see it mapped in my mind’s eye – as, indeed, on paper – as so many men’s wood-lots, and am aware when I walk there that I am at any given moment passing from such a one’s wood-lot to another’s. I fear this particular dry knowledge may affect my imagination and fancy, that it will not be easy to see so much wildness and native vigor there as formerly. No thicket will seem so unexplored now that I know that a stake and stones may be found in it.”

Compare these thoughts to those in Twain’s book, “Life on the Mississippi,” in Chapter IX, called “Continued Perplexities.” He describes losing the ability to see beauty after learning to navigate a steamboat across the muddy Mississippi:

“Now when I had mastered the language of this water, and had come to know every trifling feature that bordered the great river as familiarly as I knew the letters of the alphabet, I had made a valuable acquisition. But I had lost something, too. I had lost something which could never be restored to me while I lived. All the grace, the beauty, the poetry, had gone out of the majestic river!”

Twain recalls – to a time when he was known as Sam Clemens – how he once had been captivated by sunsets or by moonlight reflected in the water. He could relish the sights of ripples, sunken logs, and other imperfections that made the river view more interesting. These were the same idiosyncrasies that could have consequences if you happened to be steering a paddlewheel craft through the water. Now all he could see were potential navigational obstacles.

“But as I have said, a day came when I began to cease from noting the glories and the charms which the moon and the sun and the twilight wrought upon the river’s face; another day came when I ceased altogether to note them. … No, the romance and beauty were all gone from the river. All the value any feature of it had for me now was the amount of usefulness it could furnish toward compassing the safe piloting of a steamboat.”

These are sad words to read. Especially since both men were writing about their home territories and about places they loved. Walden Woods. The Mississippi River. I hope they both overcame these losses, and that these were only temporary setbacks. Or maybe the stresses were more complex. Maybe the men also inwardly bristled at the situations that forced them to be responsible to others for that keen but necessary focus on science and mechanics. Henry reported to the landowners. Young Sam Clemens’s duties were to a steamboat company and to an ever-changing packet of passengers. Neither had much time for sheer appreciation of the landscape.

And yet, I keep Thoreau and Twain in mind as I continue to read and learn more about plants and animals and habitats and such. If I’m in the forest, and I come upon a leaf that I recognize, will I be apt to say, “That’s a white oak,” and never look up at the terrific silhouette of the tree it came from? I wonder: If we learn “enough” about the natural world, do we risk never having another chance to witness its wildness or beauty? Will the facts always get in the way?

I can’t be the only one who worries about this dilemma. Surely scientists and park rangers must wrestle with it, too. Do you?