A Good Walden Is Hard To Find

Posted on July 7, 2014 by Sandy Stott | Comments Off on A Good Walden Is Hard To Find

On a Friday, my day-job boss told us that our workplace wouldn’t have electrical power on the following Monday until 2 p.m. Our computer-based jobs would be suspended until the electricity came back on. If we wanted to, we could still come in and do other manual tasks instead. Suddenly I saw terrific potential for an extra four or five hours to work on my manuscript at home. So I told the boss that I would see him at 2 p.m. on Monday. And I left to create the perfect, home-based writer’s retreat.

When we rented this ranch house eighteen months ago, I set up my office in a room in the basement. It’s big enough for my desk and printing station, most of my personal library, and most of my research files. The space is quiet and is fairly nice to sit in throughout the year, and it is super cool during these hot and humid days of summer, without having to turn on any air conditioning. It’s got only one window, though. It doesn’t open, and it looks out onto the carport. All I can see from my desk is the left-rear tire of my Dodge Avenger. It’s A Room without a View.

I’m in the midst of writing a book about Henry David Thoreau that’s aimed at a middle-school age audience, and I want to be inspired by nature as I write this manuscript. I want to be able to see leaves and trees and greenery growing around me, as I gleefully tap the keys on my laptop. I want an outside office.

Happily, this house also has an enclosed porch around back. You can reach it only by walking through the carport and using the door that leads to the yard. So far I’ve used it for storing stuff that hasn’t made it into the basement. But past the 10-speed Schwinn and underneath the many boxes and my thick rolled-up sleeping bag is a table and four cushioned chairs. All along I had intended to sit out here and write. I just hadn’t done it yet. So over the weekend, I dragged some of the boxes down the stairs, and I piled others into corners. I cleared off the table and prepared my space. I got it ready for my Monday morning writing marathon. Here I could sit and type and look out at the trees and the shaggy grass that I haven’t mowed for a while. This would be the beginning of a beautiful relationship. 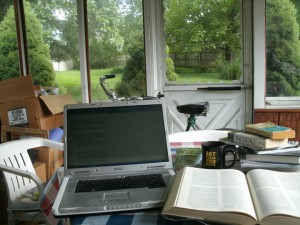 Henry Thoreau went to the shoreline of Walden Pond to write. Oh, sure, you can say that he wished to live deliberately and wanted suck out all of the marrow of life. But really, he wanted a nice space to figure himself out as the writer he intended to be. His first self-imposed assignment was to write a book about his Concord and Merrimack boat trip with his brother John. So he left the Thoreau home – which could be a busy and noisy one, what with all the visiting aunts and boarders and such – and moved a mile away to a small house he built on Emerson’s lot along the pond. The view from his doorway was a dirt path that led to a lazy tree-lined cove. The only disturbances to this bucolic setting were the occasional trains running along the nearby Fitchburg Railroad line, heading either to Boston or to Fitchburg. Lucky Henry.

I got up on Monday morning in a great mood. This would be the day I would go out and write in the porch! I would adopt a more productive writing routine, and I would finish a nice chunk of Chapter Four. Hooray! But as I ate my breakfast, I heard disturbing sounds coming from outside. Dump trucks, heavy equipment, scraping noises, early morning man chat. Then the beep-beep-beep of a Caterpillar backing up. I looked out of the window to see what was up. That’s when I saw the township trucks and the men in fluorescent green shirts walking around with measuring wheels. Surprise! They were ripping up our road, for who-knows-what reason. They were putting out the red cones to close off the intersection. And there was no telling how long this project would last, or how much noise it would make.

Now, I don’t need complete silence to concentrate and to write. I can sit in a corner of a busy fast-food restaurant and type away for as long as my laptop battery lasts. But today was supposed to be my perfect day for porch writing. I was supposed to hear bird song and the natural nuances of the neighborhood. My suburban sanctuary was suddenly the site of road work. I wasn’t sure what to do.

I trotted downstairs to check on my basement office. I could barely hear the trucks here. It would be a quieter place, and one that would surely stimulate creativity. Plus, all of my reference and Thoreau books were here. No, I told myself. You need to go to the porch, in spite of the noise. You need be outside. You need to make this situation work.

So I came back upstairs and made several trips out to the porch: carrying my laptop, a selection of reference books, a notebook, a pen, and my mug of hot tea. I sat myself down and turned on the computer. The angle of the morning sun made it difficult to see the screen. And if I moved it and myself to another side, the shade made it too dark, and I couldn’t look out to the yard. Well, I’d just have to compensate until the sun rose over the roofline. I squinted out a window. It shouldn’t take too long.

Off and on, I worked on several paragraphs for Chapter Four. But new distraction appeared: of course our wifi connection was still accessible out here. Checking e-mail and Facebook were too-easy diversions, even if I warned myself not to click on them. And then there was the issue of the tea. I had to keep going back inside to the kitchen for more. Granted, when I worked in my basement office, I also had to keep climbing the stairs for more tea. This was a challenge I had to surmount in both places. I needed to find a bottomless source of hot tea to keep me going.

Two feline muses watched me with interest. Maizie, our indoor cat, looked over my shoulder from the kitchen window. Jackie Blue, the little stray kitten I’ve been feeding outside, came into the porch every once in a while to check on me. She swirled around my feet, jumped onto a chair and then on the table, and rubbed against the edge of the open laptop. I stopped her from walking over the keys. I like her well enough, but I was not about to give her editorial control.

I heard the road workers talking and scraping and digging in the distance, with lots of intermittent back-up beeps. But I resisted the temptation to see what they were doing. Gradually I realized that they had given me a gift. Closing the road meant that the regular bus line was temporarily diverted to another street. I wouldn’t hear buses or any of the other traffic that we normally had. And when the men broke for a lengthy lunch, the world got a lot quieter. My creative juices began to flow.

Then I wondered how my writing retreat compared to Henry’s Walden house. He told us that his was “a tight shingled and plastered house, ten feet wide by fifteen long, and eight-feet posts, with a garret and a closet, a large window on each side, two trap doors, one door at the end, and a brick fireplace opposite.” How big was my room? I went back to the kitchen, got the contractor-grade measuring tape out of the toolbox from underneath the sink, came outside and unrolled it across the porch floor. The measurement was about eleven feet by nine and a half feet. In square footage, my space was smaller than Henry’s was. Also, I didn’t have a fireplace, a root cellar, a garret, or a closet as he did. But I was surrounded on three sides by windows and I had four chairs, not just three. (“One for solitude, two for friendship, three for society.”) I guess my fourth one was for the kitten.

Somehow, over the course of those four and a half hours, in spite of responding to many distractions and in spite of running back for more hot tea, I was able to get 700 good words added to Chapter Four. Then it was time to close the laptop and the books, and to head off to the day job. I was pleased with my progress. I was pleased with the layout of my suburban writer’s retreat, my Walden away from Walden. I hoped to return to it very soon. But I also hoped that the township guys would be finished with the roadwork by
then. That beep-beep-beeping can back up right over your brain.

Comments Off on A Good Walden Is Hard To Find