Mars and the Spider

Posted on March 30, 2018 by Margaret Carroll-Bergman | Comments Off on Mars and the Spider 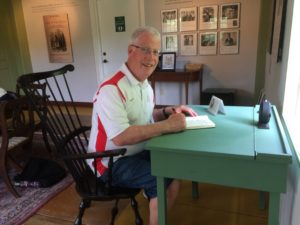 Tom O’Malley in the birth room at Thoreau Farm.

In this time of war, I am not surprised to see the planet Mars burning brightly in the night sky. Ah, Mars, the red planet. No other heavenly body calls up such fantastic images in the human imagination. My Mars is the Mars of Ray Bradbury, a frail, sand-tossed world where elegant alien creatures await the demise of their species aboard fabulous ships that ply the wine-dark waters of their evaporating canals. Mars. I have seen your polar caps through the lens of a small backyard telescope, and have conjured pictures of ice and water flowing down to byzantine towns along the equator.

I remember back in 1969 when Neil Armstrong was kangarooing on the lunar surface, enthusiastic NASA men were predicting human landings on Mars by 1980. I planned to go myself, until I found out that advanced Math was required in the astronaut world. So here we are in the 21at century, and there are no footprints on the red planet yet!

Last year, Mars was one of the brightest objects in the night sky. I did not want to pass up the opportunity to get a good look at our celestial neighbor, so my daughter Nora and I headed out to our cabin in the country to get an undistorted view of this mysterious planet. We arrived a bit before dark. Everything was quiet as the sun descended into the treetops. Our resident barred owl hooted welcomes to the evening.

Back up in the woods, the chickadees and jays settled into their night time perches. Off in the distance, a lone coyote barked. Nora and I sat on the porch step waiting. She looked back to the house.

I turned, half expecting to see the god of war sitting on our roof. Instead, a daddy long legs spider meditated on the gutter.

“Is it sleeping?” asked Nora.

“I doubt it. I think it is just practicing patience.”

Nora thought about that for a moment.

“Then I think you should kill it now,” she urged. “Crush it before it gets into the cabin.”

I was shocked at first. Perhaps the approach of Mars had somehow transformed my daughter from a cheerful teenager to a blood thirsty spider killer. Then the spider moved gracefully along the gutter line. Her tai – chi movements, so slow and deliberate, charmed my Nora. Her bloodlust disappeared.

My heart buoyed. Peace was restored in our valley.

As we studied the spider, so domestic over our doorway, Mars crawled above the horizon, a drop of blood beaming in the darkness. It was the brightest object in the sky.

Perhaps war and peace are not really opposites. After all, the mythical war god and Venus were secret lovers. Imagine the weary warrior pulling off his armor at last. Finally, he opens his battle scarred arms to the goddess’s soft embrace. Mars had never allowed himself to be so vulnerable, so unguarded. And from this union, the grizzled warrior, perhaps, found peace at last.

That night, Mars beamed bright beyond hope. Nora and I sat silently and watched its journey through the Zodiac. Our spider danced undisturbed along the wall. And at least for these few hours, Mars put down his tools of war and embraced the steady heart of love.

This entry was posted in General, Living Deliberately, The Roost. Bookmark the permalink.