“The history of a woodlot is often, if not commonly, here a history of cross-purposes, of steady and consistent endeavor on the part of Nature, of interference and blundering with a glimmering of intelligence at the eleventh hour on the part of the proprietor.” Thoreau, Faith in a Seed.

While I read a morning poem, the snow wanes. A few tiny flakes slant still in from the north; spaced even father apart, a few fat flakes fall like random punctuation undecided about the day’s line – here and here; that will do. A flurry at the feeder makes me look over, reminds me to fill its sleeve before turning out to work.

Last evening, I went to a meeting of fellow citizens on two of our town’s commissions. Our charge was to look over a 30-year mistake involving two small parcels of a subdivision that had been set aside for conservation or recreation land and somehow never conveyed to the town as was intended. The recreation lot, suitable only for “passive recreation,” which is an oxymoron of sorts and to most of us means watching trees grow, had the added question of a right-of-way. That drive could only pass through in the shape of a question mark. More possible punctuation.

Tucked behind the houses and still-to-be-built lots was the prize. Down its few-acre center runs Great Gully Brook, and given our underlying sand-plain, this deep cut also features fragile banks. Not far to the south of the site, the brook runs into a broad, mud-rich bay, and also nearby are a couple of wildlife corridors. Smelt are rumored to run in the stream, and, reportedly, turkeys have become its bully-birds. So, keeping the brook’s gully intact is important for the bay, which needs no more silt, and for the fish who would swim and spawn there. The birds and quadrupeds who use it as passage also recommend the gully.

All of this was rich fodder for a little dreaming as the meeting-clock ticked forward. Each night the long darkness comes first to this gully, and through it pass any number of night wanderers; through it too pass the always-waters of the brook, on their way to the bay. 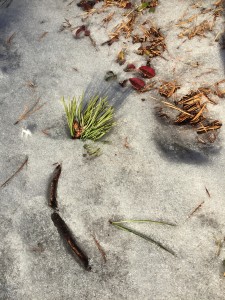 The current residents, who like their gully neighbor and want it protected, were at the meeting in numbers. They offered sightings of wildlife and the added life of having such a neighbor. The question-mark right-of-way, they said, was in such a shape because it needed to skirt the gully at enough distance to preserve its banks. They warned of disturbance, of loosing the banks and sending them to choke the bay.

Our commission, which will end up holding title or rights to the gully and so will become its overseer, listened to these stories carefully. We are already maxed out with such seeing over. But the right thing is what must be done – it’s part of being part of a town, of looking out for and after where we live. It is, we hope, the eleventh-hour “glimmering of intelligence” that joins us to our land. It helped to imagine Great Gully’s water running in the night and all who follow it to and from the sea. Even as we talked and listened that life was pulsing along the gully.

Comments Off on A Town Meeting – Seeding February