“Each town should have a park, or rather a primitive forest of five hundred or a thousand acres, where a stick should never be cut for fuel, a common possession forever, for instruction and recreation.” ~ Thoreau’s journal, October 15, 1859

Earlier this summer, I spent an afternoon at a state park I had never visited before. The place had once been a farming community with a creek running through it. The properties were flooded in the mid-1960s, when the state built a dam and a reservoir to supply water for a nearby town and paper mill. The park and the lake opened for public use in 1970. To give you some perspective, I can tell you that the park itself is ten times bigger than Walden Pond State Reservation. The lake is 20 times bigger than Walden Pond. But this is not a glacial lake, like Walden is. The water has filled in the natural nooks and crannies of an irregular hilly landscape. One of the larger fingers of the lake had a nice trail that followed its curves for a mile and a half. I decided that this was the path I would take. It was a sunny, warm, blue-sky day. My schedule was my own. I could saunter and spend as much time here as I wanted to. Or not.

Because of the location of the parking lot, it made the most sense to take this trail clockwise, with the water always to the right. So off I headed, with the woods and thickets on one side, and the water and wetland vegetation on the other.

I was only starting down the path when I already heard rapid footsteps right behind me. I stepped out of the way just as a small boy dashed past. His father wasn’t too far behind, running with his cell phone held in an outstretched hand. From it, I heard a metallic female voice say, “Follow the trail around the curve.”

“Do you know about this stuff?” he called to me, waving the phone, while he was on the run. “It’s GREAT!” And away he sped.

I shook my head to myself. I stopped and admired the wider view of the sunlight hitting the lake. When I peeked over the cattails, I saw three nice-sized turtles sunning themselves on a log. I quickly turned back to share this news with someone, but the man and his son were well out of sight. They’d zipped right past these guys without even seeing them, without even guessing that they could and would be here. Their app must not have been programmed for possible reptile sightings. How could anyone hope to digitize a dynamic park experience? 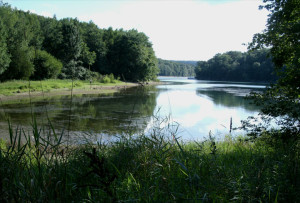 The path dipped down to a place that higher water had once covered. Ridges of mud marked with hiker tracks crossed the middle of the walkway. I stepped around the spot — not because I wanted to keep my boots clean, but because I saw four butterflies landing and swirling and twirling just above the mud. Two tiger swallowtails and two black swallowtails were taking turns at … well, SOMETHING. I couldn’t see anything there that would interest either them or me. But then again, I wasn’t a butterfly.

I looked up as two young power walkers, a woman and a man, came striding down toward me. I pointed to the butterflies and said, “Don’t step on them.” Neither body broke the pace, but they duly stepped around the mud, just as I had done.

“What are they doing?” the woman asked, looking down, but not missing her beat.

“I don’t know,” I said. Then I pointed back up the hill. “There are three turtles on a log up there, too.”

“Cool,” she said. But she and her partner kept right on marching, with arms swinging in time. Making a stop for random butterflies or turtles was obviously not part of their fitness regimen. They too were soon out of sight.

Onward I meandered. I came to a paved road, a remnant of the days when this area had been farmed and peopled. The road dead-ended at the water’s edge. It offered a nice view of the lake and the flocks of Canada geese that floated on it. But it wasn’t the trail I was supposed to follow. So I backtracked and found the turn-off that I had missed earlier. I picked up a nice big feather that a goose had left behind, and I tucked it into my notebook. Then a family of four humans walked toward me, led by a panting beagle who was straining forward on his leash. Well, there go the geese, I thought to myself.

We made small talk about which route to follow: the path or the road to the water. They weren’t sure at first if they were even going to continue. The two children were fairly young to be expected to walk the whole length of this trail. “Did you see the turtles at the beginning?” I asked. No, they hadn’t. I didn’t even ask about the butterflies. “Well, if you decide to turn around and go back that way, be sure to look for them.” They said they would. But in the end, they headed up the hill to continue around the lake. I stopped to consider the straight row of young sugar maples that lined the road. Someone or something had planted them, for sure. I tried to imagine how the place had looked when people still lived here.

Two hefty middle-aged men in shorts came toward me. We too had the same discussion about the differences between the road and the trail. They followed the road to the water. I headed up the hill to continue along the dirt path.

At the top of the ridge lay a relocated cemetery. All of the surnames on the stones were of German origin, and the lives they represented dated to the 1800s. They had made good homes here. And now they were resting in a peaceful place, in the midst of a state park. The silence was broken by a wood thrush call from the thicket farther back in the woods. Henry Thoreau’s favorite bird! What a lovely song it had! I stood and listened and smiled. And I hesitated. Should I keep walking? Or should I just stand here and listen to the thrush? I wasn’t following anyone else’s timetable. I didn’t have to be anywhere else. So I stood for at least five minutes, then walked as slowly as I could, gradually away from the thrush’s song. Eventually I couldn’t hear it anymore. I was happy to have heard it at all.

Sudden crashes came from the underbrush between me and the water. I expected to see a deer or a turkey burst through the bushes. Instead, I spied the two men in shorts. They had decided to bushwhack their way from the dead-end road to a place farther along where they could catch the path. They were red-faced and out of breath by the time they reached me. “You took the road less traveled, I see,” I said. “Yup,” said one. Then they turned onto the path in front me and hurried on their way. I wondered if they had noticed the poison ivy growing on the hillside that they just passed through. Ah, well, they were already gone now. They would probably find out later, one way or another. 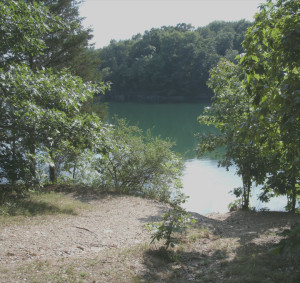 I found another spot to watch more Canada geese. They floated, occasionally chatted to one another, and then finally paddled on to another cove. I took the feather out of my notebook and laid it in the grass. I didn’t really need it. Maybe another park visitor did.

When I reached the end of the trail, I found three members of the family of four, all in a slight panic. The beagle was flopped out on the grass, panting in exhaustion. No one had thought to bring water along for him. They were giving him the remainders of their own bottles. The father had run off to get more. I didn’t have anything to offer them, unfortunately. I could only hope that their neglect wasn’t life-threatening for the animal. I shook my head to myself as I crossed the bridge to loop back to the parking lot.

A dozen of us had shared the trail for an hour or two that afternoon. We had vastly different experiences. Did everyone get what they expected? Did everyone have “a good time?” The dog definitely did not. And the two guys in shorts may have ended up with a negative delayed reaction because of their trailblazing. They may have had to search their medical cabinets for stray bottles of calamine lotion that night. I can confirm that I had an enjoyable outing. Otherwise, who am I to judge?

Yes, Henry, it is. And I’m thinking that perhaps we need to give people lessons in this great art, before we turn them loose into public parks.

2 responses to “Everybody Needs a Park, Part II – Encounters”