“I went to the woods because I wished to live deliberately, to front only the essential facts of life, and see if I could not learn what it had to teach, and not, when I came to die, discover that I had not lived. I did not wish to live what was not life, living is so dear; nor did I wish to practice resignation, unless it was quite necessary. I wanted to live deep and suck out all the marrow of life, to live so sturdily and Spartan-like as to put to rout all that was not life, to cut a broad swath and shave close, to drive life into a corner, and reduce it to its lowest terms.” ― Henry David Thoreau, Walden

Gardening deliberately is how we manage the 1878 Kitchen Garden at Thoreau Farm, the birth house of Henry David Thoreau.

Such gardening is also one way to live deliberately and to become more present to all that is unfolding within and around our garden.  A garden is a place of constant change, and, If we are conscious and aware of its nuances, we can be more responsive to its needs. Here at the birthplace, we explore all garden choices carefully, making decisions reflective of our deepest values and principals.  I do not follow any single practice or school of gardening, no pre-set protocols. Instead, through study and experience, I’ve equipped myself with a wide variety of approaches, using the each one to meet the challenge of the moment.  I rely strongly upon observation and experimentation, and, in turn, the garden regularly reminds me to be open and aware, present to the moment.

Thoreau Farm’s garden is entirely individual – it will never be exactly replicated anywhere else, not even in the same spot from one year to the next. And so, no famous book, gardener, farmer or horticulturist can know what to do with this kitchen garden better than those who tend and visit it often.

Like any type of deliberation, gardening deliberately is the opposite of living on “autopilot.” It is responsiveness, not knee-jerk reaction. It involves being fully alive to the experience, not being distracted, numb or deadened.  The sights, smells, sensations, sounds and tastes of the garden … the patterns and colors, the scent of the leaves, the feel of the wind – these are a source of much of my joy as I work here. 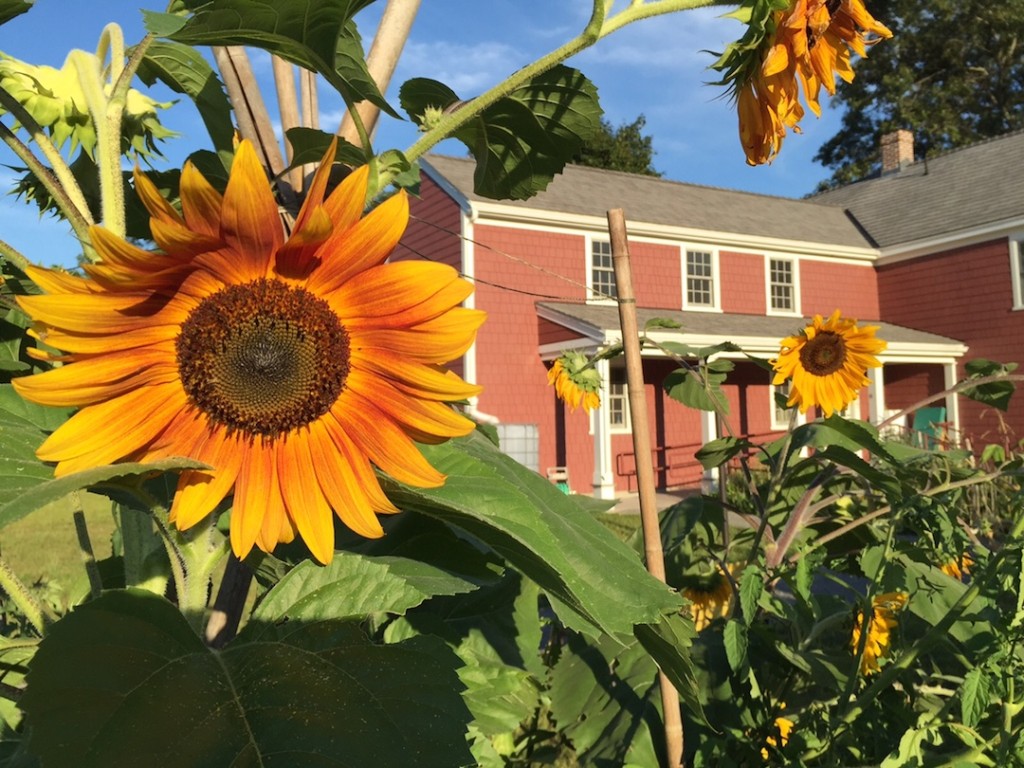 Deliberate laziness
“The true cost of a thing is the amount of what I call life that is required to be exchanged for it.” Henry David Thoreau, Walden

And so I ask:  Is “the amount of life required to be exchanged” for these garden tasks really worth their cost in time, energy, money, and opportunity? And from the sunflowers, from the squash, I hear answer – “Yes, they say. Yes.”

What is truly the most important task in the garden today? What is really not crucial, or even a waste of time?  How much is on the list because it’s what we think must be done – because that is what we have been told to do by others?

Such deliberation almost always leads to simplifying, throwing out some hallowed methods in favor of ones that more closely mimic the processes we discover. In doing so, we have ended up with what we think are some very effective gardening methods that also are a lot less time consuming and exhausting.

Let me give you an example of deliberate laziness we’re practicing during this nearly rainless and hot summer. Wild animals are desperate for water. Baby ground hogs and rabbits amazingly fit between our one-by-four-inch fence wires, and have eaten all of our beans and brassicas down to nothingness.

We could spend a lot of time and energy replanting multiple times, and go to all kinds of extreme measures to exclude, trap, or kill these animals. But we realize humans do not depend upon these particular crops to survive, and that replantings will end up being eaten by the next litter of baby rabbits (rabbits produce up to three litters per year; woodchucks, just one). We could also get very upset and angry at the animals, declaring war on them. But that, too, is likely a waste precious human resources.

So we are instead choosing to be happy with the crops we have that are growing well, despite the weather. We’ve chosen instead to exercise our “citizen scientist” muscles and learn from observing the garden under these conditions. Now we’re noticing what crops thrive best in the dry heat, and which are struggling. We’re also seeing which parts of the garden are doing better than others due to variations in soil quality, identifying areas we should improve this year or next. This is all important to learn as more extreme weather patterns become the norm, and gardeners need to adapt to varying unexpected conditions.
There are as many trends in gardening as there are other here-today-gone-tomorrow fashions. There are also sound gardening practices that become overblown into rigid, unbending systems with dozens of rules that adherents demand be followed exactly. You must, you should… you cannot, you must not. Adhering to so many pre-set rules is not being responsive to your garden, your conditions, your abilities.  Too many rules can actually create failure, not success, because their requirements are often complex, and there are too many to follow dependably. Such complexity also risks feelings of failure and anxiety in the gardener, which intrude on the joy of putting hands into warm, fragrant soil.  How often do we end up feeling that we can toil all day and never get everything done, much less done correctly or well?  Such work is not gardening deliberately, though it is a form of gardening.

It turns out that deliberate laziness was deeply intertwined with Henry Thoreau’s life and philosophy, though he never used the term.  He wrote that he became rich by intentionally reducing his wants. By living simply, he determined he could meet all his needs by working a mere six weeks a year.  In 19th century American terms, he was considered extremely lazy.  In 21st century terms, unlike so many of us, Henry was not too busy to pursue his self-created life path.  Only six weeks of work annually – think about the richness of life you could experience in 46 work-free weeks every year!

Reading about kitchen gardens in the 19th century suggests they were not the place for laziness, deliberate or otherwise.  Mostly tended by women who toiled endlessly, these kitchen gardens leave me utterly depressed and discouraged. But by applying the standard of deliberate laziness to Thoreau Farm’s kitchen garden we’ve updated the form to one that is far easier for 21st century denizens to embrace.

Comments Off on A Deliberate Garden