Henry in the Hills

“On the tops of mountains, as everywhere to hopeful souls, it is always morning.” Thoreau – from an early draft of Walden

Recent research, on page and on foot, has taken me to some of Henry Thoreau’s upland excursions, the ones where he traveled a good deal beyond Concord rather than within. In particular, I’ve been reading and imagining about his two journeys into the White Mountains and up Mount Washington.

Henry Thoreau first went to the White Mountains in 1839, beginning his two-week trip with his brother John on the Concord and Merrimack Rivers, thereby seeding the narrative of his first book. One might suspect that Thoreau’s climb of northeastern high point, Mount Washington would show as a high point in his notes, but it passes in a single clipped sentence. The meandering rivers get their due, as they do also in his first book, A Week on the Concord and Merrimack Rivers. But Thoreau’s overland mountain tour in 1858 is, in his journal, a different story; its chronicle covers more than 60 pages, and it is rich with detail.

In his dates and in his commentary, Thoreau catches nicely the early history of climbing on our White Mountains. In 1839, Thoreau and his brother weren’t first on the uplands, but they were part of the vanguard of visitors drawn to its transcendent landscape. Twenty-one years later, Thoreau and his companion Edward Hoar arrived at the height of the pre-Civil War tourist boom: now there were two hotels on top of Washington, and, though Henry, per usual, relied on his own two feet, scores of tourists now rode their way up prominent, popular mountains on bridle paths. 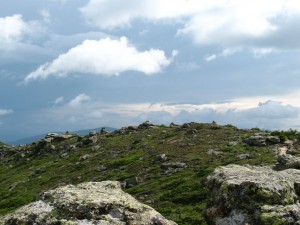 As with many activities that drew throngs, Thoreau later had something to say about mountaintop buildings: “I think that the top of Mt. Washington should not be private property; it should be left unappropriated for modesty and reverence’s sake, or if only to suggest that earth has higher uses than we put her to.” 1/3/61

But what catches my modern eye is his July 8th description of leaving Mount Washington’s summit in the fog, bound for Tuckerman Ravine:

About 8:15 A.M., being still in dense fog, restarted direct for Tuckerman Ravine, I having taken the bearing of it before the fog, but Spaulding [a summit hotelier] also went some ten rods with us and pointed toward the head of the ravine, which was about S 15 degrees W. Hoar tried to hire Page to go with us, carrying part of our baggage, — as he had already brought it up from the shanty [along the carriage road where they spent the prior night] — and he professed to be acquainted with the mountain; but his brother, who lived at the summit, warned him not to go, lest he should not be able to find his way back again, and he declined. The landlords were rather anxious about us. I looked at my compass every four or five rods and the walked toward some rock in our course, but frequently after taking three or four steps, though the fog was no more dense, I would lose the rock I steered for. The fog was very bewildering. You would think that the rock you steered for was some large boulder twenty rods off, or perchance it looked like the bow of a distant spur, but a dozen steps would take you to it, and it would suddenly have sunk into the ground. I discovered this illusion. I said to my companions, “You see that boulder of peculiar form, slanting over another. Well, that is in our course. How large do you think it is, and how far?” To my surprise, one answered three rods, but the other said nine. I guessed four, and we all thought it about eight feet high. We could not see beyond it, and it looked like the highest part of a ridge before us. At the end of twenty-one paces, or three and a half rods, I stepped upon it, — less than two feet high — and I could not have distinguished it from the hundred similar ones around it, if I had not kept my eye on it all the while.  Journal

Thoreau, who was a quick study, then offered comment that reads as kin to the sort of advice a reader can find in a modern guidebook about hiking, or in the lesson-drawing comments of mountain accident analyses.

It is unwise,” he writes, “for one to ramble over these mountains at any time, unless he is prepared to move with as much certainty as if he were solving a geometrical problem. A cloud may at any moment settle around him, and unless he has a compass and knows which way to go, he will be lost at once…To travel there with security, a person must know his bearings at every step, be it fair weather or foul. An ordinary rock in a fog, being in the apparent horizon, is exaggerated to, perhaps, at least ten times its size and stance. You will think you have gone further than you have to get to it.  Journal

There is, in Thoreau’s description, the hint of menace that fog and unsightedness can carry on an exposed mountain. You can quickly lose your way, become wrapped in illusion, which carries you farther afield; all the while the very rocks on which you walk seem to change size, shift shapes, reminding you also that nothing grows up here, that life’s supports are far below, and that you must go there to live on. 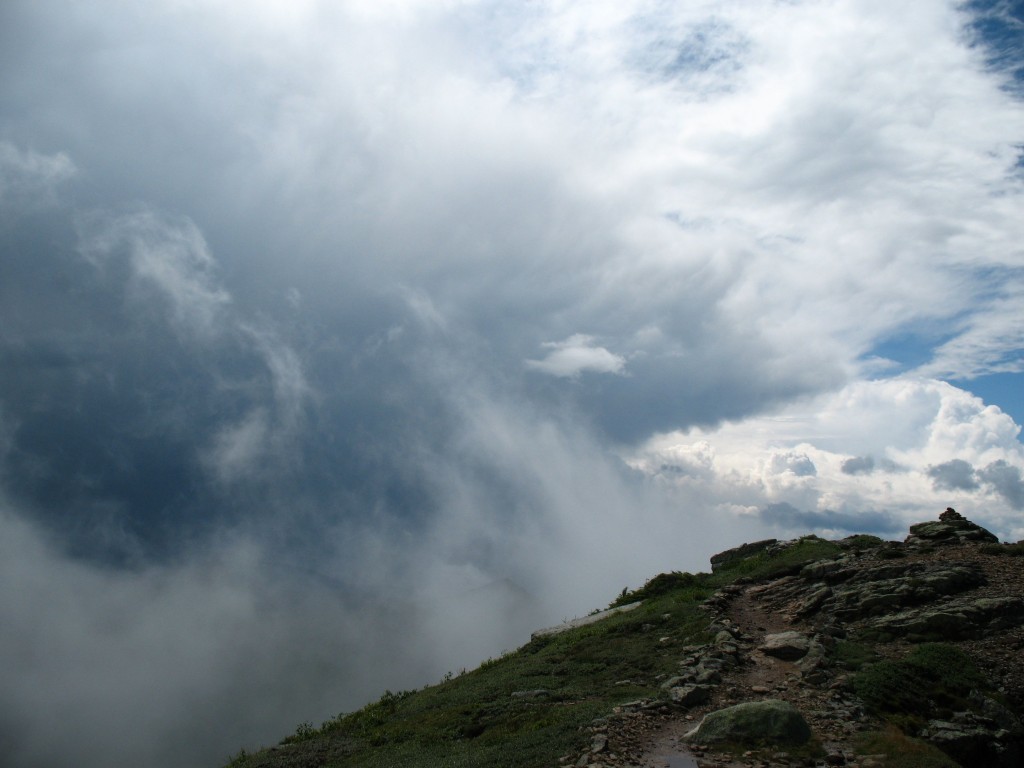 Half menace, half promise

Given good facility with a compass, measures of distance and sound footing courtesy of his work as a surveyor and his long walkings, Thoreau leads the way just there; he and Hoar and companion go down unerringly to Tuckerman Ravine. Already his foot habits are making him familiar with the land. But Thoreau also seems aware that they have reached an edge, a place where accident and trouble are close by, a place visited often by modern search and rescue and its narratives of loss. These mountains, he sees, even in early July, can be a terra of trouble.

Comments Off on Henry in the Hills