Refilling the Feeder – The Cardinal’s Yard

Recently, at the end of a long day, we pulled into our driveway ready to re-up for the slow arrival of Maine’s spring. The dirt-infused snow was still deep on the front yard, and the bushes around the house still slumped beneath the winter’s weight. But there in greeting also was a lozenge of fire, red atop the rhododendron – the cardinal who knows our yard as his territory looked directly at us and offered announcement, sort of a squall of welcome. What, he seemed to say, are you going to do about the feeder out back? 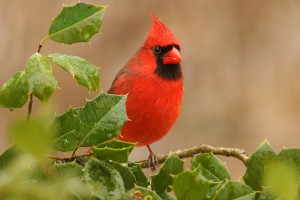 We have a holly, and we have a cardinal, but these are not they. Photo: Bigstock

So, before unpacking the car, I went to that feeder and shook out the residue of seed husks, then filled it with fresh provender.

This morning brought reward in familiar flurries. Chickadees and nuthatches, including a red-breasted one, flew in and lit to take their accustomed single seeds, which they then carried to a nearby pine. House sparrow arrived and performed his usual task – grabbing and then flinging seeds here and there before settling on one to actually eat.

The sparrow must be the cardinal’s friend because not long after he’d flung seeds this way and that, the cardinal stopped by for the sunflower seeds now on the ground. Ever-alert, he hopped and sorted among the downed seeds until he found one he liked; then he split the husk and downed the seed in a gulp. Then on to the next.

Yesterday, the goldfinches arrived. There, suddenly, they were, looking like yellow thumbs (up).

So too, one of the neighborhood cats, for whom I am a backyard Maori – unaccustomed to being chased, cats run from the expletive-spewing, hand-waving emergence from our backdoor; then at the fringe of the woods, they always look back in further disbelief, before vanishing.

I’d welcome some not-too-antisocial advice about discouraging cat-visits. I’m loathe to go to the warning sting of a b-b or pellet gun, but, clearly, I’ve considered it. Perhaps coyote urine, easily purchased these days? Perhaps you have a favorite solution? Perhaps I will post our little stamp of land, alert our neighbors, and then have at whatever slinking cats appear.

Or, perhaps, I can entice our local rooster to hang out more in our yard; the cats seem wary of him (as am I).

We’re a little too suburban to need to heed the advice to take down our feeders in April as guard against bear-visits – no bears live in and wander our local woods, even as I see sometimes a fox step from them and the wild percussion of our pileated woodpeckers sets my toe tapping.

And so, until summer starts offering its menu, I’ll keep heeding the cardinal and filling the feeder. Surely, I get more back than I give.

Comments Off on Refilling the Feeder – The Cardinal’s Yard