“We go listening for bluebirds, but only hear crows and chickadees.” Journal, 3/1/55

The light suggests it. It peers in-house before 6:00 a.m., and even amid the ongoing cold, it has crusted the snowbanks that angle toward the south. And also even as more snow filters in, the drifts have begun to shrink. The growing light is sublime. Also literally, as the shrinkage of snow comes of sublimation.

Like Henry Thoreau, I think there must be bluebirds about. And I know where to look. Back in January, when our winter looked to be a humdrum sort of thin cover and open fields, I noticed that an old relic apple tree on one of my walking routes flashed often with chips of blue color. A whole crew of bluebirds – what is the word for a gathering of bluebirds? An azure of birds? A sky of them? – favored this dense, spiky tree. Clearly, they were intent on weathering and wintering here. 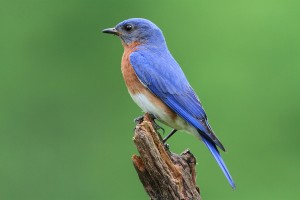 And a quick trip to my bird book showed a sliver of purple riding the nearby coast, sign of possible year-round range, even as the rest of northern New England is usually summer range only.

What about now, I wondered. Were the bluebirds, after this month of snowy onslaught, still here? Or had they, like many of us, been “innived?”

I went to look, and there along the border of snowfield and hard by an old track that promises sometime a walk into the woods, they were. Even more blue against the always white of the day. Leave aside the sobering thought that these bluebirds may winter here now because warming is on the rise. Today they are blue relief against the deep white. 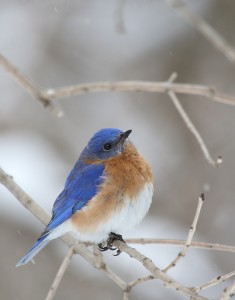 Puffed against the Cold

I like the little riot of chickadees always at the birdfeeder, and surely the crows are our most talkative neighbor. But the bluebird’s a sign I’m happy to go walking and listening for. Welcome to March.