A Thoreauvian Artist in Amsterdam

You never know when or where you will meet another fan of Henry David Thoreau. Even if the person may be long gone and may have left only a few clues behind.

In my part-time job at a bookstore specializing in art books, I recently came upon a unique catalog from 1965. It consisted of black-and-white illustrations of artwork by an artist named Viktor IV. I had never heard of him, and we certainly didn’t have any other books about him. From what I could tell, he then lived in Amsterdam and created unique pieces out of wood and other materials. This was a small and quirky publication that was probably self-published. Normally, I wouldn’t have thought too much of it. But the three-line dedication at the top of the opening page took me by surprise:

What? Wait. Who WAS this guy? I had to do some online research to find out.

Viktor IV was the professional name of New York-born artist Walter Karl Gluck (1929-1986). As a young man, he traveled around the world before settling down in Amsterdam in 1961, with the intent of being a photo-journalist. It is said that the 1963 assassination of John F. Kennedy had a profound affect on him. He immediately decided to become a full-time artist instead of a photographer. After he made a collage based on the assassination, he renamed himself Viktor IV. He set up his studio and home on a small ship docked in one of Amsterdam’s waterways. And he soon became one of the art community’s notable characters. People got used to seeing him riding his painted bicycle or walking around the city, in bare feet and dressed all in black, with wild white hair and a bushy beard, looking for inspiration. 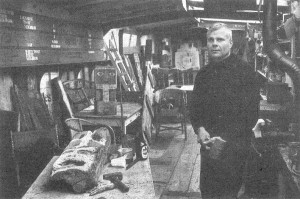 Viktor’s early art was created from driftwood and other found pieces in the river. He assembled decorated wooden panels that he called “ikons.” But he didn’t limit himself to small creations. He also put additional structures like extra masts, towers, and rafts on and around his ship. As long as he didn’t block the entire waterway, he was free to add to it as he pleased.

Throughout his life, Viktor kept a set of artist journals filled with writings and drawings. He later developed these into thousands of individual pieces of artwork. When Viktor eventually became intrigued with time-keeping, he devised what he called “Bulgar Time,” and designed a clock to run backward. You can see a virtual example of the clock on his web site at http://www.viktoriv.nl/en/home.html. It’s a tad disconcerting at first to watch the hands move the wrong way, but it’s fun.

Sadly, Viktor drowned one day while making underwater adjustments to his flotilla. He had gotten tangled in the ropes beneath his ship. He was 57 years old.

Reports say that the two people who were the biggest influences in Viktor’s life were Dutch painter Anton Heyboer and American writer Henry David Thoreau. He read “Walden” and “Civil Disobedience” at some point in his youth. How Henry led Viktor specifically to Amsterdam is not spelled out in the brief bios I read. What IS clear is that Viktor IV followed his Different Drummer, and he found his own Walden. He discovered not only where he needed to be, but what he needed to do in life. This Thoreauvian lesson attracts both the heart and the head.

Maybe today Viktor and Henry are floating in a boat somewhere, looking for driftwood, nodding to each other, and laughing about time running backward. Good for them.

One response to “A Thoreauvian Artist in Amsterdam”