An Old Book Is a Joy Forever

My part-time day job is to do cataloging for a seller of used books. Recently I was up to my ears in old children’s books at my desk when boss Kevin walked into the work room. He had been sorting through boxes of “new” arrivals in another part of the building. He had a smile on his face and a book in his hand, and he held it out to me.

“Here’s something I think you may want to see,” he said. I saw a slip of white paper sticking out of the book as I reached over my computer to take it.

As soon as I touched it, I said, “Wow.” The brown covers, both front and back, had intricate textured carvings. Bright gilding appeared on all three open edges of the pages, not just along the top. The spine had five metal rings in it. It was heavy. Now THIS was a book designed for reading and for keeping. “Homes of American Authors,” read the gilded letter titling. The flyleaves were made of marbled paper in hues of yellow, red, and blue. The title page said that it had been published by G. P. Putnam and Company in 1853. Wow again. 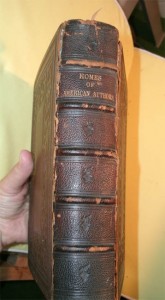 Kevin knows of my obsession with All Things Thoreau, so he often deflects relevant books to me. I’d never seen a copy of this one before, though. I figured that the slip must mark a mention of Henry. But from 1853? The book Walden wouldn’t be published until August 1854. Thoreau would so far have been known only for writing a few essays, delivering some lectures, and selling fewer than 300 copies of his first book, A Week on the Concord and Merrimack Rivers. What could this be?

The marker was tucked between pages 246 and 247, in the Emerson chapter. Of course! In the middle of the discourse about the famous resident of the big white house on the Cambridge Turnpike, the author chose to ramble a bit about one of the regular visitors to the place. It’s just one paragraph, and it’s obvious that the writer knows Thoreau. He finds it unusual that Henry hasn’t yet kicked up any arrowheads on the Emerson property:

The site of the house is not memorable. There is no reasonable ground to suppose that so much as an Indian wigwam ever occupied the spot; nor has Henry Thoreau, a very faithful friend of Mr. Emerson’s, and of the woods and waters of his native Concord, ever found an Indian arrowhead upon the premises. Henry Thoreau’s instinct is as sure toward the facts of nature as the witch-hazel toward treasure. If every quiet country town in New England had a son, who, with a lore like [English naturalist Gilbert White’s] Selborne’s, and an eye like [French naturalist Georges-Louis Leclerc, Comte de] Buffon’s, had watched and studied its landscape and history, and then published the result, as Thoreau has done, in a book as redolent of genuine and perceptive sympathy with nature, as a clover-field of honey, New England would seem as poetic and beautiful as Greece. Thoreau lives in the berry-pastures upon a bank over Walden pond, and in a little house of his own building. One pleasant summer afternoon a small party of us helped him raise it – a bit of life as Arcadian as any at Brook Farm. Elsewhere in the village he turns up arrowheads abundantly, and Hawthorne mentions that Thoreau initiated him into the mystery of finding them. But neither the Indians, nor Nature, nor Thoreau can invest the quiet residence of our author with the dignity, or even the suspicion of a legend.

Wow again! Not only did this author know Thoreau, but he was a true friend and a fan who could wax poetic when necessary. He took a bit of literary license, since Henry’s time at Walden was from 1845-1847; and by 1853, he was living with his family in the yellow house on Main Street. Still, I wanted to know: Who wrote this piece?

I went back to the title page to find out. It unfortunately read “by various writers.” However, another page contained the names of eleven contributors, one for each chapter. Among them was George William Curtis (1824-1892), a New England-based author who wrote for Putnam’s Magazine. He lived for several years in Concord and also for a short time at Brook Farm. I’ve since learned that he was the one who penned this quick but nifty profile of Henry, embedded within his description of Emerson’s home. And it’s one of the earliest casual mentions of Henry in print media.

The old engraved illustrations in this book are simply stunning. In addition to Emerson’s house, there are pictures of the Old Manse and the homes of the Alcotts and the Hawthornes. A few pages were missing from the Emerson chapter, unfortunately. And the more I handled it, the sorrier I felt for this book. The front cover had entirely broken away from the spine. The back cover was threatening to do the same, as I discovered when I turned the book sideways to look at the engravings. The spine material was loose. All of the outer edges were worn. Some pages were aging and had a bit of foxing around their edges. It wasn’t the best gem in the jewelry box. Still, I was grateful that Kevin had taken the time to see if the name of Henry Thoreau appeared in it.

“Wow,” I said to him, after examining the book for the few minutes that seemed like a lifetime. “This is very cool. Thanks for sharing.” I handed it back to him.  “No, no,” he said, with his arms at his sides.  “I can’t sell a book in that condition.  You can keep it.” 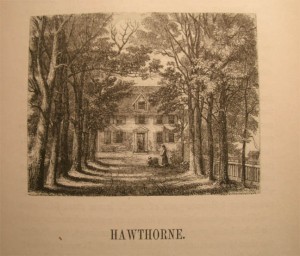 Ol Manse Illustration from the Book

7 responses to “An Old Book Is a Joy Forever”