“…he uttered a long-drawn unearthly howl, probably more like a wolf than any other bird. This was his looning…” Journal 10/8/52

One of my favorite moments in Walden is Thoreau’s “pretty game, played on the smooth surface of the pond, a man against a loon.” The passage comes from a long entry in his journal that captures the game’s exuberance and the way a day afloat feels. The longish post that follows, some of it in the company of loons, felt suffused with a companion exuberance.

I hear the first loon a mile or so after I’ve begun. The October sea heaves with the remnant swells of a storm, but the sky is bluest clear. And so the water sparkles as if shot with diamonds. A breeze from behind sets up a chop that, running sideways to the swell, jostles some, but as long as I pay attention, I’m within my ocean-going comfort zone.

The call peels up from nearby water; it is, as has often been said, unearthly or otherworldly. But that seems right because, a mile offshore and in this needle of a boat powered only by hand, this is another world. Not quite laughter, it is surely announcement. I try to respond, but I am a stuttering impersonator, hardly loon at all. The loon calls again, and now I see him, floating high in the water, distinctive in plumage and profile. “Hello, brother,” I say. 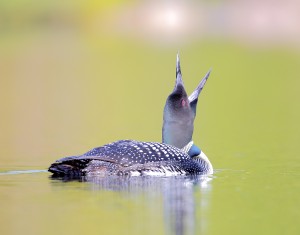 He is the first of eight loons on this seaside leg of a long circumnavigation I’ve begun. Having summered and raised kin on inland lakes, they have come to the sea for fall, and as their calls and numbers accumulate, and as the sun warms my right side after a near-frost night, I feel loon blessed for the five-mile sea-run to the river I will ascend. What better companions?

The loons float the water effortlessly, and, as I settle into this paddling, I begin to mimic them, feeling the water’s various wobbles easily, starting to become “of” rather than “on” it. 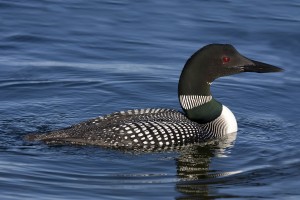 I put in for a rest-stop on Rogue Island. Who wouldn’t, after all, want a little time with a rogue? From land, I look up, eye the sky. There, in serene circles, floats an eagle. One wing flap in a minute. The day must be generating thermals; he rises still and I return to my boat.

With the tide’s easy hand behind me, I go up the New Meadows River. The swell, absorbed by islands and fingers of land, doesn’t follow, and soon I am paddling quiet water with long strokes, free to look around. The maples and oaks shimmer their golds and reds amid the green companion pines. I slide from familiar waters into those I’ve yet to paddle; I check the chart to see where Sheep Island ends and Long Island begins, musing as I do about the number of Sheeps and Longs along Maine’s coast.

And – rare moment for this sort of unhurried day – I check also my watch: the only time pressure I feel stems from the need to reach the westward turn of Gurnet Strait before or at slack tide. The tide floods in the direction I’m going, but once it turns to ebb I could face a struggle getting through. As it empties the coves and inlets around it, Gurnet Strait is said to max out at up to 7 knots; in full-muscled, short-lived sprint, I can manage 4.

I bend to this effort, pressing my paddle forward and lengthening the forward reach of my stroke; the scenery becomes peripheral, but I also like this work and the mild excitement of racing the tide. An hour later, as I pull into a eddying pocket this side of the bridge, I can see the tide has begun its ebbing flow. But it is early in the cycle, and I push through the building 2-knot current, pass under the bridge’s odd, geometric shadow and then on into wider water where the current weakens.

Gurnet astern, I begin to to descend the long throat of water that leads to the Ewin Narrows, and, as I do, I flush eagle number two from a waterside pine. Unlike his earlier cousin, this is an immature eagle, and he seems a trifle grumpy about having to fly. Perhaps the pickings are easier in this thinlet – fewer competitors, the big-folk out at sea.

And now I pick up the outflow of tide. I had envisioned a gentle float on current out to the sea and my starting point, but the wind thinks otherwise: against forecast, it presses up from the south and into my face at 10+ knots. “Really?” I say aloud to the empty water and absent sky. Really. The 15 miles accrued announce themselves in my shoulders. “Really?” they say. “Yes,” I answer. “It looks like wind all the way.”

And so I float south, pushed on by the low hand of tide and held back by the high hand of wind. When I don’t paddle, I go precisely nowhere, and so I break the deadlock and paddle toward the sea.

Just as I have been circling the limits of this island, the sun has shifted through the sky, and now it warms my same right side from the southwest. My left side continues its cool day – air temps in the 50s, water temps the same.

The bridge where the Ewin Narrows open out into Harpswell Sound marks the 5-miles-left point. Riding some quick water, I scoot beneath its high span and into the small standing waves that current and wind have fashioned. They are happy distraction from the slow soldiering on into the wind, which, soon enough, colors again the late afternoon. Morning’s loons and tailwind? Gone. The ice-smooth river to slide over? Gone. The miles usual? Surpassed…long ago. Okay, okay…keep on.

But what, dancing in seeming formation, are those ten sails down the Sound? Some seaborne Opera of the Sound? One too many energy bars mainlined? Fantasized fairy-rescue? Hard to tell. As I press on, they seem to draw nearer, and faintly I hear a whistle; it seems that every time the whistle blows the sails change direction. How quaint, how picturesque, I think…until I realize that, riding the same wind I am fighting, they are headed straight at me and closing fast.

I begin a hurried ferry across current and sound; the whistle – now clear – sounds every 20 seconds; I hear the taut sails; they draw near like an odd flock of oversized birds. Now, I can read the word “Bowdoin” on the sails. The word “irony’ flashes in my mind. I will be crushed by a fleet of choreographed collegiate sails, not by the usual kayak-worries: the Portland tour boat, or some dyspeptic lobster guy, or some speed-addled cigarette-boater. The whistle blows again, and they veer away, racing by at every knot of wind I’m fighting. The launch bearing the whistle-blowing coach chugs by after them, and in the relief of now empty water, I aim for a nearby islet.

Wyer Island barely rises above the water; it holds a clutch of small trees and its grass bends in the wind. I stretch and peer at the three rippled miles remaining. I crunch a few grains like a horse recently unbridled; then, I go back to my seat, seal myself in and shove off.

The wind has shifted 20 degrees to the southeast. There has been no hiding from it on either side of the Sound. On, like the deepest sort of snow-trudging, this walking on water…sort of. I cut through small waves; others slap my boat and splash over me. No loons, no eagles, just the waning day, which is pretty enough with its high cirrus and still-brilliant sun and peak-colorful trees…if I raise my eyes to them.

Then, a mile from return, the wind drops, cuts out; the water goes quiet in a minute, and I am sliding once again across glassiness. Light spangles the surface. And the world’s only cribstone bridge, which rises right above my little launch-beach is close enough so its huge granite blocks are distinct.

A duck idles out of my way; two men sit companionably on a dock and squint at the falling sun; a mile across the Sound someone shuts a door. I glide up to my little beach and sit ten feet offshore; I hover there, waiting for the right moment to land.