Trees for the Forest

Posted on September 16, 2014 by Sandy Stott | Comments Off on Trees for the Forest

I’ve spent much of my summer nearly past amid the trees; I became more mindful of this during a recent paddle on wide open waters near Maine’s Isle au Haut (pronounced locally, Isle a Ho). Most of the islands in this area are dense with forest, mostly spruce, birch and few white pines, and, when I pulled in for a rest stop on Wreck Island, I stepped from under a wide ocean sky into a close, lichen-papered room of dark woods. Pale green bearded-moss filtering the light hung from the trees; my eyes had to jump open a number of f-stops to see. A thin trail wound off to the right, and, for a minute, I watched it expectantly. Wreck Island is, however, now inhabited only by deer and assorted smaller animals, and so I was really peering down a trail and waiting for the past to arrive. 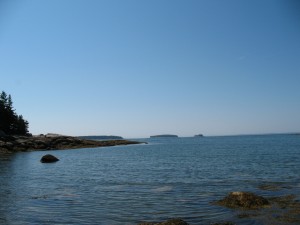 That past, in the late 1700s and throughout the 1800s, saw very different islands, first claimed and then inhabited by a mix of farmers and fishermen and soon shorn of their trees, which went for fields, buildings, boats, heat and, as the 1800s wore on, pulp. Photos from the 1880s are recognizable only in the shapes of the islands. Such shearing of woodlands was, of course, familiar to Henry Thoreau in Concord also – that long-farmed landscape was cut close, which undoubtedly helped Thoreau treasure those patches of swamp and woodland left untouched. But to find deep woods, Thoreau had to travel to interior Maine.

As I paddled amid the islands, I thought about the microcosm of regeneration each represents. All but a few have full heads of forest-hair, and the interiors of those forested islands have reverted to the timeless suggestion and mystery of woodlands. On one tiny island (Potato), the heart-shaped hoof prints of deer pointed to who lived there now. The regreening of New England has been much noted (over 80% of our region is now forested), and, as the trees and forest thicken annually, woody anomalies keep reappearing too – a mountain lion in Connecticut (DNA sampling said he’d migrated from the Dakotas), a moose on Rte 128, bears in backyard trees. Now, ironically, the most shorn of landscapes can be found in the vast clear cuts of Maine’s interior, where only narrow “beauty strips” of trees separate those who paddle the rivers from the dazed, cut-over square miles of former woods. 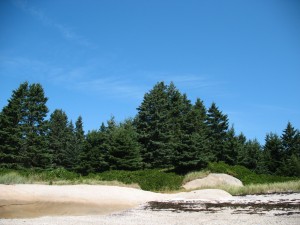 New Trees above the cove at Wreck Island

Thoreau liked to count the rings of trees and learn the outlines of their stories during the good years and the hard. Counting the trees of this summer outlines a story of regeneration that Henry Thoreau would have nodded at and liked.