One of the writing projects I’ve taken on is a biannual column about mountain accidents and searches and rescues for the Appalachian Mountain Club’s Appalachia Journal. The column’s primary purpose is educational – if we read the stories of those who fall or go astray in New Hampshire’s White Mountains, we may become wiser walkers. At least that’s the theory. The column’s readership also knows the lure of disaster stories. Along with these stories of misfortune and perseverance in the backcountry, I offer analysis of what went wrong (and right) in each instance. And I hear from readers who like to point out their own takeaways and share their own stories.

So during the warm ease of summer’s heartland, I take some days to revisit mountain tales accrued during the winter past; the column then will appear at the outset of winter next, and, theoretically, its readership then goes wiser into the winter hills. 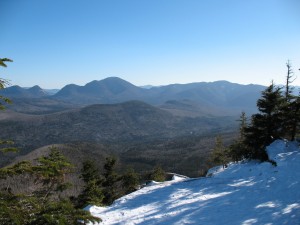 The other day, as the rain pattered companionably on the roof, I was mulling over an incident, and, at the same time, wondering what familiar walk I would take later when the rain let up. This wondering brought Henry Thoreau to mind. Famously and early in “Walking,” Thoreau sets his criteria for a walk: “If you are ready to leave father and mother, and brother and sister, and wife and child and friends, and never see them again, and are a free man, then you are ready for a walk.”

It is, of course, an “extreme statement,” and in its extremity designed to jar us from the complacency of routine – a little work, a little walk…ho hum…what’s for dinner?

The incident I was contemplating and then writing up was about a college student, who during finals week, went to the mountains, purportedly to clear his head. Here’s the summary, written in the column’s reportorial style:

On December 12th at 3:00 a.m., New Hampshire Fish and Game received a call about a missing hiker in the Franconia Notch area. David F., a Lyndon State College student, had left school to go hiking and climbing in that area the day before. He was reported to be well equipped. David had also given his roommate his intended route, and Fish and Game officers decided that he might simply be delayed and to give him time to hike out on his own. Morning temperatures were very cold (on Mount Washington at 5:17 a.m. it was -15 with the wind registering 73 mph; a windchill advisory was in effect) and there was still no sign of David F., so Fish and Game began to organize a search, which would necessarily be broad and people intensive. At 12:30 p.m., as the search was getting under way, Fish and Game learned that hikers on the Falling Waters trail had come across David not far from the summit of Little Haystack.

Fish and Game believed that David F.’s condition merited an airlift off the ridge by a New Hampshire National Guard helicopter. He was treated for mild hypothermia at a local hospital. In an interview with Fish and Game, David said that he had begun his climb on the Falling Waters trail at 9:00 a.m. on the 11th, diverging later to climb an off-trail drainage called Lincoln’s Throat; eventually he became lost, spent the night in his sleeping bag and wrapped in a space blanket and tarp, then found his way to the Falling Waters trail in the morning. When found, David F. was without his pack and gear, saying he must have lost them that morning.

Such a report sets off head-wagging among the mountain cognoscenti, as it should – conventions violated, personal ability overestimated, etc. But most of us recognize too the need to slip the trap – whether it is a spate of final exams, a daily job or the overly-civil layerings of language over experience – and go free. “Westward I go free,” wrote Thoreau later in his essay, and it takes only a slight change to say, upward I go free. I remember that, even as I point out a student’s errors in pursuit of that freedom.

One Response to Outward or Upward Bound