Why My Daily Run Is Better Than Climbing Everest

We near May, and it’s the Himalayan silly season again, the narrow slice of time before the monsoon makes already extreme weather impossible for climbing. And in the various base camps beneath the planet’s grandest mountains, expeditions are arranged like little summer camps for adults. I say this because most of the climbers there are with commercial expeditions led by guides who function as counselors – they make all the decisions, set the schedules, assess the ground and sky before them. And the “campers?” They follow along, plod and haul themselves, or are guide-hauled, through unimaginable weather and terrain; occasionally, often in clusters, they even lose their lives – it is after all an extreme camp. But mostly they do as they’re told. Some come back having “climbed” to the world’s highest summit.

Today, at noon and under the springiest of skies, I stepped from my door and set out on foot for local woods. I had in mind an hour’s run, mostly of trails softened by recent rains and outlined by a cold front’s scrim of snow. Some minutes later, I reached the old railroad grade that runs alongside the Assabet River, and I turned upstream. The grade is slight and only a few root-bundles disturb its reliable surface. And so it wasn’t long before I’d fallen into a lulling cadence and my mind had drifted free. I had mountains on my mind, mostly from my habit of carrying a topo map with me for those spare moments when I’m waiting for something – a class, a colleague, a pizza. My maps usually feature the White Mountains or local USGS quadrangles, but recently the Himalayas have been in my pocket. 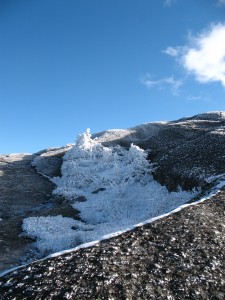 Perhaps that’s because I’ve been thinking about the long ago, when my parents realized a lifelong dream and walked 175 miles from Kathmandu to the Base Camp of Everest, took in those awesome uplands from 16,000 feet (took hundreds of photos too) and then walked the 175 miles back to Nepal’s capitol. I was in high school at the time and relieved to be allowed to stay there. And, of course, they brought back maps, which I read avidly. For my parents an essential part of the dream was walking the Himalayan landscape and approaching Everest under their own power. Yes, they had a Sherpa guide and small party of porters, but this was 1965, well before the trekking era set in; only sporadic expeditions of real mountaineers or oddball dreamers visited in those days.

For some reason, around that time, and despite a fascination with and affinity for the upland world, it became clear to me that I was happy confining farflung mountainscapes to maps, that I liked my local hills enough for a lifetime. And that, unlike many of my younger self’s convictions, has held. 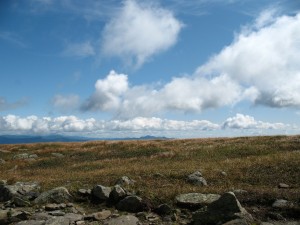 East from Moosilauke, Another Home Mountain

Many years later, when Henry Thoreau’s writings became walking companions, I found expression for the deep local travel that I had intuited as a teenager. It began to seem to me that where I walked and ran was all one landscape, and that, when I traced the contours of one of my maps, I could also use my feet to follow on nearby trails. One day in midwinter I was looking out at the roof-dumped snow just beyond a plate glass door; up its vertical ice, a cold-stunned fly was climbing, making his way higher across the seracs and up the gullies. Surely, that fly was on his own Everest; it was nearby.

So too is mine. No need to hire planes and outfitters; no need to arc across the world; just unfold the local quadrangle and aim for those two bunched contours you’ve never visited…or the ones that puddle like silk dropped to the floor. They all run together underfoot.

This entry was posted in General, Nature, The Roost and tagged Assabet River, Henry Thoreau, Nepal, USGS. Bookmark the permalink.