“The geese have just gone over, making a great cackling and awaking people in their beds. … How indispensable our one or two flocks of geese in spring and autumn! What would be a spring in which that sound was not heard?” ~ Henry Thoreau, journal entries, March 28 and April 15, 1852

I remember the first time I heard the calls from a flock of Canada geese. I was waiting for the bus to take me to elementary school. It was a cool morning. I had just walked the length of our gravel alley and had turned down Rohrer Avenue to stand at the intersection. All along the way, I heard the barking of dogs. It seemed to be a distant sound, made up of a lot of voices, a lot of different dogs. More than we had in our neighborhood, that’s for sure. It lasted for longer than dogs usually barked, too. I looked through the yards around me, searching for some activity in the bushes or on the ground that would show me who these odd guys were and what they were up to. And that’s when a movement in the sky somehow caught my eye. It was a line of big birds flying just above the treeline, heading north. As I watched them go, my young mind suddenly put the image and the sound together. Aha! Not dogs, GEESE! I had heard about them. If I had been a cartoon character, I would have earned the honor of having a light bulb switch on above my head.

Here in the lower valley of the Susquehanna River in Pennsylvania, I hear the sounds of Canada geese on a regular basis. (Even decades later, I still think first of dogs.) Many of the birds stay here all year long. But some must still migrate from one place to another. They traditionally follow the path of the river north, from the Chesapeake Bay to upstate New York. Where they eventually end up, I’ve no clue. Perhaps at a man-made pond next to an office building. 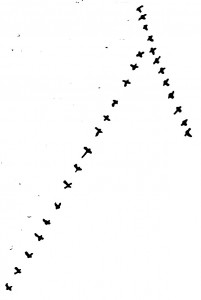 But other voices are calling from our skies these days, too. Some of the flying lines are made up of white bodies, not brown. Snow geese! I saw them feeding on the ice-covered fields that farmers had just spread manure over, too. They were nibbling on whatever little critters flourished in the natural fertilizer. Good for them. Our snow was melting fast, but the ground was still frozen. They had found a good food source, in spite of the weather conditions.

Then one day last week while I was sitting at my desk at work, I heard a different sound coming from outside our windows. I knew it was something flying. At first I was reminded of the other-worldly call of the sandhill cranes, which I was used to hearing when I lived in the Midwest. But they don’t venture this far east. I opened the window for a closer look and listen. These birds were white but they were huge, and they had black bills and faces. Tundra swans! I’d never seen or heard them before. I confirmed their identity and call with Cornell’s “All About Birds” web site. They were heading for a nearby marshy wildlife management area, where reports said that thousands of others had already gathered. Groups of tundra swans continued to pass over us for the rest of the afternoon. At first, I ran over to watch each one of them, stunned in amazement. Then as time went on, I merely looked over from my seat at my computer, to catch a glimpse of the birds through the glass. Imagine, being “too busy” to stop and watch something I’d never seen before. I quietly chided myself for my sorry behavior. And kept on typing.

Yes, everyone is on the move. They’re all following the path to home. The birds are just the most noticeable ones, and they indeed create a stirring sight. But really, we ALL have the homing instinct. And at this time of year, it seems to move inside of us, too. Don’t you just want to jump in the car or lace up your shoes and GO somewhere? I sure do.