One day I was raking leaves. The next, I was shoveling snow and ice. Just this quickly did we move from Autumn into Winter. 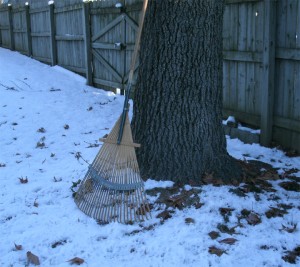 “Live in each season as it passes,” Thoreau wrote in his journal on August 23, 1853. “Breathe the air, drink the drink, taste the fruit, and resign yourself to the influences of each. Let these be your only diet drink and botanical medicine.” He continued at length on the subject, promoting the intake of the foods that surface throughout the year, in a paragraph that would find favor today with folks aimed toward holistic health. “For all Nature is doing her best each moment to make us well,” he claimed. “She exists for no other end. Do not resist her.” This remains good advice, no matter which century it comes from.

I like to go back to his opening credo: “Live in each season as it passes.” He surely didn’t mean just to “live” or to “survive” in each one. He could have easily substituted the words “embrace” or “appreciate.” The changes are going to happen anyway. Why resist them? Why not enjoy them, and see what new fruits they have to offer?

As a confirmed Winter Lover – yes, one friend has even dubbed me a “Snow Queen” – I have little tolerance for fellow Northerners who hate this weather. I freely admit it: I love winter and snow. I can understand how bitter cold temperatures and reduced light can wear upon a human body and spirit. But snow? Snow is beautiful. It evens out the landscape and covers up its imperfections. It says quietly, Look at the freshness I can create out of a place you thought you knew. Snow is good for plant life and for our water supply. Even shoveling it can be a joy, if you time the action and your own movements wisely. And if you don’t know how to drive in it, then stay home. Don’t clutter up the highways with your quirky quick turns or bad braking techniques. Or at least don’t complain when you end up in a ditch. The rest of us will move along just fine. Slowly and surely, and with good tread on the tires. And that’s okay.

Why do our TV broadcasters seem utterly surprised whenever snow and ice appear? They treat the intrusion as an enemy invasion, making it the top story of the day. They send reporters out amongst the falling flakes, where they point to a convoy of maintenance vehicles that have been sent out on a mission to do combat: to either plow away the offensive stuff, or to spew something on the surfaces to allow speedy and necessary travel to resume as quickly as possible. Experts are brought in to tell us how much longer the inconvenience is expected to last. I’m guessing, until at least the end of March. We live in the North, and this is winter.

Now another Thoreau quote comes to mind: the one where he touted his self-imposed title of “inspector of snow-storms.” If he were here today, we’d give him a job. We’d dress him up in an L. L. Bean snowsuit, give him a microphone and a ruler, and aim a camera at him. Inspect away, Mr. Thoreau. Tell us how bad it is out there. Give us a reason to change our plans and to stay home tonight. What if he instead looked at us, looked at the snow, shrugged, and said, “Live in each season as it passes”? What a relief that would be!

This time, our first snowfall was expected. The flakes came steadily, almost in theatrical fashion, falling nicely and evenly and with perfectly vertical orientation. This was no blizzard. And we had no need to go out into it – though at least six NFL teams had to work in it, and their games were fun to watch. The only task I had was to walk a block to the nearest grocery store for milk for the next day’s breakfast. I enjoyed the perks of suburbia as well as the peacefulness of a nice snowfall.

Yes, at this time of year, I like to lie awake in bed at night, listening to the tapping of sleet and snow against the windows and on the roof. I hear the heavy metal scrape of the local snowplow resounding throughout the neighborhood, and the truck’s orange warning light swirls around my bedroom walls. ‘Tis the season, and I’m living in it. I can even say I love it.

I know there are still leaves lying beneath the snow. I should have raked them a week ago, when I had the chance. But you know what? Winter has arrived and has made the world beautiful. I am living in this season now. The leaves will have to take care of themselves.