What affinity is it brings the goldfinch to the sunflower – both yellow – to pick its seeds? … In a day or two the first message will be conveyed or transmitted over the magnetic telegraph through this town, as a thought traverses space, and no citizen of the town shall be aware of it. The atmosphere is full of telegraphs equally unobserved. We are not confined to Morse’s or House’s or Bain’s line. Raise some sunflowers to attract the goldfinches, to feed them as well as your hens. What a broad and loaded, bounteously filled platter of food is presented this bon-vivant!
~ Thoreau’s journal, September 2, 1851

It was not time wasted when I spent a whole weekend watching a set of goldfinches who were harvesting sunflowers at Thoreau Farm. Animals are intriguing when they can ignore human intrusion and focus instead on their own specialties.

The three sunflowers growing in our heirloom garden were top-heavy with seed. Their heads were beginning to turn toward the ground. The birds of the neighborhood were undeterred by this potential challenge of gravity. Somehow they knew it was time to get to work. 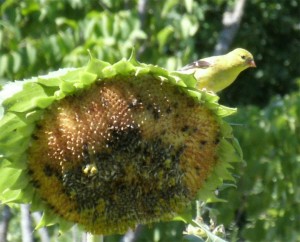 At first, they were just flashes of yellow and black dipping past me, swooping around the garden and chirruping with each dip. (Thoreau referred to the sound as a “twitter,” back in the days before social media changed the meaning of the word.) I must have been deemed an idle threat. The goldfinches didn’t mind at all that I sat just a few feet away, mesmerized, and with a camera aimed in their direction. It took only a few minutes to catch each step of the harvesting process. First, hang onto the sunflower head and pull out a full seed. 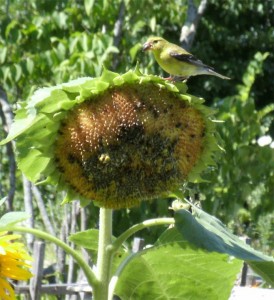 Then fly the short distance to the top of the head and use it as a table. 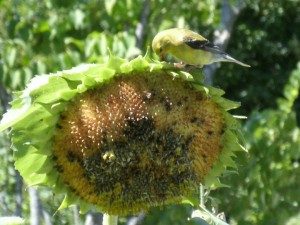 With seed in beak, tap it on the top of the sunflower. The light husk will magically break into two halves and fall to the ground. The seed will drop right down the bird’s throat. 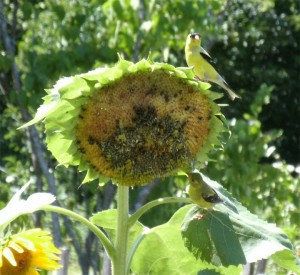 Repeat, until satisfied. Manners: Only one feeder may feast at the head at any one time. Then it’s time for the next harvester to fly in. A few quick chirps confirm the switch.

And so the afternoon passed. One by one, seed by seed, bird by bird. Again and again.

And yes, perhaps they telegraphed their find amongst their own small group. But unlike the birds that Thoreau wrote about that September day in 1851, they didn’t let the rest of the town in on the location of their treasure. Maybe they employed the finders-keepers rule.

Thoreau’s analogy for the sunflower-goldfinch interaction was a “bounteously filled platter of food” to a “bon-vivant.” My dictionary defines the French term as meaning: “A person who enjoys good food and drink and other luxuries.” To a group of goldfinches on one end-of-summer afternoon, a garden full of sunflowers proved to be one of life’s little luxuries.